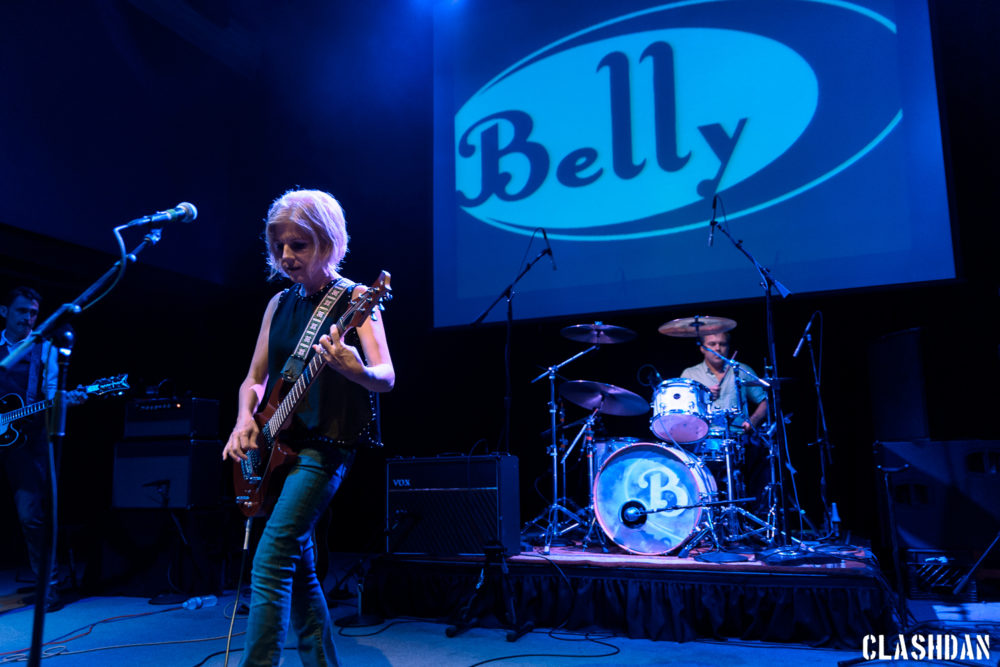 In the early 90s Belly was a staple on MTV, appearing regularly on the shows Alternative Nation and 120 Minutes. Sliding in on the backside of Grunge, Belly combined a unique introspective and brooding voice with power-pop hooks and an atmospheric soundscape that provided a smart poppy alternative without losing the power and impact. After having grown up in Throwing Muses and playing with Kim Deal in the Breeders, Tanya Donelly formed Belly in 1991 with Tom and Chris Gorman on guitar and drums, and Fred Abong on Bass. They would release their first album Star in 1993, shortly afterwards Abong would leave and be replaced by Gail Greenwood. Belly’s take on art inspired alt-rock generated a significant buzz and Star’s standout single “Feed The Tree” was a staple on college-radio. Star would go on to become a critical success having been certified gold, reaching number two on the UK album chart, and being nominated for a Grammy. Belly’s follow-up album King was released in 1995. King was a more focused and harder edged effort with a more produced and polished sound. While certainly not from an artistic or musical perspective, the album suffered from the curse of the sophomore slump and was not critically embraced like Star. Only one year later, Donelly would call time and Belly broke up. Rising from the ashes of Belly, Tanya Donelly would focus on motherhood and other interests, and go on to have a quietly successful solo career.

After twenty-one years of lying dormant with fans having long since given up hope of a reunion or any further music, Belly updated its official website earlier this year. They announced the band’s resurrection and a plan to return with a summer tour and the promise of some new music. The reunited lineup picks up where they left off after 1995’s King, with Tanya Donelly on vocals and guitar, Tom and Chris Gorman on guitar and drums, and Gail Greenwood on bass. Having made its way through the UK, the tour has made its way back to the east Coast of the US and after a triumphant hometown visit to Boston, recently stopped at the 9:30 Club in Washington DC where Concert Addicts caught the show.

As fans filled the 9:30 Club there was a palpable feeling of anticipation and excitement. Such is the devotion and hunger of Belly fans that many had been queued outside the club hours early to be certain of a spot up front and close to the band. Several had already attended multiple shows and were comparing setlists and performances. As the lights dropped, the crowd was treated to a video featuring dogs riding a scooter to the soundtrack of Belly performing “Think About Your Troubles,” and then as if they had never left, Belly were back. Everyone had huge grins as Gail stepped forward and asked “Are you ready to party like it’s 1993?” and the band launched into a rollicking opening salvo of “Dusted” and “Slow Dog” from Star. Without an opening act, the band split the night into two sets and over the course of almost two hours managed to throw in just about everything but the kitchen sink. They covered the songs from Star and King including favorites, “White Belly,” “Low Red Moon,” “Gepetto,” “Red,” and “Seal My Fate.” They stirred in a selection of B-sides with “Spaceman” and “Thief,” and even added in two new songs, “Punish” and “Comet.” Certainly no Belly show would be complete without the band’s biggest songs, “Feed the Tree,” which got the loudest and most vociferous response from the crowd, and “Super-Connected,” which sparked a massive audience sing along with its super catchy chorus. Throughout the show there was an honest feeling of joy. You could see it on the faces of each band member, as they smiled and joked with each other and the crowd. There were several times that Tanya and Gail would lock eyes and break into huge grins. This was definitely a band that was enjoying every bit of their rarely achieved second 15 minutes of fame.

While recent times have offered up a plethora of reunions, with many of them seeming like nothing more than a quick cash grab off the back of nostalgia, Belly’s performance felt more like old friends re-connecting and remembering their shared love of writing and performing music together. Their songs sound every bit as fresh and vital as they did twenty-one years ago, and with the promise of new music, it feels safe to say Belly is truly back. The only question is how long will we get to enjoy the current run? Don’t take any chances on missing out. Catch them if you get a chance… You won’t be sorry.