The Empire Belfast is a quaint and classical venue with all the whimsical charm of a bygone era. The lineup that played there this Thursday was anything but! Headlined by UK group Black Peaks, whose star is steadily rising in the hardcore scene, a tight-knit group of fans was treated to a powerhouse performance packed with movement and energy. The bands blew the doors off the regal venue with unadulterated rage and darkness, yet not devoid of certain unique charms of their own.

Opening the show was Dublin group LNT, who brought a captivating fusion of heavy hitting yet spacey art house sound. Channelling his inner Thom York, lead singer and guitarist Kev Peelo navigated a delicate space between vulnerable, world-weary vocalizations and impassioned screams. As the band walked the line between refreshing synthy tones and overdriven crescendos on the chorus, they produced an intriguing sound that dares to defy genres. Mixing in muffled radio broadcasts to their tracks, LNT held my attention and kept it locked in with their aural experimentation. 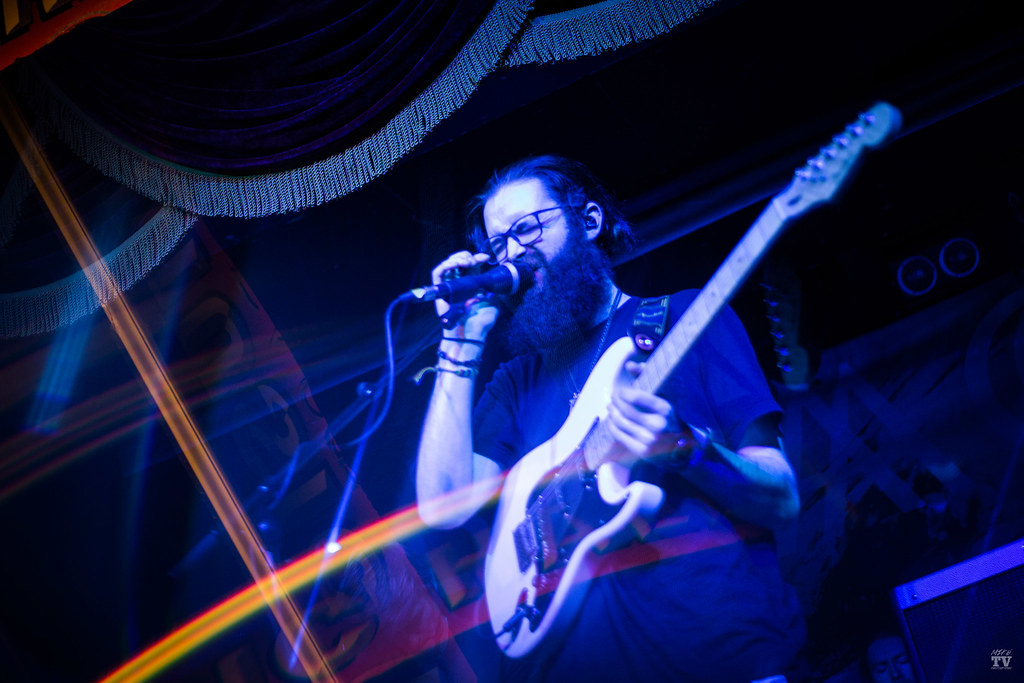 Offering up their new single, “Revolving Door,” the group ended on a weighty note compared to all the muted buoyancy in their set, and certainly not the highlight of the performance for me. ‘We’re normally the band so loud and heavy that people actively leave,’ Peelo commented bemusedly, “so thanks to Black Peaks for making us feel soft.”

And sure enough, things only escalated from there with second support band Ilenkus, raising LNT’s discordant glory by a few notches to nothing short of (organized?) chaos. Taking full advantage of vacant semi-circle between the, at this point, sparse audience and the stage, animated frontman Chris Brennan started the set by emitting a bassy primal scream lying on his back in the middle of the venue floor. The songs that emerged, taking everyone off guard, were each like a short but strong nuclear blast, radiating hot waves of vitality. My brain puzzled at how something so hectic and loud could be so technical and precise—mathcore in the truest sense of the word.

Unlike most bands, who may hit the floor once or twice during a set, Brennan was living down there, using the whole space for his erratic dance moves, and using the opportunity to commune with the people, putting his arms around unwitting concert-goers and shaking hands. When he wasn’t perching atop a stack of amps like a screeching demon bird, he was throwing himself recklessly off stage and bellowing into the mic from the spot it had hit the ground. Wrapping the mic cord around his neck, arms rattling like machine guns to the punchy beat, head scanning the crowd like a threatening drone, no one could take their eyes off this dynamic showman. 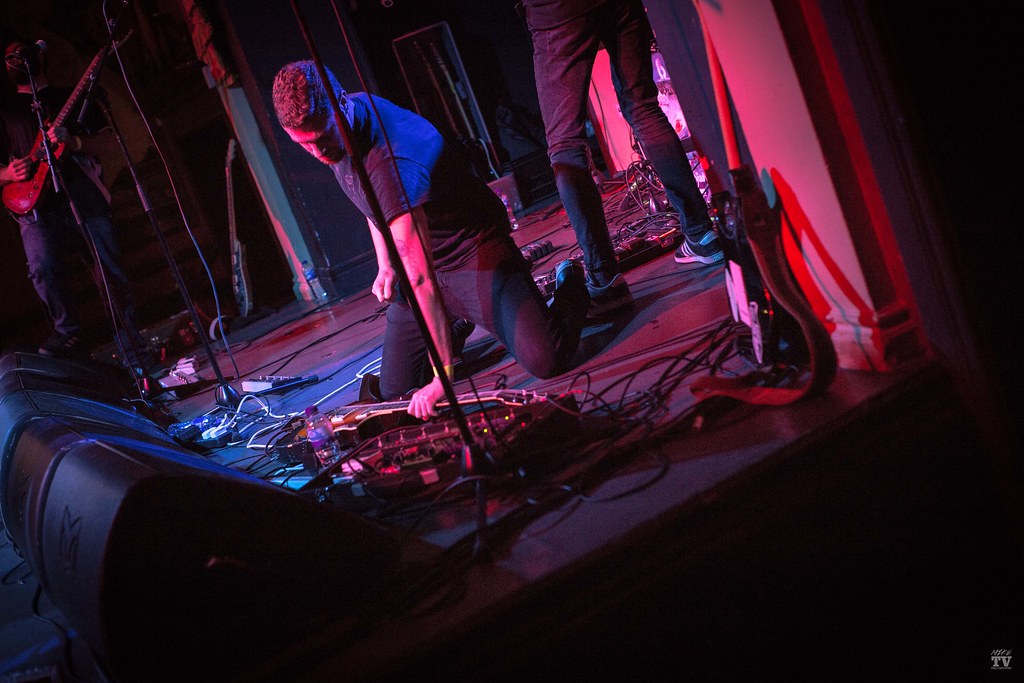 With a screeching call and response, nearly the whole band took their turns battering their vocal chords in demented harmonies, and each of the three guitarists took the lead for a few songs. That’s right, three guitars—three guitarists scratching and shredding, (literally) punching their instruments and pounding them into the stage, snapping strings, purging their insides, contorting their bodies—a thrashing master class while bellowing ‘It’s time to torture this world!!!’ In a word: intense. Newbies beware.

A spacey throb filled the room and Black Peaks filtered on stage. Lead vocalist Will Gardner took one look out into the room and, with a simple hand gesture, drew everyone in attendance down from their seats and onto the floor. The Empire has so many little hiding places and seated tiers, but in an instant, they were completely empty and the floor was packed, as it should be at this kind of show. 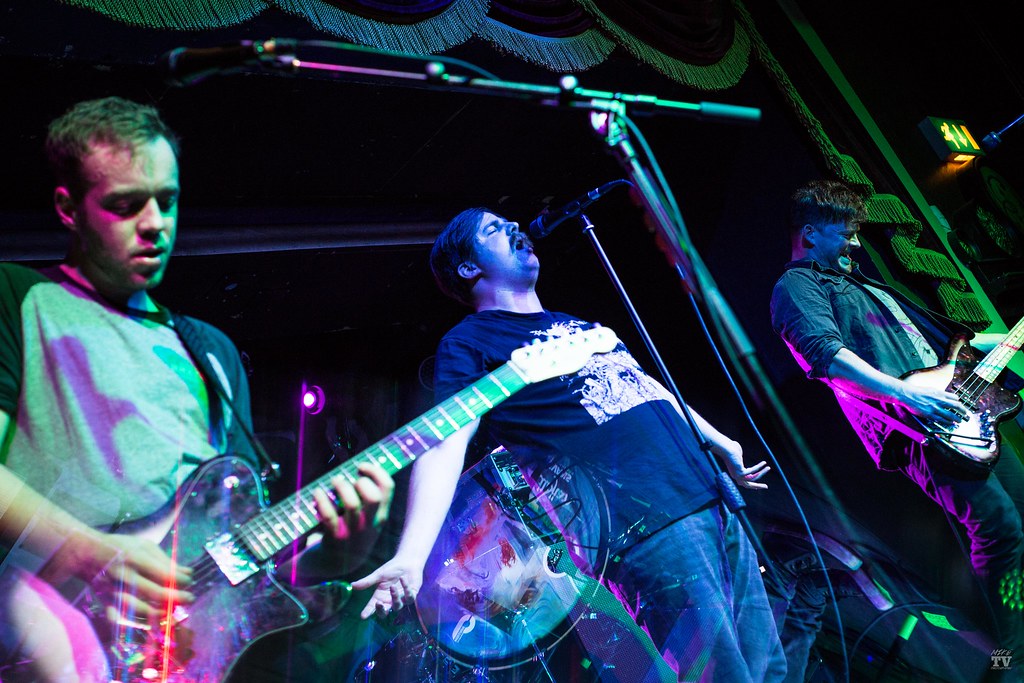 On this, the first date of a tour promoting their brand new album, All That Divides, the audience was clearly adamant fans, singing along and banging their heads from the start as Peaks showcased freshly-pressed tracks. Immediately I could see why this band has so firmly taken root in the hearts of prog metal fans in such a short space of time. Their sound is thoughtful and well-balanced, extremely catchy—and this was only heightened being performed live.

Drummer Liam Kearley was in the zone, locking into the beat with his whole torso. On “Electric Fires”, I was marvelling at how bassist Dave Larkin, slowing things down with heavy bass notes, could produce a sound as rich as the lower echelons of a grand piano to a cinematic effect, and later during “Aether” how he managed to emulate a bowing cello. The complex guitar soloing of Joe Gosney captured the mood of each impassioned song, which oscillated from scathingly political to the deeply personal. 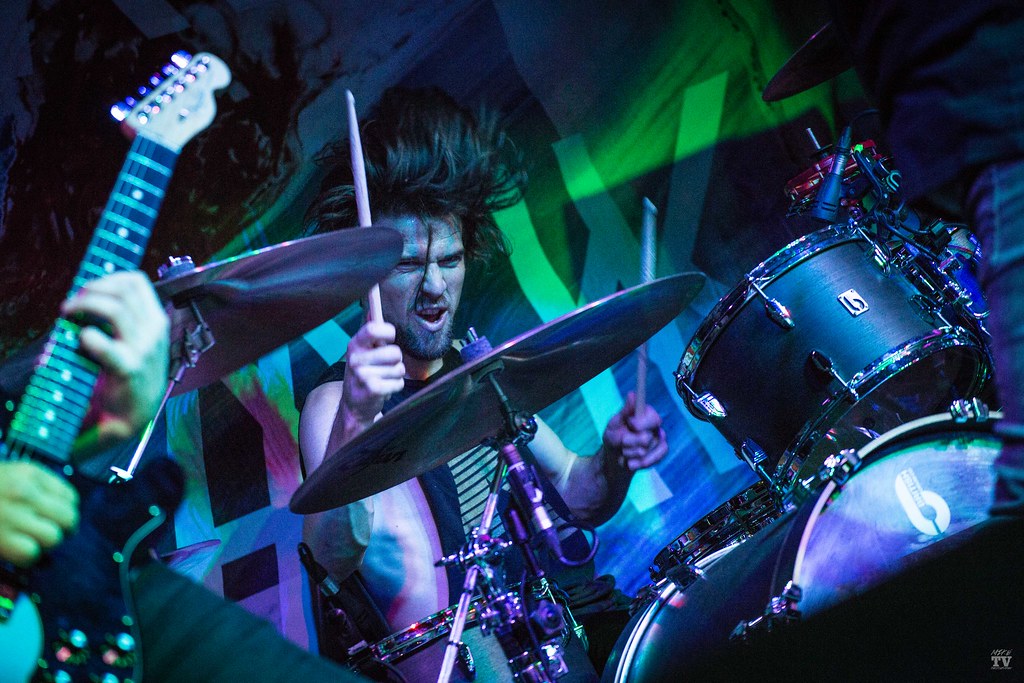 Bringing it all together, of course, was Gardner, looking like such a nice guy, like everyone’s mate, and then bubbling over with blood-curdling screams. A few songs in he once again used his influence to incite a mosh pit with a simple twirl of his powerful digits, the crowd getting amped, catching the dark fury coming from the other side of the stage. Kneeling on the edge of the stage during “Crooks” from their first album, Gardner embraced his people, preaching with outstretched arms: ‘Take what they stole, give what they took away.’ The echoing effect on Gardner’s mic and ghostly unison with Gosney created fascinating lullabies to cause insomnia.

‘You’re making this magic,’ Gardner gushed, who explained that he was scared when looking at ticket sales. But the Belfast crowd pulled through, losing their minds during “Eternal Light”, hands clapping unprompted, their bodies crashing to the heated tunes. Flashing a devilish yet sincere grin, Gardner’s vocals were like a conversation between alter egos, weaving from exposed falsettos to guttural screams sustained for impossible lengths. Speaking to the upsetting uncertainty of the UK’s current situation in new track “Home”, Gardner’s minimalistic yet poignant lyrics resonated the thoughts of many. 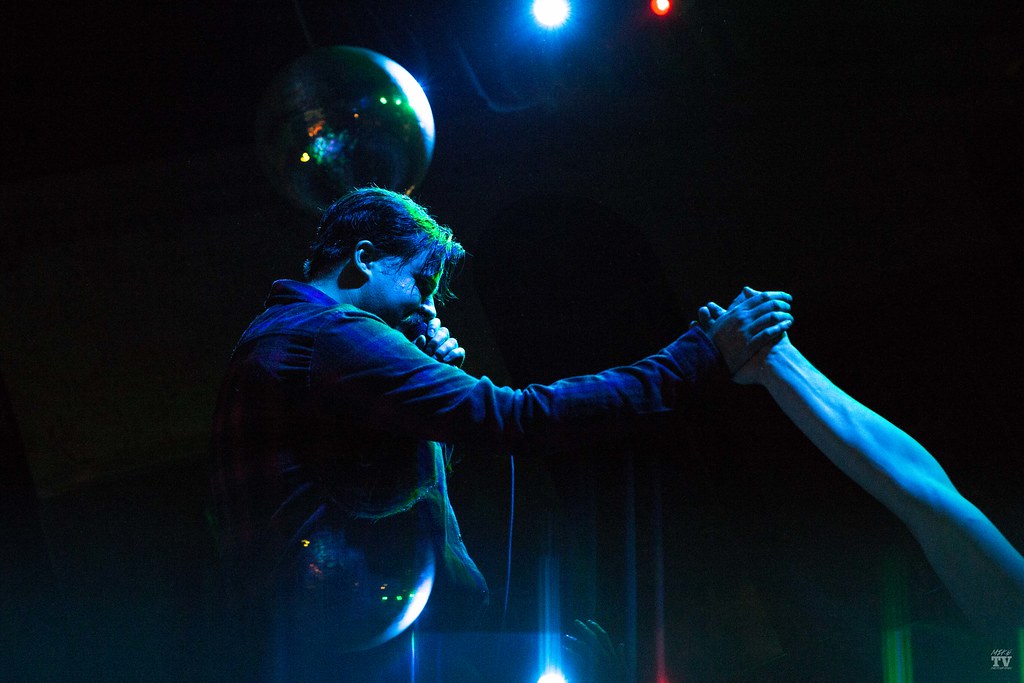 The show hit a climax with a rousing “Glass Built Castles”, a banging track off of Statues, and concluded with recent release “Fate”, during which Gardner parting the seas and arduously dragging the mic stand all the way to the back of the room from where he bellowed the final notes, running amongst the audience before wrapping up the night without an encore. While fans were left begging for more, the band members were glowingly eager to mix with the crowd, selling their wicked merch and mingling, clearly basking in the adoration of an astonished crowd. The scene had a humbling effect of making Black Peaks feel more like your buddy’s band than the prog-rock juggernauts that had just taken the stage by storm.