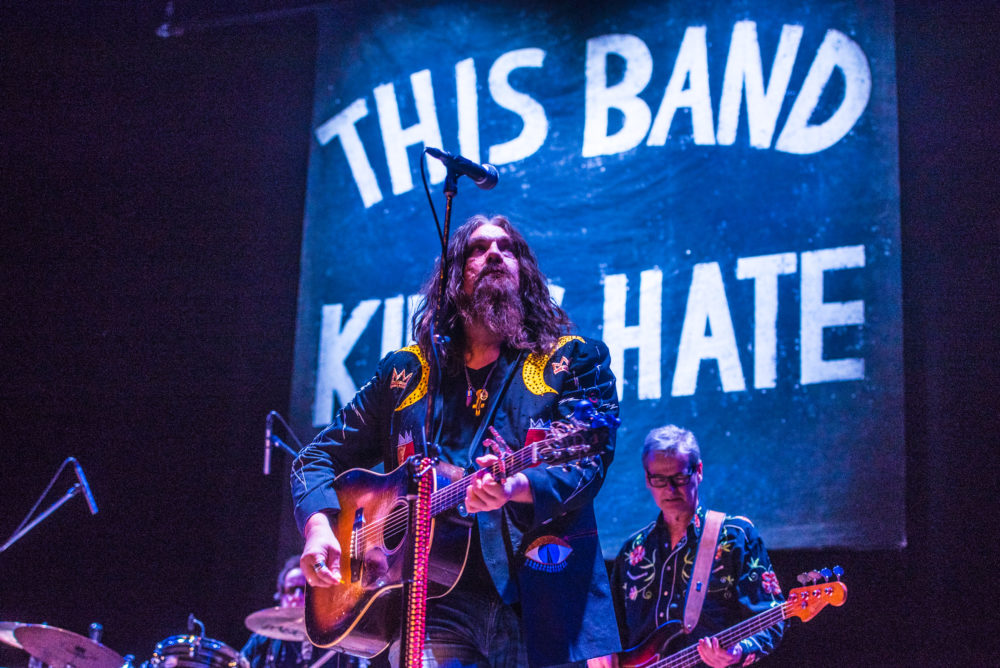 Blackie And The Rodeo Kings are a rock/folk alt-country trio that hails from Hamilton, Ontario. The trio is made up of guitar and vocalist Tom Wilson, (the former lead singer of Junkhouse, The Florida Razors and his solo act, Tom Wilson) , solo artist Stephen Fearing , and guitarist and producer Colin Linden. Blackie and the Rodeo Kings was started as a side project that soon took on a life of it’s own. The trio has gone on to produce 9, full-length studio albums and has received many awards and nominations including a Juno Award for Best Roots & Traditional Album in 2000. The talented individuals in this group have over a century of musical experience to pull from and it truly shows as they perform live!

The concert was held at the iconic Jack Singer Concert Hall in Calgary. It’s a beautiful concert space and the acoustics are incredible. The home of the Calgary Symphony made for a sweet sound stage for Blackie and the Rodeo Kings. On the trio’s Calgary stop they were joined by special guests Ian Tyson, Lindi Ortega, Murray McLauchlan and Thompson Wilson.

BARK opened with their hit Water Or Gasoline, and there’s nothing like a rocking blues track with ripping slide guitar by Colin Linden to set the stage for an epic music journey. Next up was the track Stoned sung by Tom Wilson. Tom has an amazing voice, a deep, rich bass along with his songwriting skills it really is like ear candy. Throughout the evening the band was accompanied by the special guests including Thompson Wilson son of Tom Wilson. They did a duet of Beautiful Scars and it was one of those cases where the apple does not fall far from the tree. Thompson already has a great sound and style of his own fans will certainly be looking forward to hearing more from him as his music evolves. Next up was Lindi Ortega, a beautiful country star with an equally beautiful voice. Lindi originally hails from Toronto but moved to Nashville to pursue her music. This is where Lindi began working with producer Colin Linden to record her album Cigarettes and Truck Stops and she performed an amazing version of the title track from this album with Blackie and The Rodeo Kings.

The next special guest up to stage was the legendary Ian Tyson who got a standing ovation when he walked out on stage at 83 years old! He is no stranger to this part of the country and he was certainly loved by the crowd tonight. Ian sang with the band along with Lindi Ortega and it was a stunning performance. The last special guest of the evening, and certainly not the least, was Murray McLachlan. He played one of his hits Henry Moore with Blackie and the Rodeo Kings. Murray has had an incredible career to date and it was great to see him join the band tonight and blow the audience away with his harmonica playing.

The rest of the evening was Blackie doing what they do best, putting on a great live show. Tom Wison had mentioned he was about to join the 60 club but is showing no signs of slowing down.  The Band thanked Calgary from coming out to their show and their continued support. Tom told the audience that its always great to be back in Calgary as the true love here for Blackie and the Rodeo Kings as well as IanTyson, Lindi Ortega, Murray McLauchlan in the music scene is evident.