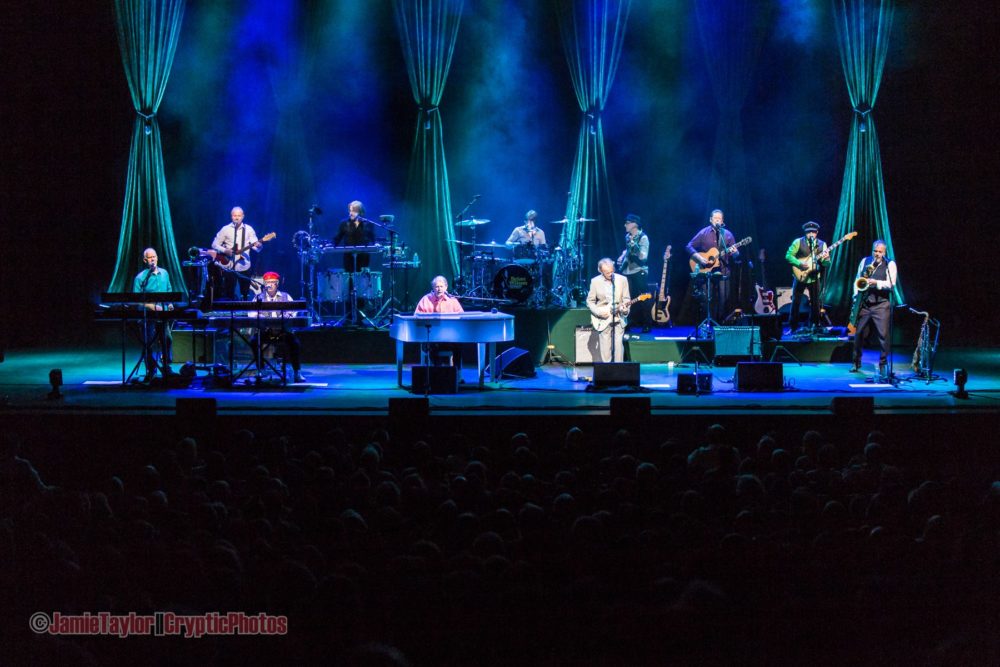 Imagine you’re marooned, all alone, on a desert island. You have food, water, and shelter. Beyond this, however, things are rather dreary. You have neither fields to frolic nor forests to forage. No three little bears, and no perfect porridge. No pen nor pad; no mum nor dad. Your needs are satisfied, but you want for plenty.

This goes on for months. In a final act of desperation, you jam your hands into your pockets and search for a doohickey, a paperclip, anything to crack the cognitive cufflinks that the nature of your reality has suffocatingly seized upon any of the seeping, slowing, sanguineous vigor that still remains within.

I was feeling marooned and alone last week when I received the news that I was to review the Brian Wilson (& friends) Pet Sounds 50-year anniversary tour on Saturday, the 8th of April. Brian Wilson is, in my generally humble but now, in regards to this manner, bullish opinion, one of the greatest compositional minds of all time. I also believe with similar conviction that Pet Sounds is one of the greatest musical compositions of all-time.

Accordingly, it sits high atop my list of Desert Island Albums. No matter how many times the playful chimes of “Wouldn’t It Be Nice?”, dance delicately out my speakers, I always crack a smile. Brian’s gift is his ability to take the moroseness of life and set it beautifully and playfully with a childlike innocence. In some ways, Brian is very simple – a minimalist even. His lyrics are complex but use simple language. His compositions seem odd from the perspective of the sheet music reader but ordinary to the casual listener. I can vouch for that since I was exactly that listener*. As a fourteen or fifteen-year-old, I thought the Beach Boys were absolute bubblegum.

While recording Pet Sounds, Brian Wilson’s cousin, fellow Beach Boy, and current Beach Boy touring frontman Mike Love is supposed to have lamented the fact that the arrangements and lyrics Brian and Tony Asher, respectively, had composed for Pet Sounds were such a far cry from what was expected from The Beach Boys that they might have well re-named themselves The Brian Wilson Band.Band.

Love was right. To take nothing away from Love and the original configuration of the Beach Boys, Pet Sounds simply cannot be reproduced without the helping hands of several multi-instrument maestros.

The band consisted of two percussionists, two keyboardists, one saxophonist/flutist, up to six guitarists, several vocalists, and then Brian, on vocals and piano. In total, there were between 10-12 people playing an instrument at all times.

Brian was rarely the focal point of the live performance. His voice was far from the strongest amongst those flexing pipes up on stage and, unlike the wind-wielding, key-toting, multi-instrumental magician Paul Von Mertens, Brian stuck solely to vocals and his old blue piano.

The brilliance of Brian Wilson has never been in his on-stage performance, however – at least not in the conventional sense. No one will ever confuse Mr. Wilson for Freddie Mercury, but it’s hard to think of anyone who can compare to Brian. From the train sounds and barking dogs, to the whispers and mumbles masquerading as regular old background vocals, to the use of a main bassline in B major and a secondary bass playing a G# note to specifically underscore the words “love”, and “fail”, Pet Sounds constantly and flagrantly breaks the rules of pop composition and yet, somehow, doesn’t seem to be so much as toeing the line. Not only was Pet Sounds one of the most concise, eclectic and synergistically chaotic pop albums of all-time when it was released in 1966, but the bridges, reprisals, and outros that Brian has incorporated into the live version of the album over these past fifty years fit seamlessly with the quiet complexity of the original.

I’ve listened to Pet Sounds at my house, in the shower, in the bath, working out, running, busing, driving, walking, in the library… many, many times over. After well over one-hundred listens, I know every sound on the album about as well as I do nearly anything else. So, when Brian added a reprisal at the end of “Don’t Talk (Put Your Head On My Shoulders)” and transitioned from “Let Go Away For A While” to “Sloop John B” with a symphonic lullaby style saturation of sound, I experienced what was one the giddiest moments I’ve ever had listening to music. This, in turn, ranks quite high in my sum-total giddiest moments. By the time the band played “Love and Mercy” to close out the encore set, I was close to tears. The opportunity to see the musical genius of Brian Wilson with a 12-piece band at his disposal was truly a dream come true.