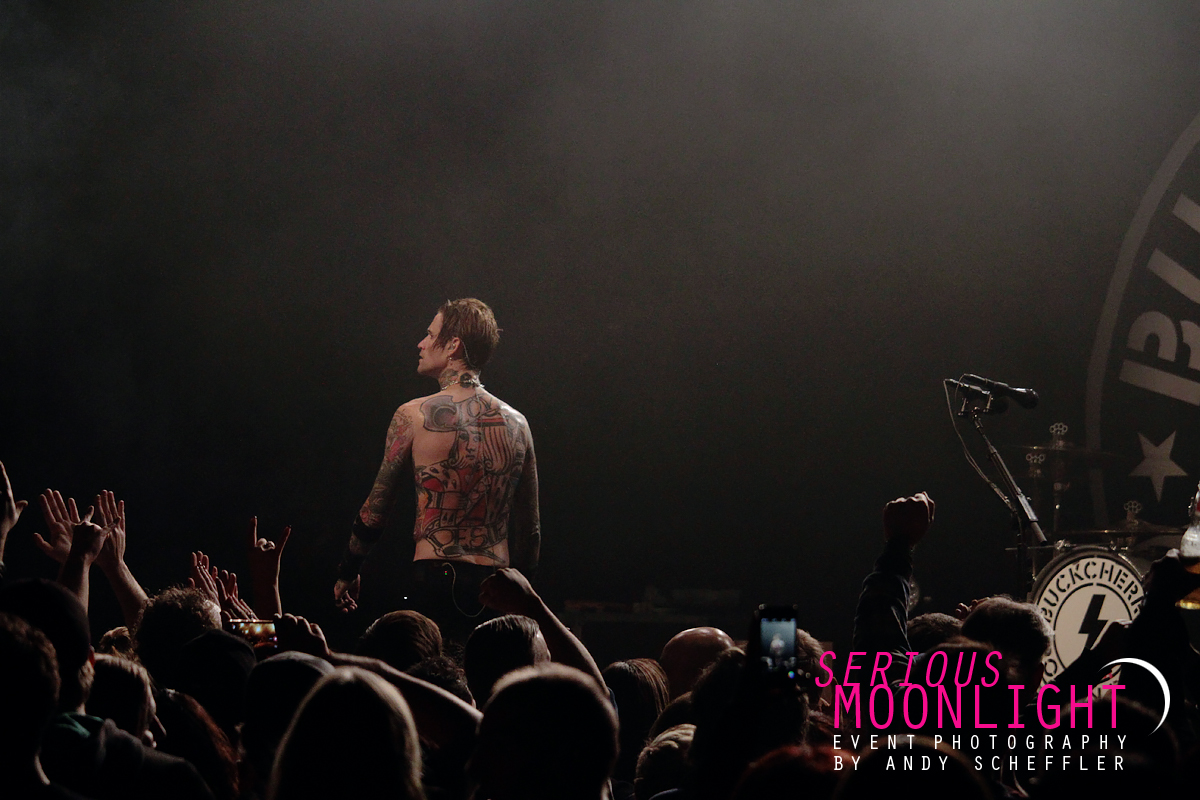 Pigeon Park came out flying tonight with a big presence that certainly won over whatever folks in the room that weren’t already familiar with the Vancouver-based band. Guitarist Kevin Okabe is particularly energetic, bounding around the stage with knees up, flinging his hair about and sometimes collapsing onto his back on stage while playing. Singer Nick Weber uses up the stage, getting in the faces of his bandmates wherever they happen to be up there. Their music is loud, wailing blues-kissed rock, actually kind of bringing me back to the Slash/MK&C gig a few weeks back. I’m not super familiar with their songs, and was trying to discern some song titles or key lyrics while listening, but I failed miserably at that, and all I can really say is that at some point, Weber pointed out they were about to perform a new song, “…and if you rock out, I will touch you in places that… anyhow…” and off they went.

Buckcherry was up shortly after. These guys I honestly didn’t even realize were still around until I saw this show announcement. I saw them once before in 2001 at a now-closed bar in the wilderness of Burnaby, and then became familiar with singer Josh Todd’s solo work, and then lost track of them. Their brand of big, grating rock n’ roll was really definitive of that early-mid new millenium time, and though the musical climate has changed a lot over the years they have been together, they still have a solid subset of fans without a doubt. I actually really love this kind of sleazy rock anyhow. It’s not my main go-to, but it is a guilty pleasure! They started big with their massive hit “Lit Up,” and seemed to dip into the back archive a lot through the show, considering how much of the music I knew. “It’s so good to see y’all on a Thursday night. Y’all are beautiful!,” Todd bellowed to the room after the first few tunes.

I have to say I was pretty surprised to see them bring a saxophone player out for a song partway through the set. In a somewhat awkward moment, Todd also referred to the openers as Pigeon Farm, and, well, unfortunately that is what was typed onto his ‘cheat sheet’ that was taped to the floor of the stage beside his set list, along with the city name and a note about signing CDs after the show. Most of his banter between sets though was pretty ranty and difficult to make out, other than a lot of swearing. Nearer to the end of the set, he peeled off his sweaty tank top (he had long since removed his glitzy suit jacket that he walked on stage in) to spend the rest of the show bare-chested, where barely a speck of him was revealed to not be well-covered in elaborate tattoo work. The whole band actually must be upping the income of some tattoo parlours. Vibrant guitar players Stevie D.and Keith Nelson, as well as drummer Xavier Muriel were showing a lot of skin, also well-inked. Muriel’s hair was up in brilliant, shampoo-commercial swirls all night due to some conveniently-placed fans blowing at him from below. Stevie D. was incredibly engaging, spending a lot of time chucking picks out into the crowd, interacting with people, and even taking phones from a couple of fans to walk around stage record a video of the band members each waving hello to it. They put on a slick show and really got that room pumping.