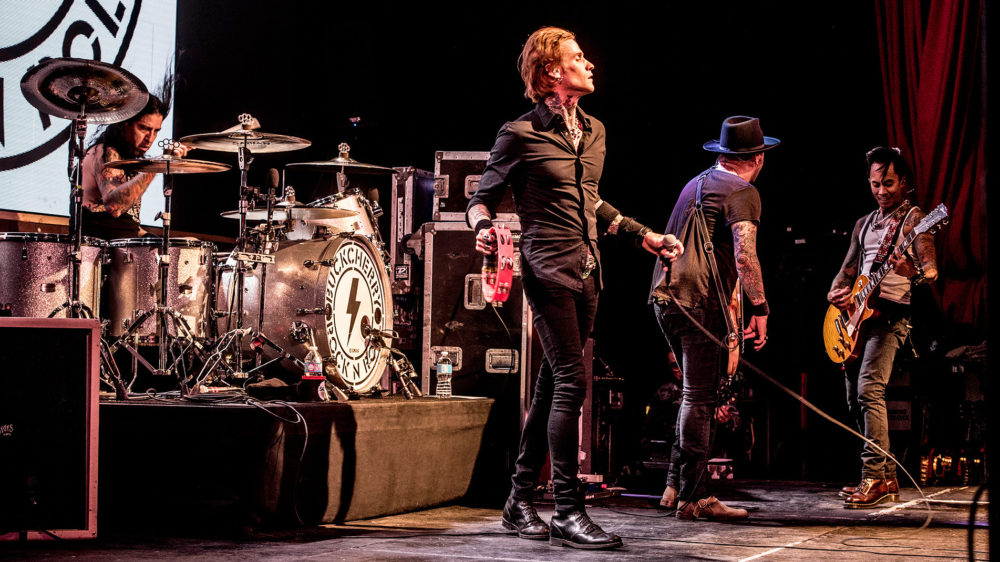 The venue was packed from wall to wall at Cowboys Dance Hall in Calgary. The first act to take the stage was The Wild. It was nice to see the boys back in town and giving another epic performance. The Wild were in Calgary not too long ago touring with Airbourne and it looks like these guys are building momentum coming off that successful tour and joining up with Buckcherry and Sebastian Bach. Since their first Calgary show, The Wild released a new single, Ready to Roll. The Wild has cracked the top 20 rock charts coming in at number 18! Congrats and wising them continued success. it was great to see the band after the show with their fans out at merch table signing autographs and taking photos.

Sebastian Bach, the original voice of Skid Row, was up next. Joining him was Bobby Jarzombek (drums), Rob De Luca (bass), Brent Woods (lead/rhythm guitar). They hit the stage playing Little Wing. The rock’n’roll ride continued with a ton of hits from classic Skid Row albums. Sebastian was very engaged with his audience and often talked to them during and between songs. He told everyone that he loved GOOD music and it didn’t matter if it was rock or country which was fitting considering the venue and the country tinged sound of a couple of songs. Sebastian also shared with the audience that he had visited a local music landmark here in Calgary-Recordland. He was rockin’ a Recordland t-shirt and encouraged everyone to check out this hidden gem. For those that don’t know, Sebastian Bach is an avid music memorabilia collector of anything Kiss related or rare.  Sebastian Bach’s house and music memorabilia collection were destroyed by Hurricane Irene so he’s always on the hunt to restore his collection to it’s former glory. Close to the end of the performance, Monkey Business morphed into the instantly recognizable Rush hit, Tom Sawyer. The band paid homage to this legendary Canadian hall of fame band and Sebastian let the audience know he was a proud Canadian as well! The crowd erupted when Sebastian sang,Youth Gone Wild, a mega hit for him. The crowd raised their fists and sang along. During the song, one lucky fan was pulled on stage for a selfie. Even after almost 3 decades, Sebastian Bach clearly still loves to perform and loves his audience.

The last band of the night was Buckcherry. The members of Buckcherry are, Keith Nelson (guitars), Stevie D (guitars), Xavier Muriel (drums), Kelly LeMieux (bass), and Josh Todd (lead vocals). Josh hung back at  the side of stage getting pumped up. He was moving around like a fighter getting ready to enter a a boxing ring.  And with that, a fight announcer called them all on to the stage. Josh hit the stage and it was on! Buckcherry opened up with Sunshine. The crowd responded and rushed to the front of the stage. The energy was high and the band played all of their major hits. Buckcherry is currently celebrating the 10th anniversary of the Album 15 – Time flies! Josh told the audience that he was happy to be back in Calgary and celebrating this milestone with Sebastian Bach and The Wild. Bucjkcherry also introduced the crowd to some of their new music by playing the song Tight Pants off their latest album. The band welcomed a guest saxophonist and horn section to the stage to funk up this fresh cut.The show ended with a classic Buckcherry hit –Lit Up- sending those close to the front of stage into a hair whipping frenzy! The show ended with a bow from the band and the audience ready to embrace the rest of their weekend. It was a great show!