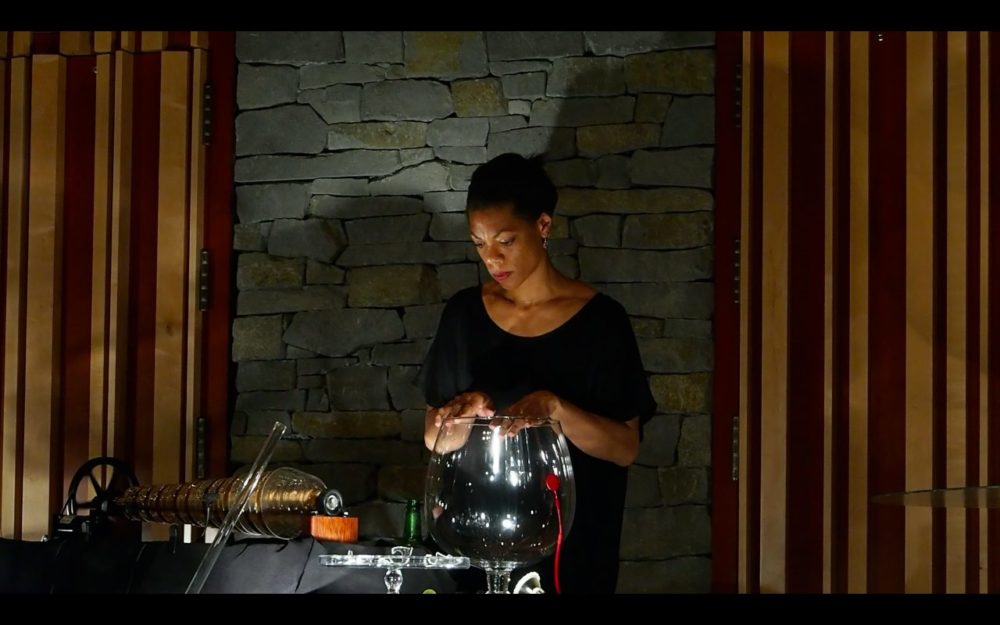 On Saturday evening, I had the privilege of attending Songs for Glass Island; a music-cum-art performance inspired by a grandiose conceptual art piece by Robert Smithson. In the original work – titled Glass Island – Smithson proposed spreading 100 tons of glass along the Strait of Georgia, getting as far as gaining approval from the Canadian government before the plan was prematurely struck down by environmentalists. In a much more eco-friendly revival by Camille Norment and the Experimental Music Unit, Songs for Glass Island tells the story from an aural perspective. It was beautiful, it was haunting, and it was no doubt a little bit odd.

Strewn across the stage were all sorts of glass objects – wine glasses, glass sheets, a recognizable Jägermeister bottle – with the focal centre being armonica. The armonica is an instrument invented by Benjamin Franklin in the 1700’s (esoteric is an understatement here). It creates sound using the natural vibrating frequency of glass by means of friction. Imagine rubbing your finger around the rim of a wine glass to get that eerie humming pitch, then multiply that by the notes on a scale and you’ve just captured the armonica in its essence.

The armonica is known by few and mastered by even fewer; fortunately Camille Norment fills both categories. Teaming up with Tina Pearson, George Tzanetakis, and Paul Walde of the EMU, Songs for Glass Island was created over a two-month period during Norment’s residency at the University of Victoria. For the live performance all four artists settled in amongst the littered glass display, taking to their respective “instruments” to complete the portrait of a sonic landscape.

Although the piece did not seem to have a traditional narrative, it excelled in capturing not only what you may have heard if you had been present for the hypothetical Glass Island but also in displaying an incredible variety of range from one common medium. Each piece of glass held inherent sonic qualities depending on size, shape, and how they were interacted with. For instance, taking the same violin bow to two separate bowls created an ethereal tone in one and a violently abrasive tone in the other.

Throughout the performance, each artist used different techniques and tools to interact with the glass in front of them in order to evoke responses from the crowd. The screeching of a drumstick around the edge of a glass sheet produced a palpable cringe in the audience, while the armonica seemed to induce a calming feeling. The actual resemblance to recognizable sounds was perhaps the most impressive part. Whale songs, crashing waves, and falling rain seemed to echo through Pyatt Hall as the artists worked their way through the glass menagerie.

Songs for Glass Island was a very limited run, just three shows, but likely will not be the last collaboration between Ms. Norment and the EMU. Thank you to the Contemporary Art Gallery of Vancouver for the invitation and opportunity to see something a little bit outside the norm.

All photos and words by James M.