“You know, it’s exactly a year to the day that we last played Belfast, in this very venue… But don’t go googling that!”

So proclaims Chad I Ginsburg of alt-metal outfit cKy, and he’s not too far off! Indeed, merely 348 short days have passed since the Pennsylvania band’s last visit to this very venue and, as per usual, forces have turned out to bear witness to the spectacle that is always a cKy show.

First up, and without hesitation are Los Angeles rock & roll veterans Bullets and Octane, who take to the floor (quite literally) to an unfortunately mostly empty Limelight 2. Ever the present and cajoling front-man, Gene Louis is hardly deterred, canvassing the entire club and every patron in it like your charming, local rock n’ roll dealer. Kitted out in a worn-in, studded leather jacket, plastered in B+O references from an illustrious history of touring and partying, Louis totes his microphone in his identifiable manner, making his introductions with an audience slowly building in numbers—hardcore fans anticipating a night-in with three rock juggernauts. 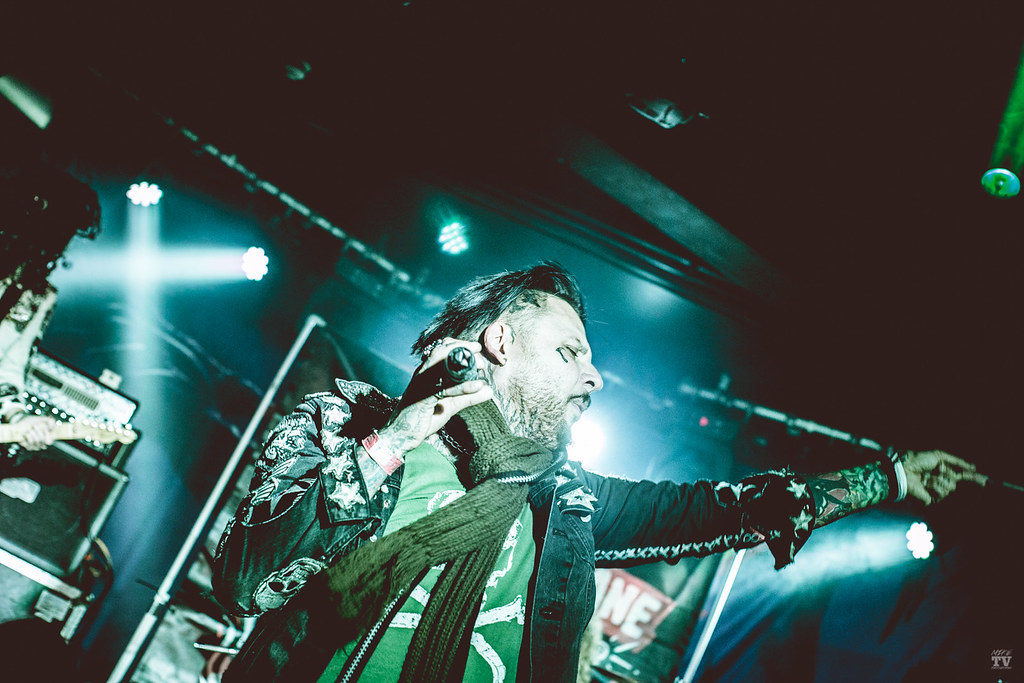 Working out the kinks in the sound during the first song, from the bands latest, Waking up Dead, it’s only when Bullets burst into “Going Blind”, from 2006 sophomore release In The Mouth of the Young, that the full drive of this band becomes apparent. And whilst Louis is belting out lines in his gravelled yet strident voice from the floor, the band, made up of Guitarist Felipe Rodrigo, bassist Zachary Kibbee, and power-house drummer Jonny Udell (of B+O tour pals from years past, The Knives) remain staged like totems. Not to say that they are static. Not in the slightest. In the midst of the chaos with Louis free to roam, one can only steal glances, darting quickly back and forth from the floor to the stage. When setting eyes on the stage, the scene resembles that of a cartoon scrap – a ball of dust bounding round and round, with drums sticks and guitar picks literally flying up and out in every direction.

In the course of their set, Bullets scroll through “Cancer California” (from aforementioned 2nd release, a track not played live for a decade until recent resurrection) to the comparable recent material of Waking Up Dead’s titular track. While it is apparent that the bands earlier material resonates all the louder with audiences, one thing is clear: Bullets’ brand of LA-sleaze hard rock will always be in demand. Certainly when presented live it is impossible not to get caught up in it’s tidal current, an encouragement to throw caution to the wind and party! This call was definitely heeded and answered by some members of tonight’s audience already! 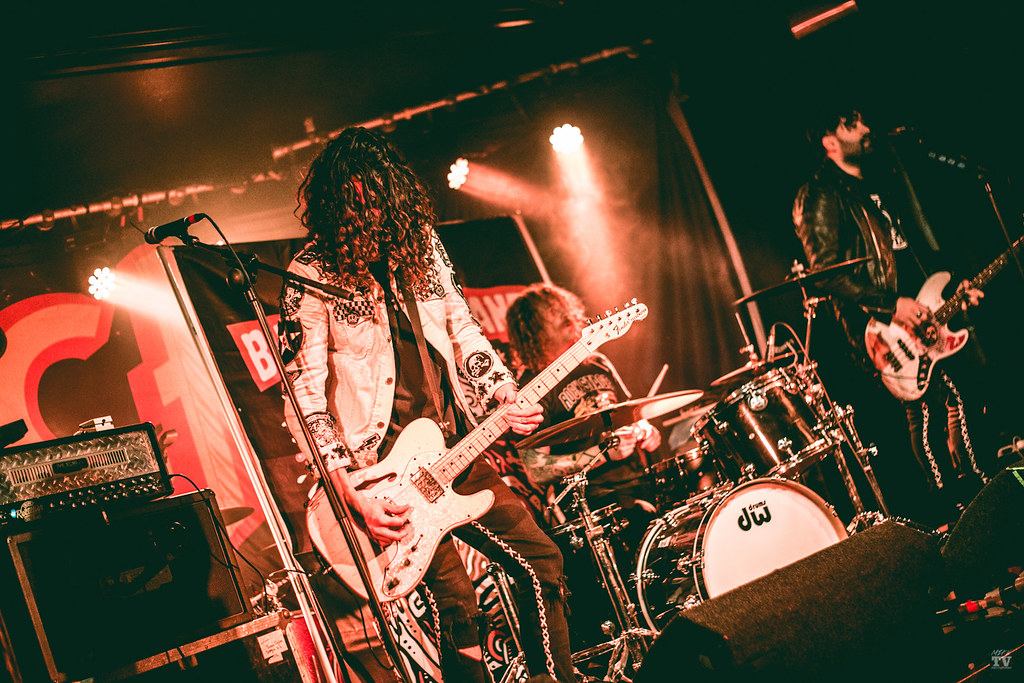 Without further ado, Sumo Cyco waste no time in taking their place upon the Limelight 2 stage. Suddenly appearing before the now healthy-in-numbers crowd are three immediately likeable musicians. A quick note to the lighting engineer of the venue rings across the PA by one member: “Hey – we like to be lit up, we’re pretty people.” To a flood of pink beams to the stage illuminating the one and only Skye ‘Sever’ Sweetnam, the Toronto-based band’s front woman. 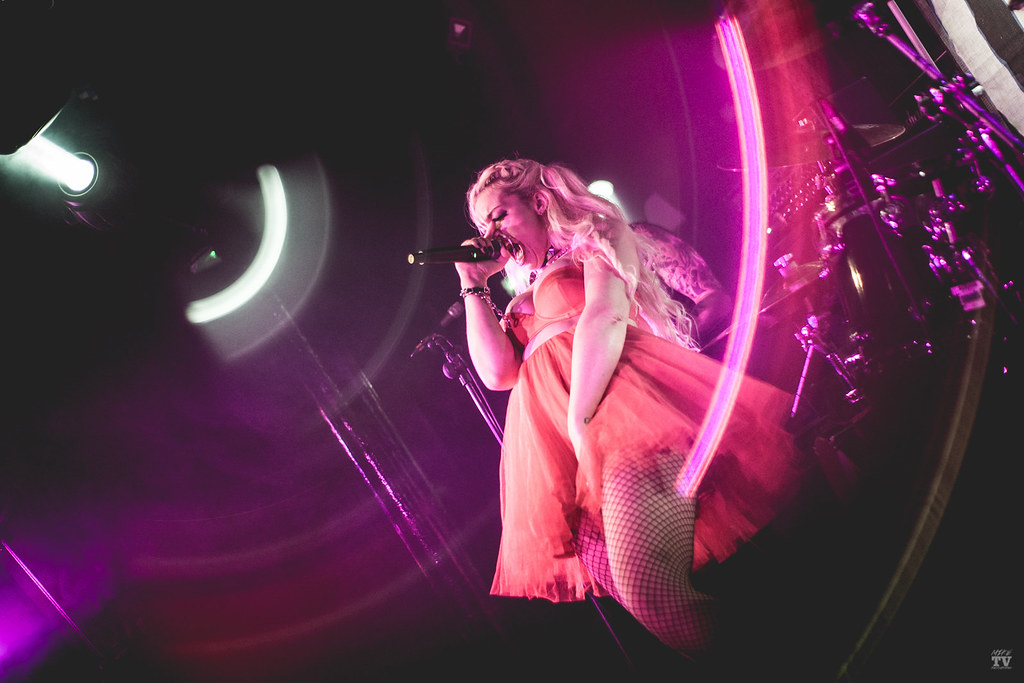 Unafraid of indulging in the delights of the zanier side of rap metal, Sumo Cyco burst into a flurry of contorted faces, staccato riffing and bruising sub bass drops. In an absolute surprise move the audience is treated to a note-perfect cover of System of a Down’s BYOB with a Cyco-tic twist as their fourth song, at which point no one in the room can resist the urge to raise their voices to sing along. While it would be fair to align a SOAD tune as the most fitting of covers for Sumo Cyco, the true spectrum of Sumo Cyco’s energy, enthusiasm and extravagance would be better described in a hypothetical image of Andrew WK sliding his way down a Helter Skelter in hi-vis get-up with a boom box and strobe light in hand.

As the singer of a party band in its truest form, Sweetnam is simply a brilliant show woman, making the stage (and extended venue space) her home for the best part of an hour, clearly used to having an audience in the palm of her hand. Pausing at the end of a lengthy headbang, Sweetnam peers up, hunched over with a fluttering eyes and a devious smile to implore: “Belfast…can you make some noise for me, please?” She stares out devilishly angelic before launching into “Undefeated”. 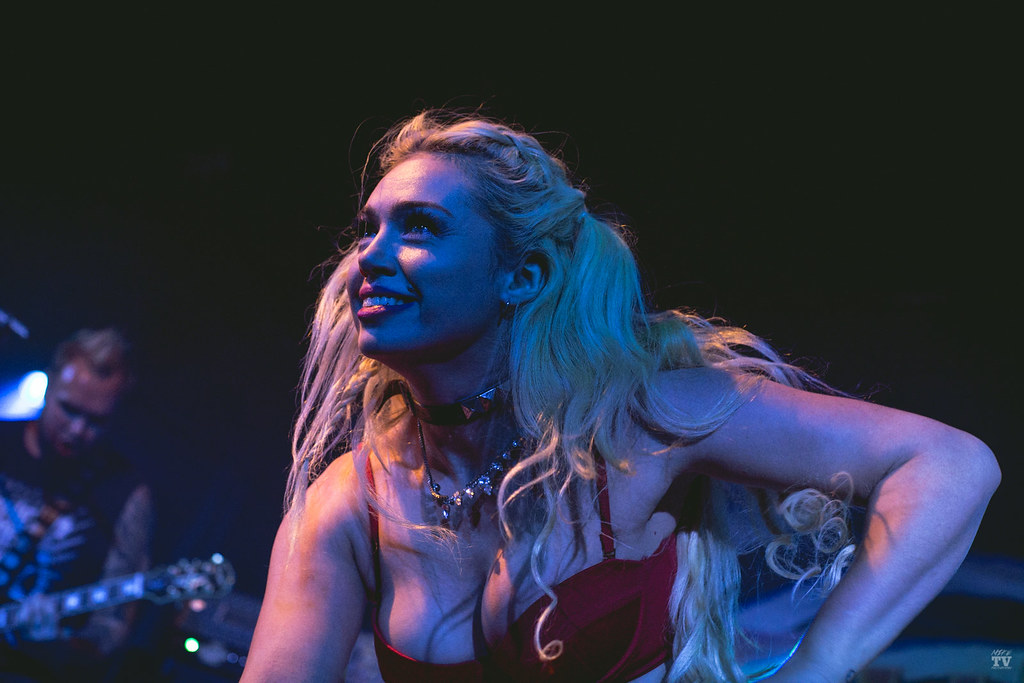 This ripping track features a mind-boggling bass solo relief, the likes of which are demonstrated perhaps only by fellow Ontarian Geddy Lee—an arpeggiated chain of notes played at speed by some incredibly nimble fingers then seguing into a lounge-like reggae outro to a sure fire hit tune. Nimble is a quality shared across the Sumo Cyco unit, as Sweetnam balances herself on and over the barriers containing the rabid crowd. Venturing to an elevated section of the floor, she postures herself to face off against the band onstage, a gauntlet of movement and noise erupting against one another.

After a jaunt across the bar top evocative of Coyote Ugly, Sweetnam hitches a ride back to the stage on the shoulders of an audience member. Upon reunion the Sumos deliver back-to-back weighty punches with “Broadcasters”, “Free Yourself” and “Fighter”, all compounding a reggae like groove with earthquake-inducing drum and bass lines. 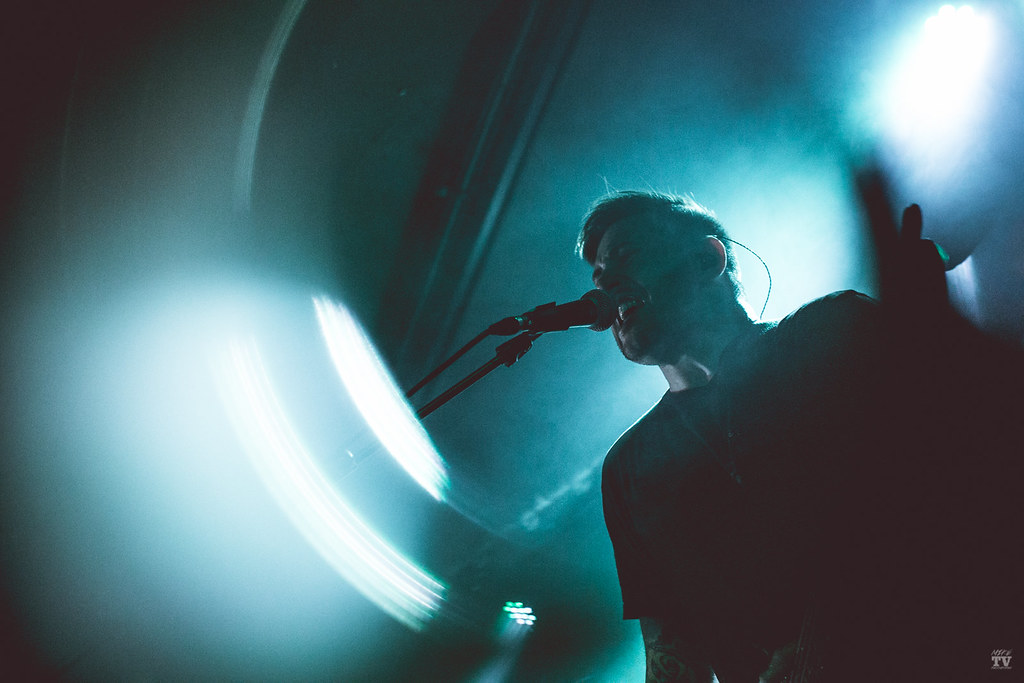 Tonight’s set from cKy draws heavily from the band’s 2002 album Infiltrate.Destroy.Rebuild, which is by no means an indication of some 16 year anniversary of the landmark album, but a testament of its staying power and unrivalled quality.

With the exception of a lengthy absence from the touring circuit from 2012-2017, year after year venues fill out to hear these songs. Tireless, exceptional and utterly exciting are but some words one could use to describe the material from this record, but ones that may also apply to the three gentlemen standing before us tonight.

This is the first date of the final leg of shows before returning to the studio to record the follow up to the band’s 2017 come-back album The Phoenix. Chad I Ginsburg, joined onstage by bassist Matt Deis & Jess Margera are clearly invigorated to be kicking off their tour in Belfast. And excited to be back playing full stop. 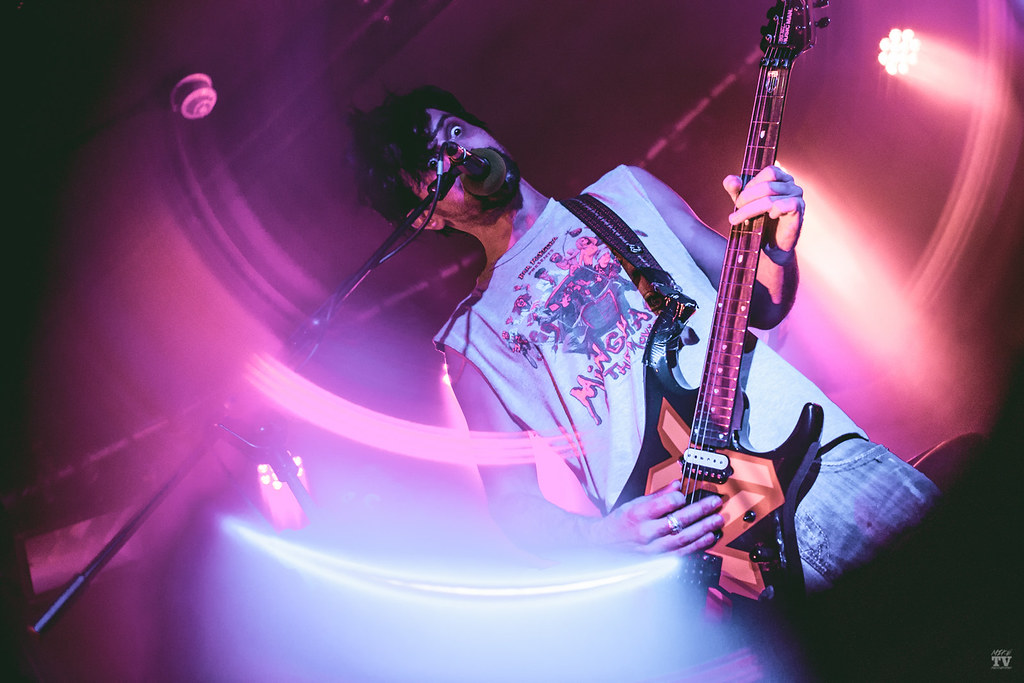 cKy’s recent history is perhaps legend by now, but it is evident that these three seriously enjoy each others company and the music they produce. Undeniable perhaps, when faced with the response received universally at every cKy show.

Trademarked with continuous and deafening “cky cKy cKy” crowd chanting at every moment of quiet throughout their set, the band deliver an equal whack, notably utilizing Ginsburg’s utterly deranged, mechanistic harmonized guitar tone, bringing us down a particularly trippy vortex during the solo section of “Shock & Terror”. The mind boggles at quite how a three-piece can produce such noise, but of course you would only need to look beyond the enormous purple, Bonham-esque Ludwig kit to find absolute workhorse of a drummer Margera decimating the skins, whilst appearing to be a man really quite at ease. 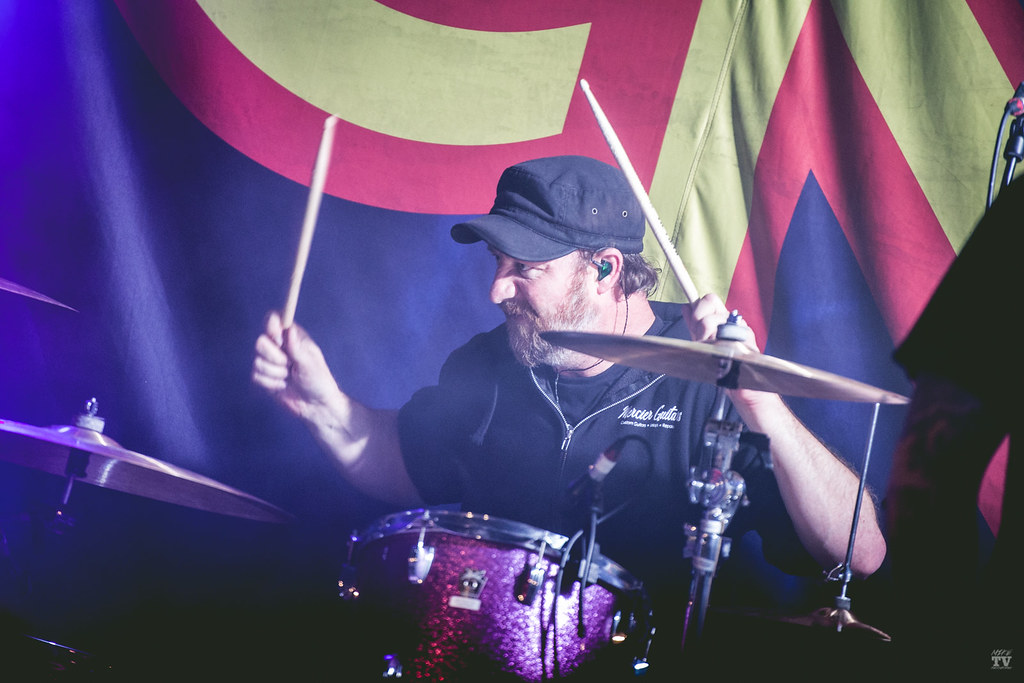 Later into the set are some examples of the group’s latest, sans-Miller content, which do at times very much fit the cKy bill. Certainly the solo in “Replaceable” sums up the cKy sound to a T, but bear a contrast to their alt-metal back catalogue. With pointed lyrics taking aim, it’s not soon until the set is drawing to a close.

After an impromptu yet hilarious inter-band discussion on “Who is cKy?”, culminating in a suggestion of “You know, they do THAT song… Duh duh duh, daaah”, the guys tear into “96 Quite Bitter Beings”. The set closes on a real highlight with the familiar pinch-harmonic-laced tune, the usual show opener…