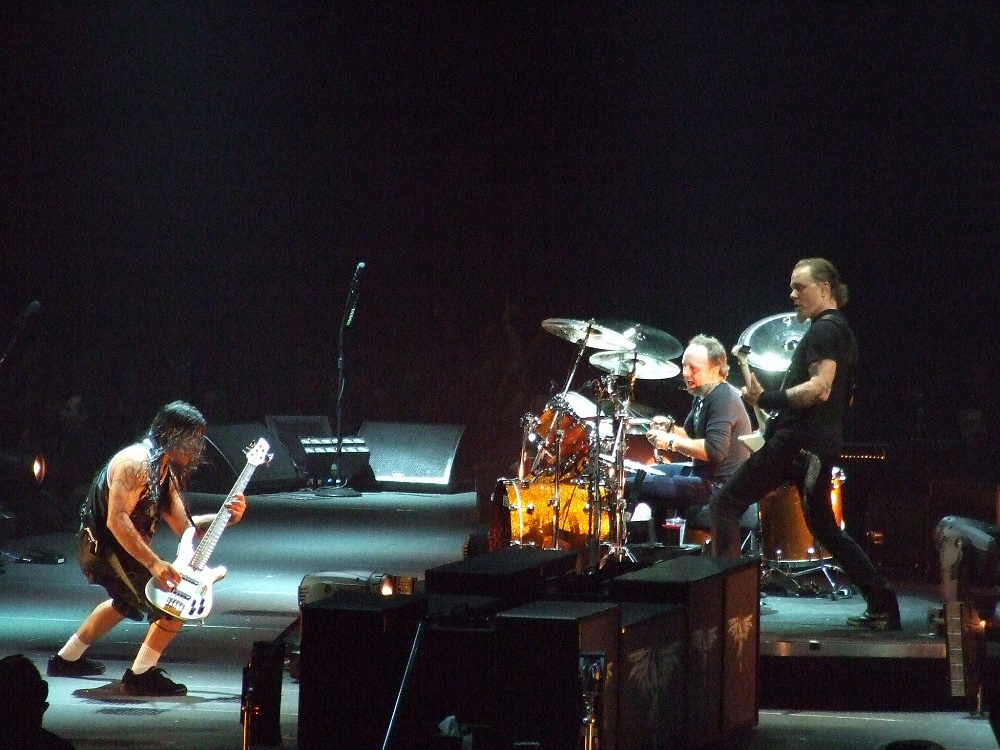 The night was kicked off with thousands of anxious fans ploughing their way through the doors and attacking the merchandise booths. The chaos at the booths was overwhelming for most and they turned away quickly. After attaining my venue specific Metallica t-shirt and meeting up with my entourage, we made our way to our seats. We were located in row 10 of section 121, and with the concert in the round format these were pretty decent seats. The stage set up looked underwhelming while the opener The Sword, was plugging away with their vintage, heavy sabbath-esque sound and keeping the floor crowd mildly entertained. This first opener was overlooked by the metal mass but have an amazingly refreshing sound to them. This is the second wave, the revival of heavier vintage rock, we are seeing it more and more with new bands. I am sure we will here more of The Sword in the years to come, great opening act.

After a brief interlude, Lamb Of God took the stage with their heavy thrash metal sound. The lead singer spewing forth his aggressive rasp and screaming unrecognizable words into his wireless mic. The stage presence and showmanship was exactly what you would expect from this genre of band. With lots of jumping around on stage and flinging of their long rock hair, this band was their to rock. The in your face attitude of the band really played through, and they made every song hit hard, and slap you right in the face. I thought they struggled a little to make use of the concert in the round setup, running back and forth from side to side, wasting lots of energy. Mostly this came from the lead singer, as the lead guitarist played intensely to the crowd, and managed to find choice pockets on the stage to give his fans great visuals. This band would be a great one to see in a smaller venue, or outdoors, the arena was a little much and drained out some of the emotion in their sound.

Finally, after our patience was about to wear thin, the lights dimmed and the legends ran down the ushered path to take their thrown. The stage came to life with an intense laser show, which lead into That Was Just Your Life which sounded average. I mean the sound quality of an in-the-round setup is made for pure rocking, but this starting song had heavy drums and deep base but no kick. By the end this song was just buried in the pure awe of seeing Metallica, I was a little star struck, which is strange for me. They followed this with The End Of The Line, which by far had more punch, they cranked the treble and let James’ voice growl through. The continuation of the lasers, and a few fire balls blasting up from the center of the stage made this song jump in your face.

The lights then dimmed and the crowd was ignited, and the next course of the meal was For Whom The Bell Tolls. The lights above the center stage began to lower themselves down, and the crowd grew louder. The metal pieces the lights were mounted too rolled around to reveal they were giant coffins, probably about 50 feet in length. Over the course of the next 2 songs the coffins pivoted up and down, and changed the angle of the lights. Ride The Lightning was the follow-up song and continued the onslaught of musical mayhem. The floor started to get more aggressive and the fans were moshing feverishly to these rock gods.

With the power of rock pumping through the crowd, and people starting to get rowdy, the tone jumped down a peg. The lights went dim once again, and giant balls of fire began ejecting from the stage. A soundtrack of helicopters flying overhead blanketed the stadium, and the band broke into One. This song really showed the years of these againg rockers. While the vocals were clearly emotional and powerful, the guitar and drum solos were lacking severely. One employs one of the greatest drum solos from this bands era, and they skipped it over and replaced it with a basic heavy hitting beat mixed with a mini jam session. The historical guitar solo from this song was thumbled through and brought this song to shame. With a killer ending, this song was no where near the level it should be at. Maybe the band is too old to rock that fast or was too tired to nail it that night, but they sure did dumb down a brilliant masterpiece.

Now on to the heavier songs; Broken, Beat and Scarred, Cyanide and Sad But True were the three beasts to follow. The power and rawness of the first two was intense, the crowd ate them up, but were bidding their time for classics. Although it will take some time for the new jams to sink in, they were more popular than you would expect, with many fans chanting along. Sad But True, was a great change of pace and brought out some of that nostalgic sound the elders in the mass were there to hear. The stage show continued with the coffin-like apparatuses pivoting back and forth and up and down, with a sprinkle of laser and fire to mesmerize the crowd. It worked brilliantly, the fans were in awe.

Over the course of the last 7 songs leading into the encore, things were heated. The mass of metalians raged through and were jumping to every beat. Fists were pumping hard in the air and devil horns were prevalent across the sea of banging heads. When slower songs began, the crowd actually had lighters, not the typical ocean of cell phone screens you see nowadays, but a plethora of lighters, like it was 1985. The last seven were Wherever I May Roam, No Remorse, The Day That Never Comes, Master Of Puppets, Battery, Nothing Else Matters and Enter Sandman. With most songs hitting the Black album or newer, the set list dies out a little. Master of Puppets has to be the song that had the minions moshing most of all. The sound quality was top notch, but again the instruments were faded and weak at time. James’ voice cracked on more than a dozen occasion through the set, but they soldiered on and brought the people what they wanted.

For the first time in their tour thus far, they carried a new song into the starting of the encore, and this was Am I Evil?. It was spectacular to hear this Diamond Head cover uttered from the metal masters. The crowd sang every word and made this one of the highlights of the night. To follow this up was the Queen cover of Stone Cold Crazy, which was amazing to see them hitting fast and hard once again. The encore was like a different band, they were hot-tempered and aggressive, this made for a wicked closing to this aging show. Finally the last song of the night, the lights came up and a pile of black beach balls fell from the ceiling. Each one sporting the bands logo in white on it, the final song, Seek And Destroy, powered out the ending of this mega act. The crowd was bouncing those black beach balls around like it was timed or choreographed to the song. It was intense and made for a wicked spectacle, fans started fighting over the balls. A few people were attacked, which I witnessed with my own eyes, and I am sure this want the only show this happened at. You can’t drop something that big into a crowd of metallers and expect no one to go unscathed.

The song ended and the lights fully lit up, and the band actually stayed at the stage. They threw hand fulls upon hand fulls of pics and drumsticks into the crowd. Each band member took their turn at the mic and thanked the crowd in their own way. Then finally the superstars were ushered off stage and the crowd slowly dispersed. This was a great first Metallica experience, but I noticed a lot more flaws then I had hoped. For the money, this was worth the coin, I would suggest it to any new concert go-er. If you are an old concert vet and have seen them before this was more than likely an average arrangement and you would be a little let down on the setlist, and the vocal and instrumental performance of this ageing crew. All in all I give this concert seven out of 10 devil horns up.