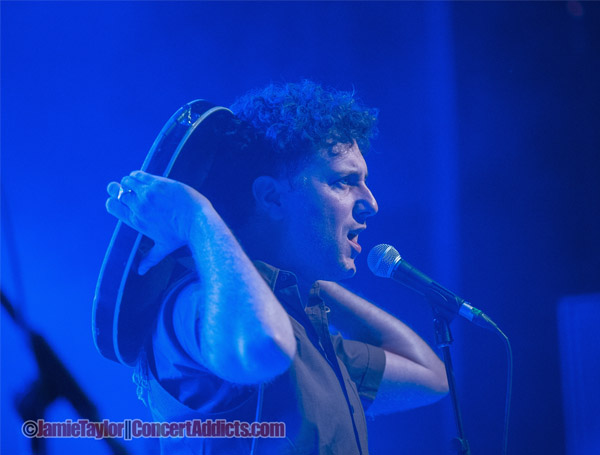 For what was bound to be a night of incredible music, the Commodore Ballroom was pretty damn empty when we arrived. The sides of the room were taken up, but the whole main floor was empty as Eric, Chris, and I made our way inside. I’d bought a ticket to see Constantines with The Weakerthans in 2009 but wound up forgetting about it as I went to Kelowna for my reading break. The ticket didn’t cost that much but it turned out to be a much bigger loss in experience as the band broke up. It was something I was always a little devastated about since Tournament Of Hearts and Kensington Heights had been favourite albums of mine at one point or another.

But I got that chance back this past Wednesday, and as an added bonus, Vancouver’s amazing indie rockers Ladyhawk would be opening. There was no way in hell that I would miss this.

Things got off to a start with one of my favourite songs ‘I Don’t Always Know What You’re Saying’ from Shots. The eerie echo-y synth-y sound of the intro mixed with the simple crash of cymbals is enough to get anyone’s blood going. The band launched right into ‘Came In Brave’, from the self-titled album, before playing the title track from No Can Do. No Can Do is a short but sweet album; each song seems to hit its mark without feeling too short or drawn out. So when ‘I’m A Witch’, something that I didn’t catch, ‘Bedbugs’ and ‘Footprints’, with its excellent build-up intro, came together so easily after, it wasn’t too surprising.

More Shots with ‘Night You’re Beautiful’ (which I never properly appreciated), ‘Fear’ (which I always properly appreciated), and ‘You Ran’ (which I’m hopefully properly naming). ‘My Old Jacknife’ (Ladyhawk) is a set standard and was clearly loved by the crowd, though drummer tried to fit too much of a fill in at one point which I thought derailed the song quite a bit for a split second before everyone got things back on track. Two more No Can Do songs, ‘Window Pane’ and ‘You Read My Mind’ are perfect examples of Ladyhawk being able to fit so much energy and good sound in a small amount of time without it feeling too short. Amazingly, the band still had time to fit in two more songs to round out to a 15 song set with ‘The Dugout’, my favourite song from Ladyhawk, and S.T.H.D. which I thought we’d miss out before “back to your city boy,” came in and let us know everything was going to be okay.

I hate to keep putting so much emphasis on the not-much-time-but-lots-of-stuff deal that Ladyhawk has going on but in 45 minutes they played a 15 song set that covered all of my favourite songs. There aren’t many bands that can pull that off, so Ladyhawk absolutely gets my recommendation, every time.

To continue the night with more amazing Canadian music, Ontario’s Constantines were set to play and blow our minds for their reunion in support of the 11th anniversary of Shine A Light. For this tour, original members Bryan Webb (vocals/guitar), Steve Lambke (guitars/keyboards/vocals), Dallas Wehrle (bass/backing vocals) and Doug MacGregor (drums) were on stage with Will Kidman who had been around since 2003 for the band’s second album Shine A Light. So basically you had all the essential parts of the band together and they started the set off right with ‘Draw Us Lines’ (Tournament Of Hearts), which had a strobe light disorienting you in all the right ways, ‘Nighttime Anytime (It’s Alright)’ (Shine A Light), which had a build-up that had people stomping and clapping along with the disco beat, and ‘Young Offenders’ (Constantines) that had an excellent break-down that got the crowd really feeling the beat.

‘Hotline Operator’ (Tournament Of Hearts) has a line, “you’re a way, an unchainer; you’re a hotline, operator” (which seems wrong to me but I can’t find anything to prove otherwise), that Webb just screams out and as he did it he flashed a smile to the crowd that let off that he was real happy to be back on stage doing his thing. ‘Soon Enough’ started too soon as Webb’s guitar got cut off somehow as he let out an “oh shit,” but things quickly fell back into place as the band continued through ‘Soon Enough’ (another favourite from Tournament Of Hearts) which was followed by ‘Shower Of Stones’ (the first of only a few songs from Kensington Heights).

‘Shine A Light’ is a very unique sounding song, even among Constantines’ other amazing tracks. The crowd was amped up after that but ‘Insectivora’, ‘Young Lions’, ‘On To You’, and ‘Scoundrel Babes’ are all strong songs from Shine A Light and they kept the energy up and the crowd happy. ‘Scoundrel Babes’ had Lambke taking over vocals which was an interesting switch but the song suffered a bit from some awkward fills in a couple places. This didn’t affect the crowd in the least though; they were still eating it up without any sign of stopping.

‘I Will Not Sing A Hateful Song’ is a vocally strong song from Kensington Heights and ‘Hard Feelings’ (from the same album) is full of some amazing keys that make it one of my favourites. ‘Time Can Be Overcome’ is another from Kensington Heights but after ‘Hard Feelings’ it’s just a bit draining. Thankfully ‘Tank Commander (Hung Up In A Warehouse Town)’ (Shine A Light), one of my favourite songs, was there to bring the speed back up for ‘Arizona’ (Constantines) to finish off the set.

We were treated to a four song encore of ‘Sub-Domestic’ (Shine A Light), ‘Lizavita’ (Tournament Of Hearts), and ‘Hyacinth Blues’ (Constantines) which ran so cleanly into a cover of Lou Reed’s ‘Temporary Thing’ that I almost didn’t catch it.

I didn’t get to hear everything that I wanted to from Constantines and I felt like the first half or so of their set was really strong and the second half was just sort of all over the place as for what I thought they’d be playing that night but other than that and a couple bumps in the road, I really couldn’t have asked for more. Constantines were everything that I wanted them to be and I finally got the chance to make up for the concert I missed.

You may only be able to hear Constantines from a recording now as their last concert (possibly ever) is October 11th in Calgary but the albums still stand up and are great for a listen; most likely multiple listens. Constantines and Ladyhawk are both amazing bands and having both in one night was well worth the price of the ticket. If Constantines continue to be around and are touring, don’t miss them again.