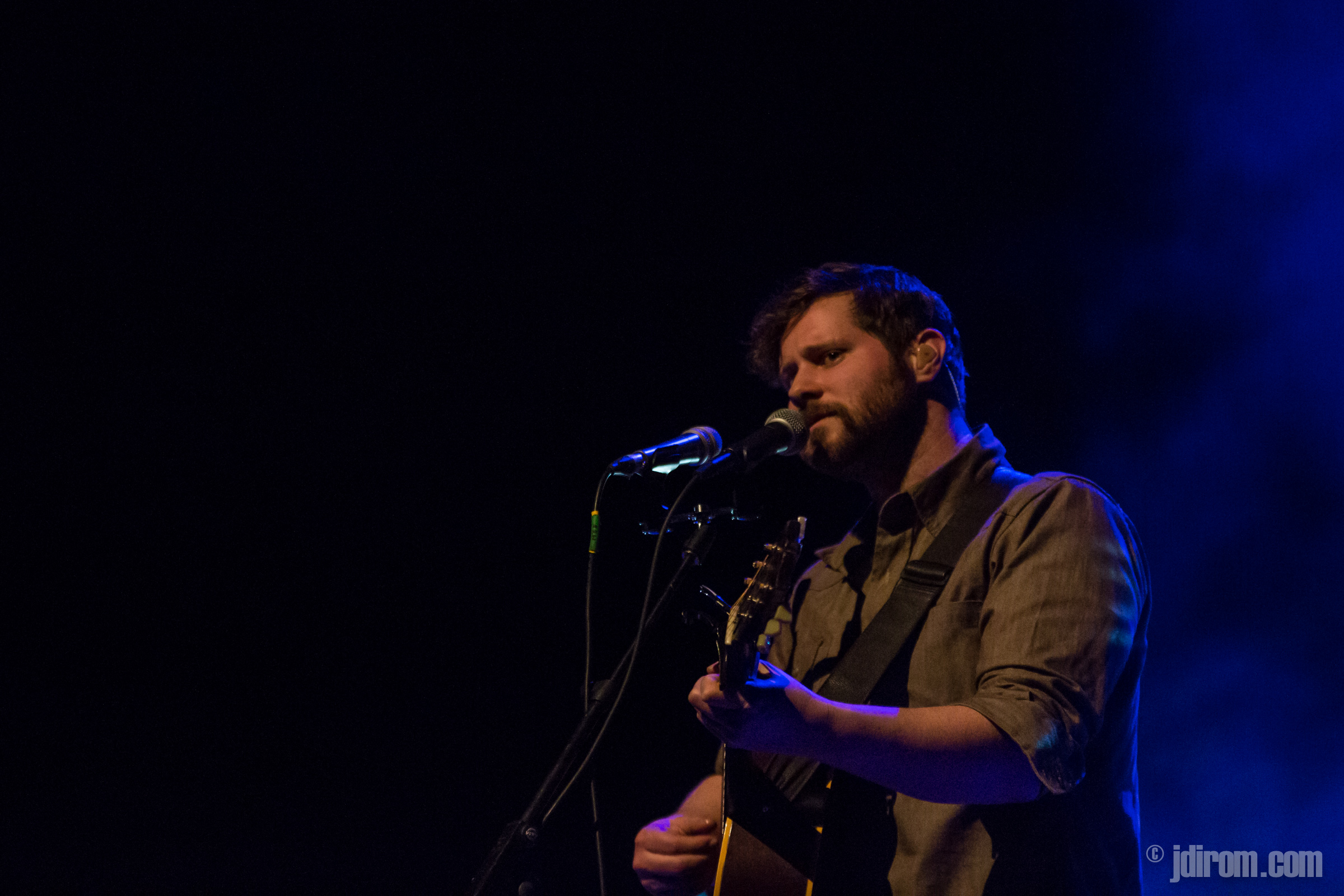 I’m real happy that I know Dan Mangan exists.  Nice, Nice, Very Nice is an album that’s in constant rotation in my playlist and one of those special albums where you just love every song and can be in the mood to listen to it anytime.  I kept missing him perform, over and over, and when I saw that he was going to be at the Vogue Theater, I knew this had to be the time.  I hadn’t yet listened to the new album, so I’ll say right now: I underestimated how much Dan Mangan + Blacksmith was going to be Dan Mangan + Blacksmith.

Unfortunately I missed almost all of Astral Swans and only caught the end, which was a good thing because Hayden didn’t take long at all to start things up after Matthew Swann left the stage.  The four-piece played a nine song set, with members swapping instruments in amongst a primarily slow, rolling sound with harmonies mixed in.  The band seemed to be a bunch of funny, carefree guys, with Paul Hayden Desser being the gruff ring-leader.  He had a fairly self-deprecating sense of humour (which I always love) and some laughs were had, especially when bassist Jay McCarrol got an earful of trumpet from Blacksmith member JP Carter.  The sound was good but just didn’t really click with me.  I can’t say that I could point out any parts I took issue with but at the same time, just wasn’t a fan.  All-in-all, a worthwhile set but nothing I (personally) would write home about.

Dan Mangan + Blacksmith’s set was something else entirely.  Everyone that Mangan’s recruited for his little super-group is just excellent at their respective instruments; Gordon Grdina (guitar) and Kenton Loewen (drums) were exceptionally amazing that night but props to John Walsh (bass), Tyson Naylor (keys), and JP Carter (trumpet) all just made an amazing thing even better.

Like I always seem to say, I hadn’t yet heard the new album.  Club Meds is not really what I would’ve expected from Mangan; it’s much darker/heavier, and definitely more electronic sounding than the preceding albums (at least what I’d heard live).  ‘Offred’ is a pretty perfect example of that which had the smoke flowing in the room to appropriately provide a visual that matched the slow, dark tone of the song.  I loved the light show through-out the show, except for the parts where I was pretty consistently blinded by one stage light during this song and one or two others.  The light seemed to move on once ‘Vessel’ started and I greatly appreciated it.  ‘Vessel’ was very different and stuck out kind of like a sore Animal Collective-esque thumb.  Not a bad thing by any means but the instrumentals were not at all what I would’ve expected.

They took a break from the new album to play a couple from Oh Fortune, the first being ‘Starts With Them, Ends With Us’.  This is definitely where I took an immediate liking to Loewen on drums.  They changed up the sound a bit and the song was a lot “weightier” than usual.  I don’t want to say heavy because it wasn’t like that; the mood of the song just felt a lot heavier on your soul.  ‘Leaves, Trees, Forest’ however, remained a light, airy song that had guitar that brought me back to when I saw The Walkmen play.  Grdina’s magic fingers moving up and down the neck of his guitar is just magic.

But that was nothing compared to ‘Post-War Blues’.  I wish there was a quality video for the performance of that song that night.  Loewen laid waste to his drumkit with a solo before they burst into the song, it was insane.  He, nothing short of, killed it that whole night and ‘Post-War Blues’ was the prime example of his skill.  Loewen wasn’t alone though, as Grdina shredded away on guitar each time the chorus hit without losing a beat.  I love it, I was blown away; the show could’ve ended there and I would’ve been a bit miffed from the length but really wouldn’t be able to argue with that performance.

Thankfully though, we had tons of time left.  ‘Road Regrets’ from Nice, Nice, Very Nice is easily one of my favourite songs and covers a journey to the SXSW music festival in Texas.  There was a nice pause early on in the song, right before Mangan growls out “Them’s the breaks” that got the room hushed before blasting back into the song.

Then came an onslaught of songs from Club Meds: ‘Pretty Good Joke’ (with its interesting distorted trumpet intro, made to sound like a being-tuned-radio, care of JP Carter); ‘Forgetery’; ‘A Doll’s House/Pavlovia’ (which Mangan put his guitar down to just sing); and ‘Mouthpiece’.  As Mangan put it in a sweetly sarcastic voice, “We just worked so darn hard on it (Club Meds).”  ‘Rows Of Houses’ (Oh Fortune) got the most cheering of the night and had the band jamming it out as Mangan left the stage to let them do their thing as we got some seizure time in, thanks to the lights.  ‘Kitsch’ and ‘New Skies’ were the last two songs from the new album, and ‘New Skies’ ended the set perfectly.  It was another dark, haunting song that sounded like it fit well in the new album and was a perfect example of one of those songs you can close a set with and leave the audience with the right ending feeling.

But it wasn’t over and as an encore, Mangan came out on his own and played my absolute favourite song of his, Nice, Nice, Very Nice’s ‘Basket’.  That song just fills me with emotion as it builds up near the end of the song; gives me goosebumps every time.  That effect was only magnified as Mangan stood up on stage, acoustic guitar in hand, with power building up in his raspy voice as he struck the strings of the guitar harder and louder.  It was strong and beautiful and was all that I needed; I could actually leave now and be happy.

Since they were home though, an extended encore was needed and Mangan asked the audience for what they needed to be sated.  Naturally, every song was from Nice, Nice, Very Nice.

First up was ‘Fair Verona’, followed by the ever-popular ‘Robots’, and finally, ‘Sold’.  Mangan got even more admiration from me as he pulled out a Simpsons joke when someone yelled for him to play ‘Basket’ again before he got the Astral Swans and Hayden out to join in on singing ‘Robots’.  Grdina’s young daughter even managed to stay awake so she could join them on stage to sing along, which apparently was the first time she managed to do so on the tour.  ‘Sold’ had more sing-alongs and bonus solos from Carter, Naylor, and Grdina.

The encore ended, and the band took a bow and I was left wildly impressed with the performance.  There really wasn’t much more I could’ve asked for.  The opener was fine, and Dan Mangan + Blacksmith was out of this world.  I hope that everyone who went the second night enjoyed themselves as much as I did.  If you ever have a chance to see the band, just go; I can’t see anyone ever being disappointed.