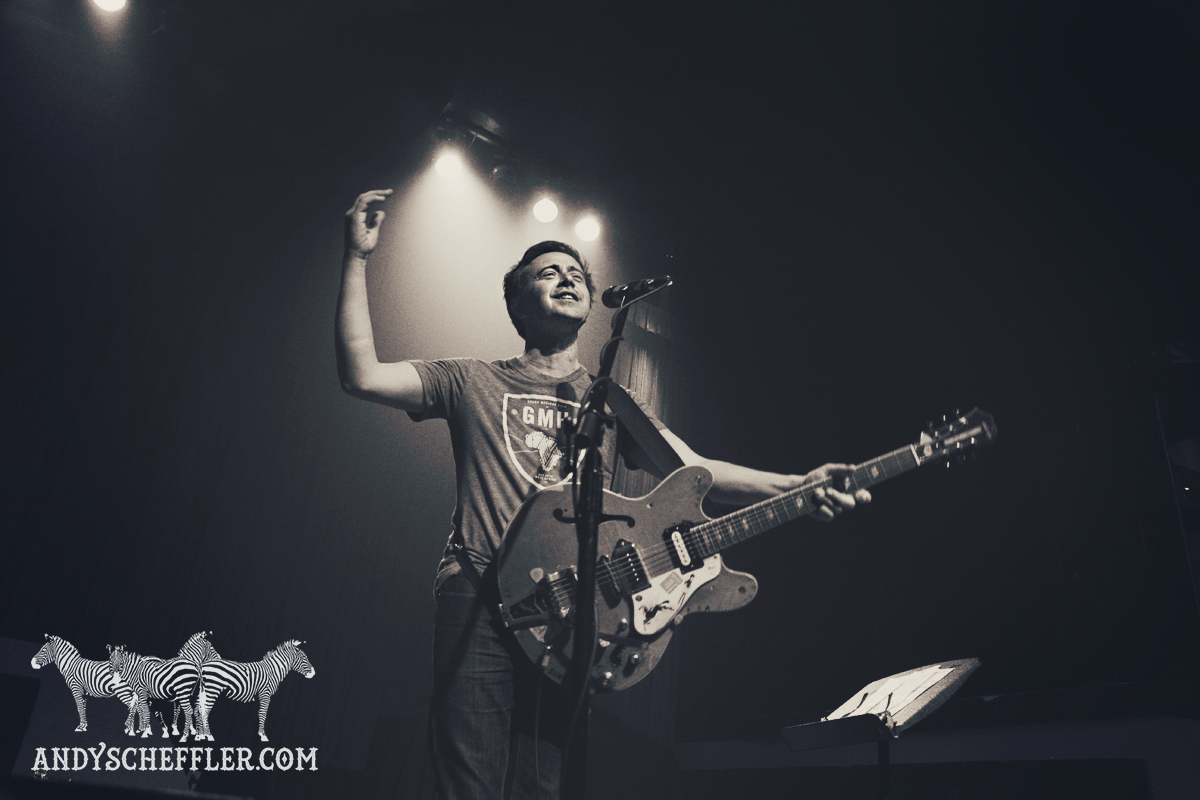 What a treat this show was! My first encounter with Danny Michel was almost exactly 11 years ago, when he politely called me from his tour van while he was rushing in horrendous traffic to meet me in the now-non-existent Richard’s club for an early evening interview. He was engaging then, and since, has become associated with all sorts of interesting things, like recording and touring with international bands, releasing a David Bowie covers album, living in the woods with a room full of slot car racers, befriending astronauts, helping get kids through school, and now, touring in a Star Trek space van and combining the tour with a multimedia project of music and art filmed in said van. He just can’t do things normally. How dull would that be anyhow? You never quite know what he’ll be up to next, but most importantly, he is clearly always having a total blast with what’s he’s doing, and as he alluded to later in the set, always living for right now.

Initially, I showed up 2/3 of the way through Danny Michel’s first set (The show was billed as “Danny Michel & Guests” but the guests turned out to be…. another Danny Michel set!), and was sort of asked to only shoot discreetly for this set if possible, maybe from the balcony level of the Fox Cabaret. That was fine with me – I think the vantage point from up there would have been lovely. This was, however, my first time in the former adult theatre (…ever, thank you, not just since its conversion into a multi-event space), and after locating and climbing up the balcony stairs, I nearly yanked my arm off while trying to pull open the locked door. So, I lost another bit of song and part of a story doing all that and walking back downstairs into the narrow and densely-packed room (of very tall people, I might add) to Danny Michel standing solo on the stage, talking about Italian ISS astronaut and fellow Star Trek fan Samantha Cristoforetti, before singing a tune about Samantha, in the sky, with diamonds. This was not the last spacey reference on the night, though most of the others I, first off, probably missed, and second of all, were more related to the aforementioned Star Trek by way of his recently-purchased tour namesake Space Van. If you haven’t seen this thing, get over to the Dan’s Space Van Facebook page or his Instagram or something and catch up, because it’s so wonderfully ridiculous a tour concept, no one but Michel and his mold-splitting mentality could actually pull it off and get away with it. Did I mention he might be part of a Spock’s birthday parade in Vulcan, Alberta?

In a nutshell, a guy in Vancouver was selling this super oldschool van covered in over-the-top airbrushed Star Trek imagery and filled with velvety red interior upholstery, and Michel saw it, bid, bought it, and constructed a tour around it that would include special guests performing music in the mini ‘stage’ in the back of the van, and the van being parked out front of the venues for people to ogle and hopefully draw them in to the shows. Unfortunately, Vancouver’s nutty street parking regulations meant the van was nowhere nearby tonight, otherwise rest assured, I would have done a bonafide photo shoot with that masterpiece. The Vancouver date was just the second on the tour, and shortly after the set, I learned, to a series of incredulous giggles by Michel as he was relaying this info, that the van already needed to be brought into the shop for some repairs. The adventure begins!

He also sang us a song he wrote in Belize called “Wish Willy,” about his tropical bar adventures. In a few spots, the song references a bar called the Island Queen. He actually stopped the song halfway through to tell us the story behind the song, how he and his ex used to go there to drink because it was off the ‘main strip,’ a bit of an out-of-the-way, more locals kind of place that probably could use a bit of extra patronage. Some time later, when Michel was performing the song for students of Ocean Academy (the school that he supports, teaches music at sometimes, and helps fund students to attend), they asked him why he was singing about the whorehouse. “Ah,” they thought,” This makes soooo much sense.” He claims when drinking at the Island Queen, they were always asking him if he wanted anything else… anything else at all… and he’d usually respond with, “Yeah another rum punch please.” He said they were often dressed up there and he just thought it was a fancy place. As Michel tells these tales, he is so absolutely amused by them himself, an impish grin plastered across his face and his eyes crinkled in joy to near invisibility, laughing between words along with the crowd, who are also nearly on the floor with laughter. Knowing giggles now consumed the room whenever Island Queen was mentioned in the lyrics throughout the rest of the tune.

So I pranced around behind the wall of people patiently trying to get a sightline to the stage for those few songs before Michel politely excused himself for a few minutes to recoup before his second set for the night. I took the opportunity, as people thinned out to engage in the requisite inter-set activities of booze acquisition, toilet breaks and cigarettes to weasel up to the foot of the stage, along with a few enthusiastic fans. The room retains its adult-theatre vibe of red lighting, red paint, and a little bit of disarray and a refurbed/rundown look. It’s a nice event space now, and great to have a new room of this size in town after most of the similar rooms downtown have long since been razed for condos. Shortly, Michel showed up at the side of the stage briefly and was pounced upon by a few audience members right away. He chatted happily with everyone and then made his way back onto the stage with a glass of rum and a brown-bagged gift of a homemade mug with a glazed painting of the space van and ‘Stardate 2015’ debossed into it. Michel was performing solo again tonight, a common set-up for him to vastly reduce touring costs. I have seen his full-band sets before and the music really is in a whole different dimension from one to the other so that they are almost incomparable.

Michel’s greatest strength in both his lyrics and his banter is his engaging storytelling. He’s incredibly good-humoured and is one of those guys that, when he’s 80, is going to be parked at a bar in Belize talking the ear off of anyone lucky enough to be sitting beside him. After show-and-telling his new space van mug proudly to us, he quickly arranged his stage space and got into his song “Two Hearts.” He stopped this song partway through as well after the line, got no beepers, no pagers, to remark at how old the song is that he wrote about beepers in it. “Remember those useless things?” The set seemed to go really fast, not because the time he spent on stage was particularly short, but because he really didn’t play all that many songs, with his rambling, hilarious tales taking up the spaces in between. I think the audience would have been just as happy if he’d not sang any songs at all and just chatted all night about his quirky adventures. A few times he asked the crowd if they really wanted him to keep talking, and with a resounding ‘YES!” shouted back at him, would exclaim incredulously how amazing an audience he had before him that were so easygoing and would let him just basically do anything. It’s so true! Part of the time before “What Colour Are You?” was spent talking about a musician in Belize who was supposed to appear on one of his recordings that he was supposed to pick up at the bus station, but he went every day and the guy never was on the bus. He expressed his concern to his friends in town, who continually told him to just relax. One day, he purchased a mood ring out of a vending machine at the station, which somewhat inspired the song. Eventually, the musician showed up, told him that they better get recording because he was a little late, and then it was revealed after the whirlwind recording session, during which this genius musicman was simultaneously hearing the song for the first time and recording his part on it, that he didn’t actually know Michel’s name. Laughter, again. The room was so full of love firing in both directions.

Despite being solo, he manages to fill the room with warmth and sound. His music and lyrics tell such vivid, real stories, you really want to listen closely and be drawn in. The audience was very respectful, listening intently. But, I suppose it can be a bit lonely alone on stage some times, and during one song, Michel actually left room for a bridge, gestured behind him, and said “Take it away boys!” Just after this, when suddenly realizing he hadn’t set up his looping gear before embarking on the song, he quietly cursed, and then blamed his imaginary band for the screwup. He talked a bit more about the space van, Star Trek and space in general, and then admonished himself, claiming even his mother told him he’s never going to get any dates if he talks about such things because girls don’t like stuff like that (well, I beg to differ, ma – a gut-splittingly funny, good-natured, talented songwriter who has a way with words, owns two-plus milk crates full of Bowie LPs, hangs out in a beachy paradise drinking rum and participating in some local philanthropy, takes his nerdy interests to the level of purchasing themed and possibly broken vans for creative tours, and hobnobs with astronauts is actually pretty dreamy). Michel announced a final song, then left the stage.

The room lights dimmed, the audience stamped and hollered for his return, and in a few moments, Michel poked his spiky-haired head above a short wall at the back of the stage to peek out at the crowd. He strolled back to the microphone and said, “Aren’t encores weird?” He informed us his encore song was going to be a new, simple song, and that he wrote a bridge for it but it doesn’t have any words yet, so he just sang through it with a series of “nananaaaas.” Near the end of the song, as the audience joined in for a bit of a singalong, one fellow at the side of the room belted out a lovely harmonious melody that caught Michel’s attention. He halted the tune, singled the guy out of the crowd, hushed everyone else, and resumed the fading chorus along with the newcomer in wonderful harmony. “You just made that a hit,” Michel claimed. With that delightful ending, the show was done, and Michel retreated to the merch table to sign records and chat with fans. The guy who had created the harmony at the set end exchanged some info with Michel afterwards, and voila – a connection was made. We might see a great partnership from those two in the future! It was a lovely night and a great, relaxed show. I think crowd and performer alike had a marvelous time. Be sure to keep up with the Space Van tour – sure to have many more surprises along the way.

Have a gander at the rest of the set photos here.