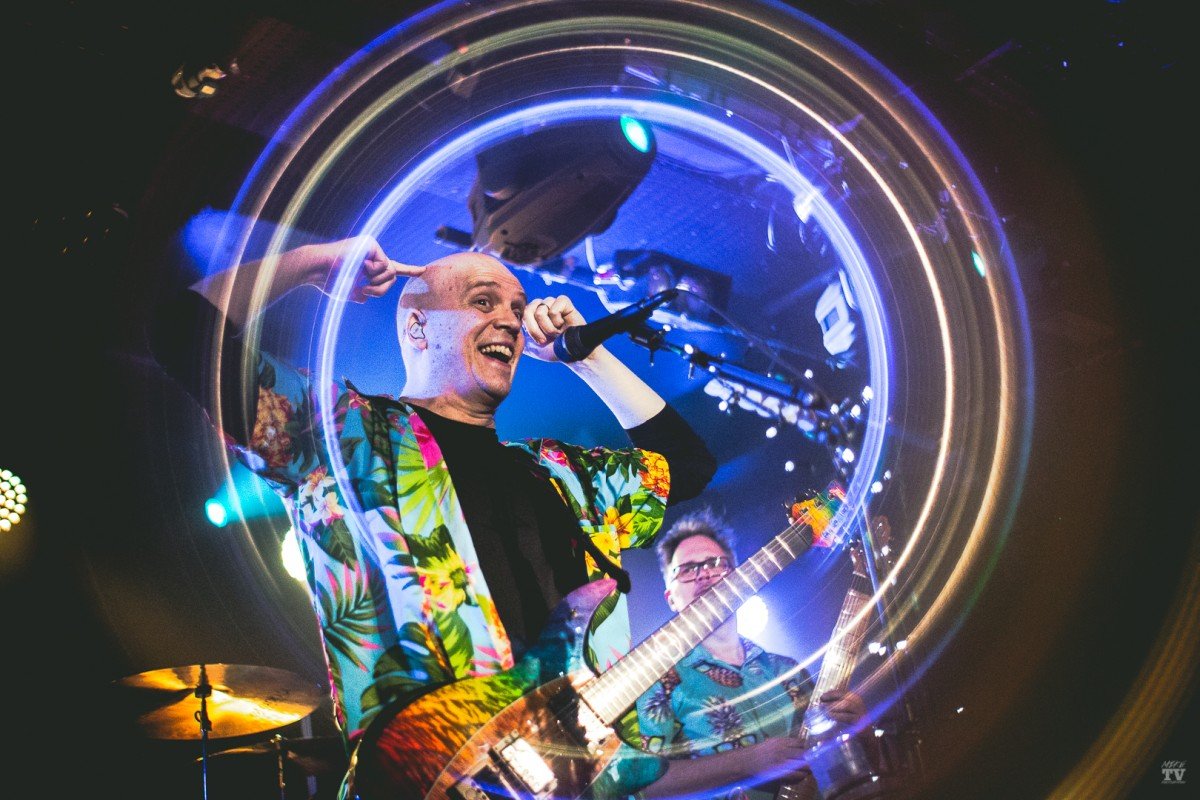 It’s not too often that a gig comes along that sends chills down your spine, extracts a reluctant giggle from your lips, bristles your hair, and gives you the heebie jeebies all in the course of a couple of hours. As fresh meat to this unlikely musical collective with a cult following, I left Devin Townsend’s awry performance at the Limelight in Belfast totally agog.

A musical titan of many genres, featuring on thirty-some-odd albums including eighteen of his own, one never knows what to await next from Townsend, and it seems that’s just how he likes it. On his much-hyped latest album Empath you can expect the unexpected, as the man draws from each and every musical style he has put his hand to over two and a half decades in the industry.

The product is a wild ride of moods and textures, a spiritual journey and a self-proclaimed vacation from the gloomy realities of this age with a bit of fantasy and freewheeling. Not your run-of-the-mill metaller, “Hevy Devy” defies typical hardcore tropes and dares to be silly, light and hopeful, throwing the prog rock mold out the window. His Saturday night performance in Belfast reflected this perfectly, as Devin set the tone meticulously for three distinct acts.

The first act transported the packed house to a tropical island scene with old timey banjo music playing as the band populated the stage one-by-one—clearly not in any hurry—carting last minute set decorations of palm trees wrapped in fairy lights and fixing drinks with with tiny umbrellas to be distributed among the small army of a band.

Each sporting Hawaiian shirts, everyone from multiple guitar and bass players, elaborate drums and keys, to a chorus line of backup singers occupied this “low budget Disneyland”. The man himself appeared last, all smiles, proclaiming that we were now all officially on vacation and setting the goal to get everyone into the best possible mood within the just two songs—not your normal primer for a metal gig!

The group launched into what appeared to be a straightforward reggae rhythm fitting the tropical vibe, but which quickly warped into the unsettlingly dark yet cartoony “Borderlands”. The three girls of the chorus singing comically high with metal chugs and cacophonic sound effects exploding and random air horns blasting in the background, the nightmarish trip pushed it just to the limit before releasing into calming marimba rhythms once more.

The sound transitioned into a soothing astral portrayal of paddling in clear waters or floating in some blissful abyss, Devin crooned in his distinctive cadence, “It’s life…It’s tragic…It’s magic…It’s madness.” With a wide-eyed stare and a manic grin Townsend addressed the crowd like a sort of Mr. Rogers on mushrooms, affirming that we are not going to let any of this bullshit get us down, enticing the enraptured crowd to step into his skillfully crafted bliss. “Everywhere I look I feel happy,” he cried, and hurled himself back into the pounding chorus.

In the wake of this eleven-minute epic, the band treated us to another heavy-hitter off the new album, “Evermore”, continuing this peculiar magic trick of absorbing every ounce of anger out of the kind of screaming vocals that would typically be fuelled by rage. The live iteration was more rounded out that the highly-produced album, especially with the addition of soulful partner vocalist Ché Aimee Dorval. A dynamic surround sound of voices punching out beats and holding harmonic chords paired with machine gun drumming and insane riffing was at once heavenly and demonic.

Townsend excused his improvised practical interpretation in place of the elaborate and what would certainly have been beautiful projections that accompany this set in larger venues. This was particularly missing during the opening of “Sprite”, beginning with the choir telling a fable, preceding a space odyssey of complex time was ethereal and cinematic.

As the resplendent tones went skipping away, the stage cleared leaving Townsend all but alone spinning a cold and lonely soundscape, beckoning the second, darker act of the set. Soon he was accompanied by a skeletonized drummer pounding furiously tribal rhythms to Townsend’s thoughtful guitar. The band returned stripped of their vacation wear and dressed in all black for “Coast”, which ushered in a string of songs from the stylistically disparate Devin Townsend Project with plenty of room for jamming interludes.

The image of Devin’s gaping butt flaps now firmly planted in our minds, the band jumpstarted the crowd with the wall of sound that is “Deadhead”, an epic trudging ballad steeped in strife. I felt like I had been cast far ashore from the island of earlier on and was now sinking into a deep dark pool, longing to be back on the warm sands.

As if in response to my dismay the scene shuffled again for the third and final act. With another costume change to the tune of sprightly strings, vaulting us out into the clouds. Townsend burst back onto the stage in a long black skirt. With a heathy dose of irony, the man goaded the crowd into chanting “death metal” before diving into the grandiose waltzing “Why?” with its regal, operatic flourishes, feeling like this rock gig had shifted into musical theatre.

Keeping things camp, Townsend instructed concert-goers, in his polite-to-a-fault Canadian manner, to “Please give me your fucking jazz hands!” which we were to brandish during the chorus of slinking power-swing earworm “Lucky Animals”. As people in the crowd animated little puppets on their outstretched arms, I couldn’t shake the feeling that Devin had trapped us in his own private rock opera.

As the act winded down, the eccentric genius brought the madness back to a heartfelt core of his latest work, explaining how Empath is all about overcoming depression and finding the goodness and beauty in a disillusioned world—a topic of conversation all too common in gigs of recent years. “Genesis” beamed this message loud and clear, an angelic hymn leading into a pumping banger with funk interludes and surprising passages making up an incredible ride of a song. Stripping it down to just an acoustic guitar and his three-part harmony of Samantha and Anne Preis and Arabella Packford, the set concluded on a tear-jerking unplugged rendition of “Spirits Will Come”, dedicated to those suffering from depression.

Clearly not one to exit on a subtle note, Townsend made a hasty exit from the stage, sarcastically building suspense, only to liven things up a moment later with an encore. Announcing their mere nine remaining minutes, the band catapulted into a grooving cover of Disco Inferno which Devin would incrementally command be sped up until the audience were danced off their feet and it eventually unraveled.

This made way for one final original, the epic “Kingdom”, which administered the final blow to an already mind-obliterating concert. The battery of tight drums and punishing guitar with Townsend’s hauntingly powerful vocals of “I’m fine, stay with me Lord!” would linger in the mind long after the show. Resolutely unique, devoutly passionate, musically intelligent, and off-the-wall kooky, Devin Townsend is not a show you want to miss!