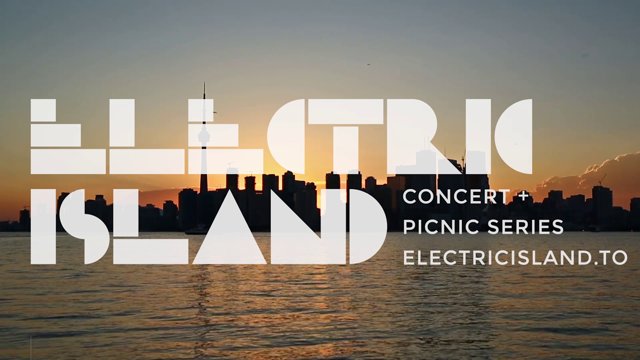 On August 3rd the third instalments of Toronto’s Electric Island festival took place at Hanlan’s point. This is the third year the festival has been running and it appears to be hitting its stride. This week’s event brought some of Tech’s biggest names out to the island. The show included the likes Shiba San, Art Department, Green velvet and many others.

When I arrived on the island I quickly noticed that the atmosphere at the festival was unlike any other electronic festivals in and around the city. The crowd seemed to be a little bit older and a little bit more experienced. The events environment was both serene and relaxed, as many of the festival attendees took to their technicolored blankets and chose to lie in the sun staring into the clouds.

One aspect of the festival that really caught me off guard was the abundance of signature Toronto food trucks that the organizers were able to bring out. It is always appreciated when there is an opportunity to stuff my face with a Caplanskys’ deli poutine while enjoying an afternoon of electronic delight.
As the day went on and Shiba San took the stage, the dancefloor began to come to life. After taking a thorough tour of the grounds, I was surprised by the ample space the crowd seemed to be enjoying as shufflers methodically danced to the ever livening beat. The set came to a climax when he dropped the ever popular “Okay” to a techno hungry crowd.

The next two sets of Robert Babicz and Art Department took the excited islanders through a groovy adventure for the remainder of the afternoon. With the annual electronic music festival, Veld, having been cancelled the day before one could tell that the Torontonian dance enthusiasts were making up for lost time. The music kept a steady pace until the sun began to set. Near the end of Art Department’s performance they began to set the tone and gear the crowd up for the headlining act; Green velvet.

When the clock struck nine the lights on the stage began to fade and a dense fog took over. Suddenly, a dim light beamed down from above to reveal a silhouette sporting a neon green mohawk. The crowd was shivering with anticipation as the bass started to thump. The DJ took to the microphone using what resembled a robot voice modulator, creating eerily melodic touch to the festival grounds. The Green Velvet experience was about to take the audience to the pinnacle of the eagerly awaited long weekend island getaway. The volume seemed to rise with the enthusiasm of the crowd. When the DJ played lazer beams the stage lite up in a barrage of colored lasers.

The day seemed to take a singular fluid feel as time seemed to accelerate on the island. The next thing I knew I was standing back in the ever frustrating ferry line to return back to reality on the mainland. I had always heard of Electric Island but this was my first opportunity to attend, and it truly did not disappoint. The organizers seemed to know exactly who was going to be attending this festival and exactly how to please these people. While standing shoulder to shoulder with sweaty strangers all I could hear were glowing end-of-day reviews and how excited all of these people are to check out Adam Beyer at the fourth and final instalment of the summer.