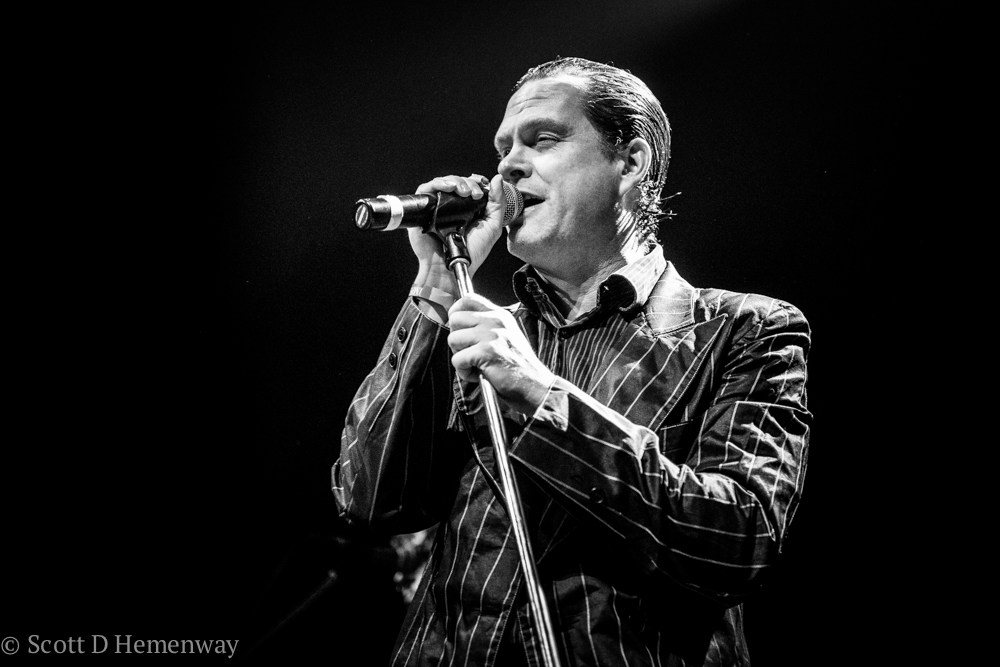 “Electric Six just isn’t cool anymore,” were words that frontman Dick Valentine apparently heard on the streets before the show that night.  The band now has ten albums of material, which is a statement that you could generally use to accurately figure out if a band was cool anymore or not; so let’s see how cool they were.

It was St. Patrick’s day and everyone (some way, way, way more than others) seemed to be appropriately drunk at The Imperial and since it wasn’t my plan to do that myself, I made sure to show up appropriately last minute before the band went on.  Dick Valentine (vocals), Da Ve (Guitar), Johnny Na$hinal (Guitar), Smorgasbord (Bass), Tait Nucleus? (Keyboard/Synthesizer), and Percussion World (Drums) got up and stage, and after Valentine mused about how it was very St. Patrick’s day in the room, what with all the drunk and white people, and they kicked it off with ‘Karate Lips’ from new album Human Zoo.  Though, when I say kick, there wasn’t a whole lot of kick to it, nor was there much to ‘After Hours’ (Zodiac; which I actually quite like on the album) or ‘Rubber Rocket’ (Switzerland).  Not cool.

Which is when Valentine announced that those were the worst three songs they had that night and now they’d play the best they’ve got, and ‘Down At McDonnelzzz’ (I Shall Exterminate Everything Around Me That Restricts Me From Being The Master) is most definitely one of those, so that was pretty cool.  ‘The New Shampoo’ came and went with a bit of excitement but then came the obligatory over-enthusiasm for one of their flagship songs ‘Gay Bar’ (Fire).  It’s a song with a lot of power and momentum behind it and has inane, sexually charged, meaningless lyrics that are just fun to sing and dance along with.  They took a break in the middle for Valentine to thank the crowd and “The White Wolf” (which is apparently Na$hinal’s other nickname), and people got right back into it for the reprise.  Thankfully they played ‘Gay Bar Part 2’ (Flashy) because I was worried they wouldn’t follow up with it at some point; it’s a great song.  ‘Gay Bar’ parts one and two are very cool.

That went right into ‘She’s White’ from their first album Fire and that was followed up with, “The most Irish song Electric Six has,” ‘When I Get To The Green Building’ (I Shall Exterminate Everything Around Me That Restricts Me From Being The Master).

It was here that Valentine said something that gave credence to the massive shadow that the first five (at least in my opinion) albums cast over the newest five: that they were going to play a song from the new album because they had to.  Not the exact words, mind you, but it was the jist of what Valentine was saying.  I feel like everything after Flashy is just filler material so that they can make a living and continue touring.  I say to continue touring because Valentine seems to genuinely enjoy being on stage and performing but when playing new material he seems to brush it off as if to say, “Yeah, this is garbage, I’ll get back to what we both want in a second.”  It makes the band come off like a Vegas show that has no home in Vegas.  It’s not necessarily a bad thing because their fairly formulaic set-list gives the audience what it wants and lets them play what they want to play and the fans certainly appreciate it.  Anyways, I’m rambling but just to re-iterate for the no one reading this, this is all my opinion and the feeling that I get from things.  The song they made this announcement before was a pretty accurate sum-up for this paragraph, ‘It’s Horseshit!’ (Human Zoo).  This might be cool?

Valentine said he felt like The Imperial was their new home (I’d assume just for Vancouver) which was just a weird reinforcement of my Vegas show thoughts.  ‘Future Is In The Future’ (Señor Smoke) preceded a combination of ‘Improper Dancing’ (Fire) and ‘(Who The Hell Just) Call My Phone?’ (Human Zoo) and then came the big one; ‘Danger! High Voltage’ (Fire).  The song was just as good as I wanted it to be and Percussion World finally stepped up with his drumming after I was thinking that he was pretty boring, and went into a drum solo to mix things up with the stand-by.  The bizarre ‘Adam Levine’ (Mustang) was apparently the sixteenth song, so I may’ve missed one somewhere in there if anyone can fill the blanks.  With that, I’d like to pretend that ‘Good View Of The Violence’ (Human Zoo) was the set ender (even though they played more than their set was supposed to be and they didn’t bother to waste time doing the whole encore thing) because the rest of the set was pretty brilliant.  Major cool points for both Fire songs.

One of my favourites, ‘Synthesizer’ is yet another great song of the debut album.  Nucleus? gets to shine on the song as it’s pretty much all about him and his skills.  Honestly, the live show is pretty just a testament to how good Fire is; those songs will never get old.  Having said that, Switzerland shines pretty bright with songs like ‘I Buy The Drugs’.  It’s another real catchy song that I don’t think a set would be complete without.  Last but not least was unfortunately not ‘Dance Commander’ which I was really crossing my fingers for but instead was ‘We Were Witchy Witchy White Women’ (Flashy) which was St.-Patrick’s-day-appropriately dedicated to lesbians.

And with that it was over.  There was definitely some uncool with the constant reminder that they have ten albums available for sale (though it was for the most part said over and over as a joke) and the personal and pretty firm realization that the band potentially cared as much about the five newest albums as I did but it was more than made up for by the mostly excellent set-list that covered nearly every song I wanted to hear and the band’s occasion-appropriate sleaziness in demeanour and presentation, though this probably is just the standard for all shows.  The material from their first five albums (for the most part) was all still amazing and I got almost exactly what I wanted out of the show so there’s nothing to complain about.  If you go out of you way to see them, it seems like they know what we’re all thinking and will be more than happy to play all those old songs you love over anything new.  So Electric Six; I still think you’re cool.