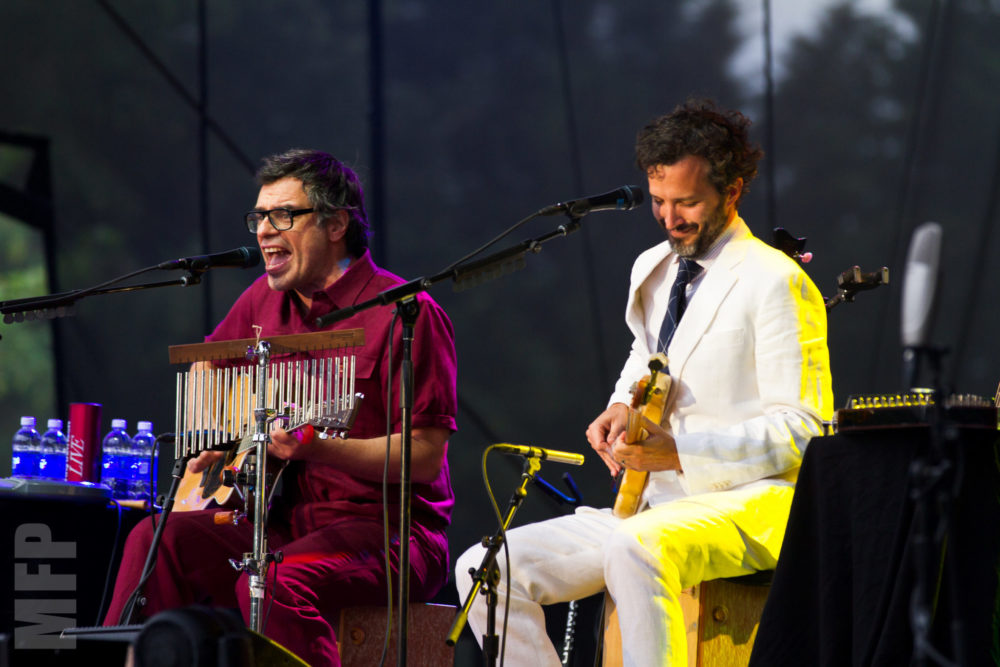 Misery loves company is a saying uttered by people, but I’m pretty sure laughter loves company more. While an act as unique and hilarious as Flight of the Conchords can be enjoyed alone, whether that be in their self-titled show or listening to their albums, it’s so much better with an audience. Unless you sit in front of a group of drunk people who feel the need to respond to every rhetorical question the comes from the stage.

Comedy is a medium that’s weird to see in a large venue, but when the opener is a stand up comedian whose personality is big and weird, it just works. Eugene Mirman’s the perfect person to get the everything going as quickly as possible. There’s no messing around with him, he has the ability to cold start a crowd instantly. Laughter could be heard rippling through the sea of people within ten seconds of his hand touching the microphone. The laughs continued with bits involving an Amazon Alexa, asking a pastor questions and a joke at the expense of Whole Foods. Mr. Mirman’s take on absurdist comedy is amazing and should be witnessed live.

And with little delay Flight of the Conchords came out to uproarious applause and cheers. It’s obvious that even though the band hasn’t released an album in awhile, their fan-base is loyal and large. Jemaine Clement and Bret McKenzie started things off in their trademark deadpan delivery, easing the audience in with hilarious banter. After the first song they brought out the ‘New Zealand Symphony’, which consisted of one cellist, who according to the the Conchords, had at least ‘seen the Lord of the Rings trilogy’. While singing a song about being a seagull, Bret coerced the audience to participate in a squawk along as he flapped his arms like wings and played a piano solo with the grace of the aforementioned bird. The entire set, people were getting up and walking around, which seemed to mystify the band. This culminated when a man gathered his things and attempted to leave while the band was between songs. As he reached the back of the seated section Bret and Jemaine pleaded for him to return to his seat with the promise of more songs. At first, the man ignored the hilarious pleas, but as the audience joined in he stopped in his tracks and did an about face. He returned to his seat, causing the crowd to applaud and cheer, turning his face red.

The night was a nonstop laugh fest, which is the ultimate goal of any comedy show. Yet, Flight of the Conchords brings so much more to the table. Not only are they a hilarious duo, they are also accomplished musician and that places them at the top of this specific sub-genre of comedy.

Flight of the Conchords