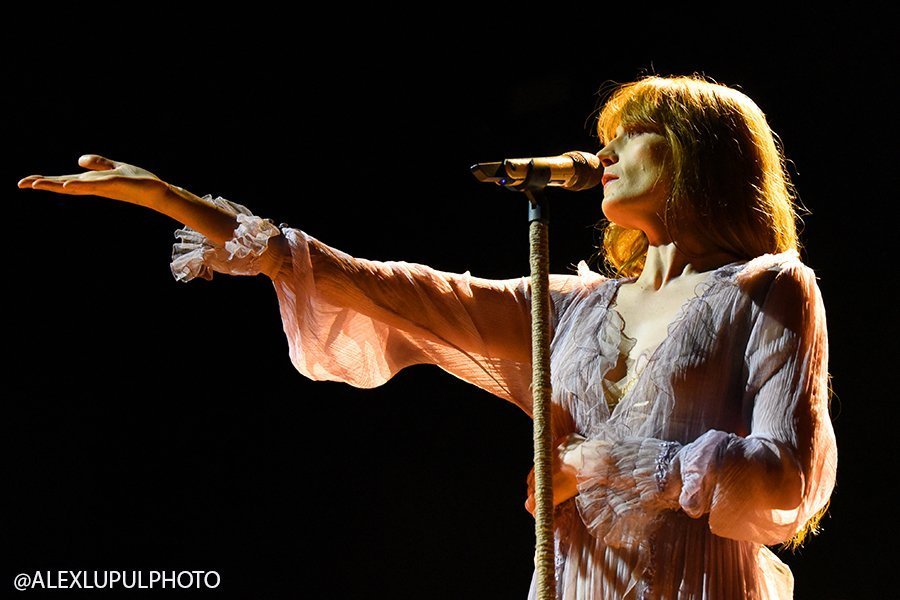 As day turned to night a cool breeze cut its way over the waters of Lake Ontario and into the confines of Toronto’s Budweiser Stage, a chilly reminder that Summer has yet to make its official arrival. Barefoot and lightly dressed in a billowing purple gown, Florence Welch didn’t seem to mind.

Touring behind their Mercury Prize nominated effort “High as Hope,” Florence + the Machine’s tour of the same name brought the band back to Toronto, with English R&B vocalist Blood Orange serving as support.

The selection of Blood Orange (whose real name is Devonté Hynes) goes beyond the mutual admiration both artists share for one another. As Welch went on to explain during a brief pause between songs, “we both started out at the same time, and we used to have a band together.” Despite the two artists’ different musical approaches, they found common ground in an unexpected source. “We were called ‘Team Perfect,’ and we only did Green Day covers,” Welch recounted as she attempted to stifle her own laughter, “I think we did (Green Day’s song) ‘Hitching a Ride’ especially well.”

Welch’s reverence for other musicians wasn’t solely reserved for those on tour with her. Leading into a stripped down performance of “Patricia,” a “High as Hope” track featuring swirling string melodies and Welch’s layered vocals, Welch discussed the song’s titular reference. “This song is about a woman who is very close to my heart, and she told me recently that each time I sang this song that I should know that she was with me. So that means that she is here in spirit with all of us this evening,” Welch exclaimed. “Patti Smith, we welcome you!”

These brief respites between songs were few and far between, as Welch and her miniature symphony of collaborators preferred that their music do the talking, as the collective performed a career-spanning 17-track setlist comprised of new material and fan favourites.

Welch, the spirited fiery-haired front-woman, bounded from stage left to right with great haste, throwing a few spins in for good measure. All the while she never missed a note, her powerful voice and signature vibrato washing over the packed open-air venue.

Whether it’s through her lyrics or her performances, Welch brings with her a radiating positivity even in the most trying of times. “I feel bad that you come to the High as Hope Tour and I feel sad,” Welch admitted during a break between songs, but the emotional honesty of her music and her words seem to resonate with her audience.

Both Welch and her fans seem to desire a level of connection with each other, which Welch is more than willing to accommodate. When the distance between Welch and her audience seemed too great, she bounded down from the stage and up the stairs of the amphitheatre, with security trying their best to keep up, finally settling in amongst fans to sing and dance alongside them.

Welch conceded to the audience that she does love playing live shows because of the “kindred spirits” who flock to her. Welch and co. appear to desire a genuinely positive collective experience at their performances, requesting audience members to put away their phones in order to share the experience together, or to turn to one another and embrace each other during an inspiring rendition of “Dog Days Are Over.” No matter our differences, Florence + the Machine and its fans seem content with joining together under the power of song.