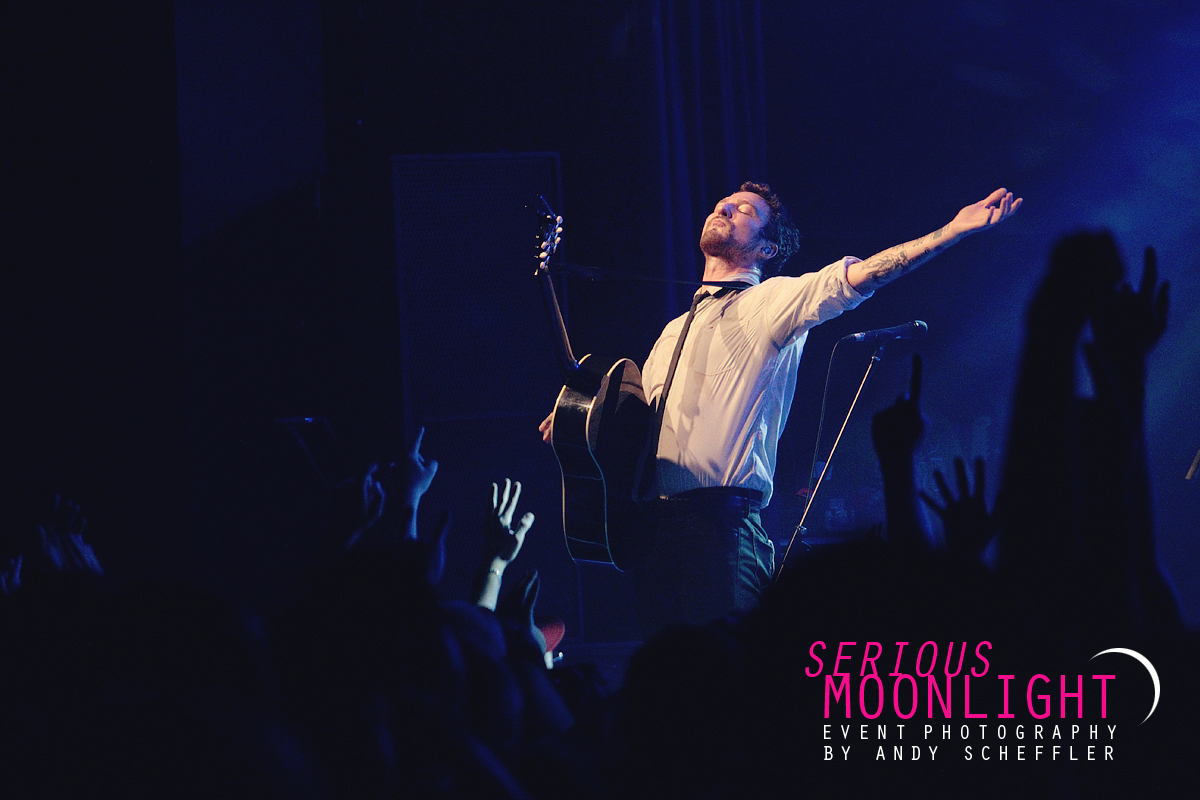 Got in to the room a little too late tonight for the opening band, but was there to see the meat of the sandwich, Northcote. I had spent a bit of time earlier in the day listening to some Northcote, mostly finding the group to be mellow and acoustic. I was anticipating a fuzzy, sleepy set, but in actuality, they’re pretty loud and abrasive! Singer Michael Goud (who arguably simply is Northcote, and also later took the opportunity to weasel in a joke about how he heard there’s ‘already a Matthew Good in town…’) has a rough-around-the-edges voice that brought to mind a Matt Mays or the oft-cited Bruce Springsteen, and is also a pretty captivating storyteller. He’d met Frank Turner long ago, as a fan, and was asked by Turner to hold his Jameson while he talked to fans for like an hour. So, he’s been pretty stoked to be part of this tour. Hailing from a small town in Saskatchewan, Goud also told us there was never much to do growing up but go for drives, get stoned and listen to music. “This tour has reminded me of why I tour – to connect with people. The club doesn’t matter. We could be playing Cafe Deux Soleils [a small restaurant well out of downtown Vancouver],” he said, nodding appreciatively at the crowd. He was also super enthusiastic about getting the audience well warmed up for Turner. Late in his set, he spent a couple of songs singing solo without his band, but they returned for the final couple of tunes. He left the stage to a bunch of cheers, definitely had a contingent of Northcote fans in the audience, and succeeded in his goal of warming up the room for Turner to step into.

Frank Turner has definitely been in Vancouver a number of times before, but this would be my first time seeing him play a show. I am most familiar with his 2008 album Love, Ire & Song, which has its uppity moments, but is pretty folksy. I was envisioning a pretty relaxed show. Just before Frank Turner and his band The Sleeping Souls came out on stage, a fellow photographer remarked to me that she recalled that they “jumped around quite a lot,” based on his last set in town that she’d seen. Well, that was one hell of an understatement. I was hardly prepared for the full-blown aerobics class that Turner’s first few songs were, and being in the pit a couple feet away from his wiry, tattooed frame bouncing all over the place wore me out – I can’t even imagine what it was like for him! During those first few songs, he hopped off the stage and perched up on the riser behind the barricade, playing his guitar within grabbing reach of the crowd – and grab they did! I have a photo of a man who heartily grabbed onto Turner’s lower jaw (photo not in this gallery, but there is one below with the same man tightly gripping Turner’s arm) , seemingly trying to pull him over the barricade. Turner pulled his face and guitar away a couple times to dislodge particularly possessive hands, but he didn’t leave til he’d spent a good chunk of time there. His songs were larger than life live, big, rambunctious tunes good for sharing a hearty drink with a pal, but also clearly showing his new album’s title but also a slogan of sorts, positive songs for negative people. The activity level seemed to level off a bit after the first three songs, but I’m unsure whether this is because he was exhausted, or whether he’d been amping up the action while the media was present in front of him. The bouncing returned fully more towards the tail end of the show, but in between those two points, a whole bunch of interesting stuff happened.

After I scurried out of the media pit and found my spot along the sidelines to take in the rest of the set, the first thing I remember Turner doing is yelling about how there would be no divisions – NO DIVISIONS – in the room, except for one. He proceeded to divide the room into team good and team bad (based on solos that seemed to fit those themes performed by the band member who happened to be to either side of him). “I’m not saying it’s a competition, but it totally is.” The audience was meant to out-cheer each other on singalongs for the rest of the night, with those in the middle of the room participating as swing voters. Turner’s long-lauded affable nature off stage clearly transfers to his on stage self as well. He seems really authentic, and carries on these rambling, funny, conversational chats in between songs. It’s actually quite difficult to keep up with his friendly banter on stage, and certainly to express the easygoing casualness of it. It was just like a night out for him and the band. He had two rules for the night. “1 – don’t be a dickhead. 2 – if you’re lucky enough to know the words, sing along. If you don’t, just make something up.” As seems to be the theme of many shows these days, there was a tribute to Bowie, where Turner urged the audience to “jump the f*ck up and down for Bowie” during the song “Polaroid Picture.” Later in the song, the dedication turned towards Lemmy.

He as well spent a couple of songs alone on stage, the band departed for a short downtempo section. After that, Turner proclaimed, “That’s enough of that,” as the band returned to the stage and brought the energy up a thousand notches again. He spoke about his propensity for getting emails from fans, most (if not all) of which he reads, even if he doesn’t respond. He takes fans’ email requests for songs and tries to work some of them into his set lists for each city, which is pretty great. While I imagine fan favourites are pretty congruent across the globe, it does allow for some likely interesting variation show to show. So he had gotten an email from a Vancouver fan, stating that if he played this particular song tonight, the fan was definitely going to get laid. Turner remarked, “How could I say no to that?” The song was”Heartless Bastard,” a topic that caused Turner some measure of merriment as he pondered how that, of all songs, was the one that would get someone laid. Shortly after, he swapped a line in “Reasons Not To Be An Idiot” to I bet she sits at home and listens to Propagandhi (in the recorded version of the song, it’s The Smiths). I’m not sure what brought that on, but it caused the crowd to yell. At this point, Turner’s shirt was well-slicked to his body with sweat, and he was viciously blinking the same out of his eyes as he roared around the stage, yelling at the crowd.

He also hauled a guy named Matt up on stage at one point with the Frank Turner flag. I had seen someone waving this around all night in the middle of the room, and just figured it was a regular fan thing, not realizing this is a FT tour tradition among fans. Turner himself has nothing to do with the production or transportation of the flag, but there is a home-made flag each tour that travels city to city just via various fans and ends up at every show. Very cool! So this guy gets up on stage, and didn’t quite seem to know what was being asked of him. Turner wanted him to take the flag back, perch on the top rail of the barricade, and wait for the drums to kick in before launching into the crowd and going for a very specifically-routed crowdsurf around the entire room. When he arrived back at the stage, his goal was to break the tie between “Team Good” and “Team Bad” (aka Team Ben and Team Tarrant, named for the band members on each side) that had been divvied up earlier. The guy made it happily around the room, but once back on stage, simply mimicked Turner pointing at the sides of the room rather than choosing a winner. Oh well. Fun times.

Turner came out solo at first for the encore, which ended up being raucous of course and went on for a full five songs. He said he considered this the first official Canadian tour he’s ever done, as in the past, Canadian tour dates have been treated as a side foray from the US. But no, this time they went all the way across, from Halifax, through Thunder Bay, Red Deer, Canmore and Kelowna, among others. In winter too – I bet that was a shock to him. He also told a tale about getting a tattoo in New Brunswick just because a tattoo artist at the show told him that no one ever gets a tattoo in New Brunswick. “I dunno, I was drunk,” Turner stated as he pulled up his pant leg to reveal the tattoo on his left ankle. I couldn’t see what it was from where I was standing. Goud came out to play harmonica for a bit, and then Turner, not yet satisfied with his interactions with the room, took a big step up onto the barricade rail, tightly gripping someone’s hand for support, singing away before taking a dramatic roll onto the audience’s eager hands. He went for a pretty epic crowd surf while singing, where I’m surprised he didn’t disappear or get irreparably tangled in his mic cord, and made it back to the stage safely. He got the crowd to sit down on the ground by saying that he felt he had made friends with everyone tonight and, “friends can ask you to do weird shit.” He just wanted the now-seated room to count off a song together and then jump up and shake the Commodore floor to bits. They complied. The encore ended with “Plain Sailing Weather” and “Get Better,” and that was that! Sweaty, boisterous, friendly – what a show. Unforgettable gig.