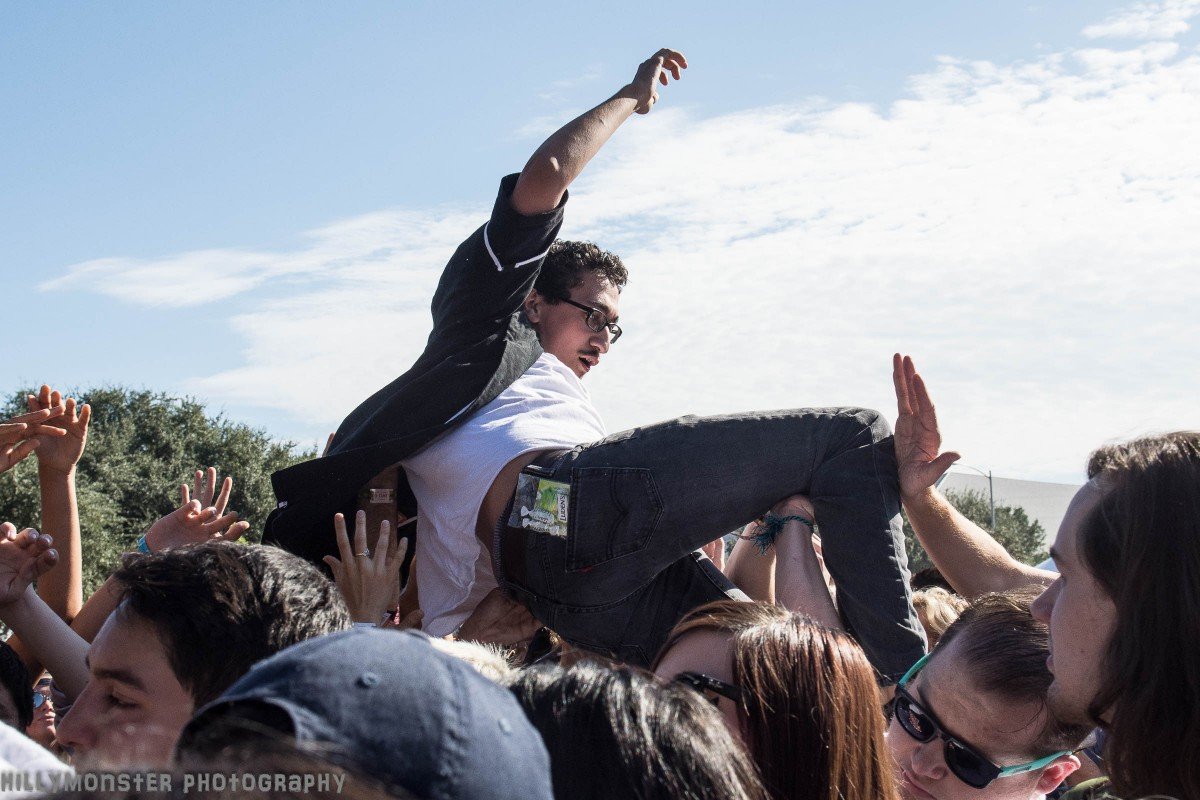 Austin is without a doubt a town that embraces music.  No stranger to music festivals Austin has played host to everthing like SXSW and the double weekend of Austin City Limits.  Fun Fun Fun Fest which started 10 years ago, pays homage to the Austin native and noted eccentric Daniel Johnston.

The three day festival had an extensive music selection of metal, punk, indie, rap, and soul.  In addition to the extensive list of bands, FFF Fest also offered art installations, skate boarder and BMX, comedians, a NASA scientist, a twerking lesson from Big Freedia, and a motivational speech from Andrew W.K.  If the festival proper was not enough to provide with your music fix, FFF Nites offered twelve additional venues in the downtown Austin area to appeal to the late night crowd.  Unlike some other festivals, FFF Nites were free to anyone who brought a ticket to the festival.

Day one of the festival hit the ground running starting out with rock bands Nothing and metal act Mutoid Man.  Punk rock shape shifters the Dwarves took the black stage followed by Brooklyn post-punk Parquet Courts and riot girl band, Babes in Toyland.  On the blue stage, during the performance of artist Peaches, a young man got down on one knee and proposed to the love of his life. He said “yes”. Viet Cong told fans that due to the recent flooding in Austin, they had to take an Uber from Dallas just to make the show.  Math rock Drive like Jehu had their fans sit on the side stage while they performed, meanwhile in downtown Austin, American drag queen Christeene wowed the crowd with her “terrorist drag” and at the iconic Austin City Limits, industrial band Skinny Puppy performed their amazing stage show which included Ogre with various syringes imbedded in his white suit.

Day two started out with a thirty minute delay due to showers but FFF Fest knew the show must go on.  Speedy Ortiz played to a sizable crowd during a light rain storm followed by British rockers the Charlatans UK.  Desperacidos were scheduled to perform but due to Colin Oberst’s illness they had to cancel so Chapel Hill indie rockers Archers of Loaf took their place and proceeded to awe the crowd with fan favorites such as Web in Front, Fabricoh, and Plumb Line.  Shoegaze band Ride took the orange stage and played songs off their album “Nowhere” which was 25 years old this year.  For the last performance of the night, many fans had a tough time decided whether or not to see the comedic punk band NOFX, old school rappers The Wu-Tang Clan or see Jane’s Addiction perform their entire “Ritual de Lo Habitual” record.

Day Three was a sunny beautiful day.  Texas metal darlings Power Trip encourage their fans to start a friendly mosh circle during the warmer part of the day.  Title Fight fans was singing along at the top of their lungs to every song and over on the blue stage, iconic American DJ Afrika Bambataa’s beats pounded the ears of longtime fans.  The Jash Yellow stage was home to comedic act Todd Barry followed by a twerking lesson by Big Freedia before her exploding dance performance on the Blue Stage.  Andrew W.K. manned the Taco Cannon at the Black stage before the one and only DC punk rock legends Dag Nasty.  Riot Girl act L7 played a stellar set while Ms. Lauryn Hill ended the night with a soulful performance on the orange stage.

I can’t wait till next year.