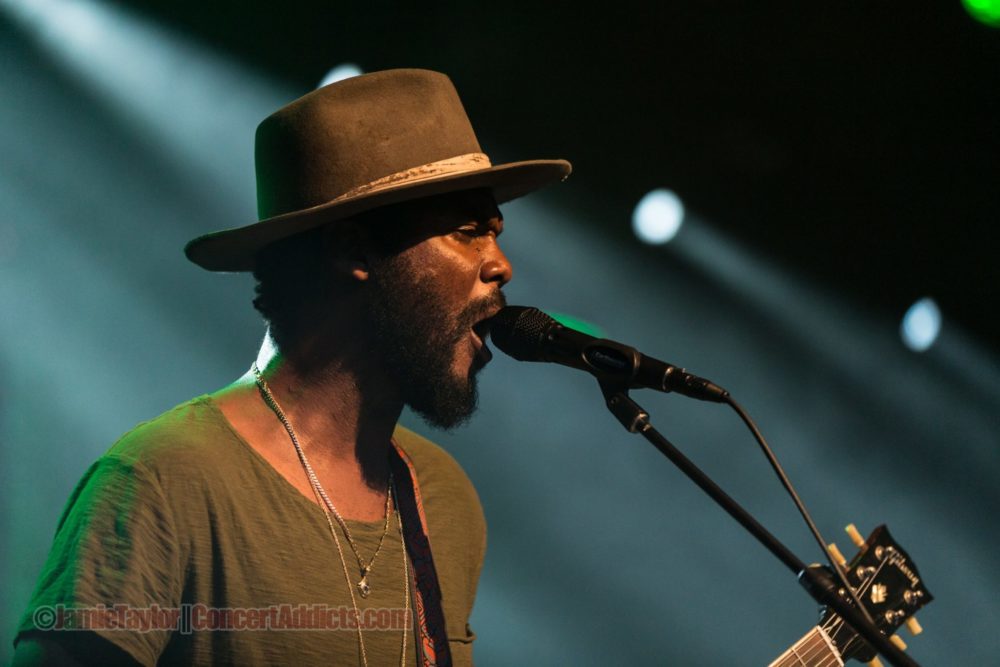 It was the second of his three Vancouver shows in less than a year. What a lucky city! Contemporary guitar legend Gary Clark Jr. played to a sold out audience at the legendary Commodore Ballroom.  Promoting his sophomore major-label album the Story of Sunny boy Slim, Gary Clark Jr. played to an enthusiastic and hypnotized crowd. The excitement of the sold-out crowd was particularly sublime; the pairing of such a renowned artist and legendary venue was a real gift to music lovers.

Casually walking up-to the stage, Gary Clark Jr. took a moment to ratchet up a modest guitar solo, perpetuating a spacey atmosphere before crunching into the opening chord crunch of “Bright Lights.” Spearing into the buzzing, melodic lead, it took about half a minute before the club was humming with energy. Mr. Clark previously played shows Vancouver with the Foo Fighters as well as a previous Commodore Ballroom Show as well as a Venue show once previously.

This evening’s audience ranged the age spectrum with a large portion of mature blues fans who were likely introduced to Clark from one of his high-profile blue collaborations. The man has played with the best, from BB. King to John Mayer. Gary Clark Jr became a star of the blues community after his major debut at Eric Clapton’s 2010 Crossroads Guitar Festival. A native of the same hometown as guitar greats Stevie Ray Vaughn and Billy Gibbons of ZZ Top, Gary Clark Jr. has graduated to larger audiences as exemplified by his many festival appearances and opening slots for major artists.

On this night, the stoic, southern guitarist started off with a bunch of the songs that made his reputation. The set included knocks through “I Don’t Owe You A Thang” “When My Train Pulls In” and “Ain’t Messing Around,” all works originating from his early EPs. Now, with two major label releases under his belt, the celebrated guitarist’s catalogue allows some room for maneuver. Most of the evening’s set consisted of his contemporary moderate pop-inspired forays.

The Story of Sonny Boy Slim continues Clark fascination with forward-thinking blends of soul, gospel, rock and hip-hop, expanding on ideas that were apparent on his debut Blak &  Blu. Concentrating on sleeker arrangements with a three-piece band, Clark’s former co-guitarist King Zapata, was not present on this tour. Previous shows featured the colourful lead injections anchored by Gary Clark Jr.’s chunky, hallow bodied rhythm guitar. Mr. Clark, of course, had no problem executed his set of well honed songs backed only by a rhythm section but the change in arrangement and instruments had a distinct effect. Clark mostly played a variety of solid-built guitars throughout the night rather than his signature style of hollow-body. The band was undeniable skilled; they have geared themselves towards pop, R&B and hip-hop inspired infusions instead of rock and blues forays.

The band had been playing for a full, rewarding, two hours when the real magic of the evening took place. Smiling, with meditative calmness, Clark appeared to savour the presence of the stage, all the while his musical energies burning at full capacity. Wrapping up his final song, Clark started a glowing and meandered guitar solo, mesmerizing in melody without ever exceeding the bounds of taste. There was no excess; nothing was cluttered; it was perfect. Though recognized as a capable song-smith, Gary Clark Jr. should be famous for playing absolutely transcendent guitar. It was an absolute pleasure to see Gary Clark Jr. again at the Commodore Ballroom. Next time, he will need a bigger venue.