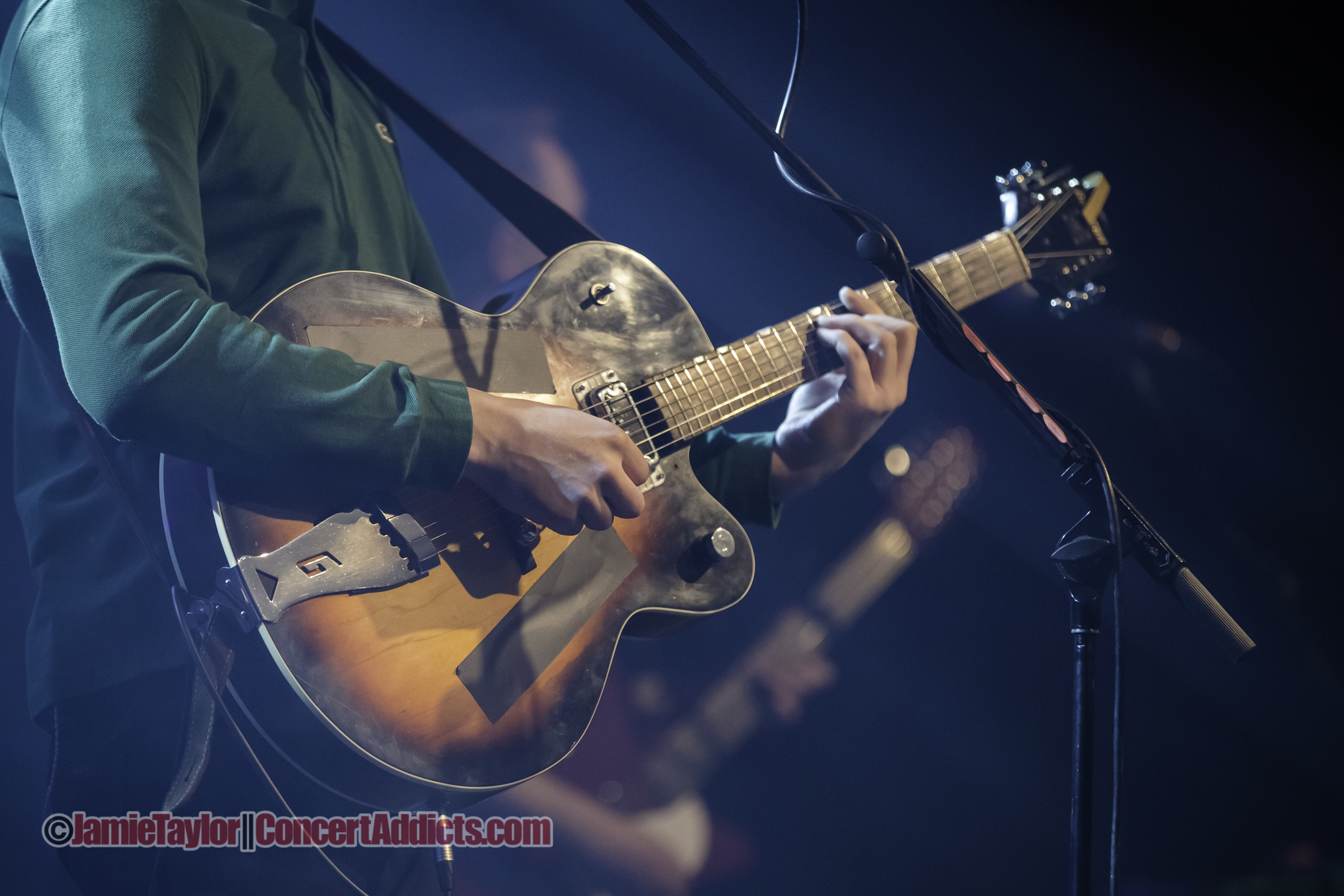 Vancouver’s Easter weekend was coming to a close, and this show tonight was a rather mellow way to end it. Mere minutes after 8 pm, the house lights came down and a five-piece band by the name of Ruen Brothers came on stage. All looking to be in their early 20s, their complement was keyboard, drums, acoustic guitar, electric guitar, bass guitar, and drums. The bass player also plays the bongos for certain songs. All told, stylistically I’d put them in the neighbourhood of pop/rock with bluesy elements. All but the drummer are mic’d, with the dude with the Elvis/’Man in Black’/Alex Turner hair and the acoustic guitar functioning as the main vocalist, with the three others providing back-up vocals. Their 7-ish song set moved along at a breezy and steady pace. Although every song was introduced, sometimes even with a backstory, there was minimal interaction with the audience itself. The floor was about 70% full with people at every table and chair everywhere else, so there were definitely people there. By about the 6th song in, the audience had switched from polite post-song applause to cheers. Well, they do seem to grow on you, in a way. Not sure if that’s the most distinguishing or commendable of characteristics, but there you are. What was odd was that they never once (that I heard, and I asked a couple of people) said who they were. They mentioned it was their first time in Canada, that they’d driven 16 hours from Salt Lake City to get here, that merchandise was available at the back…but not who they were as individuals or as a collective whole. 27 minutes later they were gone leaving me with an impression of ‘bland but competent’. The music discovery evening continued a short time later with the lights coming down again just after 9 pm and cheers and shouts filling the room. With the introduction to “Cassy O”, there are renewed cheers. Heck, even the instrumental break is reason enough to start cheering again. Quiet, semi a capella part of the song: excuse for cheers. There’s some sporadic clapping along to be seen and heard, but mostly, there’s just a lot of love in the room for George Ezra and his three bandmates (drums, bass guitar, electric guitar). With even louder cheers (and a scream or several), “Listen to the Man” began. It’s got a country-bluesy-folksy vibe to it and Ezra’s bass-baritone voice is in really fine form – warm in the low- to mid-range and bright in the higher. Live his voice is absolutely comparable to what you hear on the sound engineered CD – and it’s hard to believe he’s still only 21 years old. 21???!!! Greeting the audience, he mentions it’s his first headline gig in Vancouver and recognises that some of the +1s might have been dragged to the Commodore by their significant others. He offers solace to them by suggesting they look up the video to “Blame it on Me” on the internet, if only to see him get shat on by a bird within the first couple of seconds and then to see him get run over by a car at the end. It’s an upbeat song – I really like the tempo of it (a real toe tapper) and in the chorus, Ezra adds a little bit of a raspy edge to his voice. By way of introduction to the next song, he tells the story of a month-long trip across Europe. He took notes wherever he went and when he got home, wrote songs from those notes. Including one called “Barcelona”. It’s interesting how he stays true to his own style, even with the potential of including Europe’s many music styles – any influences are rather subtle, I find. It’s an incredibly pretty ditty. As the band quietly disappears into the wings, Ezra says he’ll be doing a couple of solo songs. The first one about a friend of his by the name of “Benjamin Twine”. I get the impression this is a very popular song for the audience because a multitude of recording devices are raised into the air to capture the performance. It’s an unassuming song, but the lively picking on the guitar and Ezra’s soulful voice just give it such ooomph. The next song he wishes he’d written, but he didn’t. “Girl from the North Country” is by Bob Dylan. Ezra certainly has a particular style to his songs and he makes them his own, this one sounds utterly in line with those he’s written and already played. This is great if you like his singer-songwriter style; if you don’t, there’s virtually nothing for you at this show so far.

The next song also needed a bit of explanation (and if you’ve noticed, I’m paraphrasing Ezra liberally throughout) as it was written with three of his female friends, who all have nice voices. But, they’re not with him, so he’ll try his best (laughter). Then, for the CD, they got him a choir, also not here, but he’ll try his best. After the first part where the choir would sing, he pointed it out by interjecting “Ladies and Gentlemen, that was the choir”. Every subsequent time he sang the chorus “Leaving it all up to you” the audience offered supportive applause and good humour in general all around.

The band returns, a bit of a lightshow accompanies the song “Stand by your Gun” – this one has really lovely low notes but his higher range and falsetto get a bit of a work out as well. There’s even a funk beat to it and it’s certainly the peppiest song yet. It’s also the first one he didn’t introduce by name so not actually owning the CD, I had to search for it. Luckily he doesn’t have a plethora of CDs so it was a short search (small mercies – if you noticed the blanks in my review of The Cat Empire show, this would be the reason.). We definitely are past the singer/songwriter portion of the evening, even “Song 6” has a lightshow accompanying it, but no actual verbal introduction to the song. Again, there’s a dancelike quality to the guitar line, but this time it belongs to the electric guitar. It just dances along and the crowd sways along with it. The next song is introduced as being the last song on the album (N.B. unless you have the deluxe edition of Wanted on Voyage, in which case, it’s song #12), called “Spectacular Rival”. Really full sound to this song, drum machine assisted (is that the purpose of the mini Korg by the electric guitar player?). The instrumental parts are in such great contrast to the smoothness of Ezra’s voice.

Tells a story behind “Budapest” – if you want more of a complete version of the story (tonight he didn’t mention Malmö at all, but then, we’re in North America – who the hell knows where Malmö is; which is why he said Sweden, I’ll wager), watch his performance and subsequent interview on The Graham Norton Show https://www.youtube.com/watch?v=zUucgkSNZKo (c) BBC. He sounds great. The audience tries singing along from the beginning, and they do alright, except they don’t have a clue what the note is on the “ooh”. None – it’s like they think they can’t reach his note (it’s not that low) and they aim for an octave higher, don’t know what it is and they sing just any old note. Since there are many many people doing this, there are many many wrong notes drowning out the right one. Considering how many times that “ooh” appears, let’s just say it was a litte on the cringeworthy side. Even Ezra was laughing at the end, although, the off-key singing may not actually have been the reason. There is mucho applauso, moreso once the audience realise it’s the end of the set (it was only 45 minutes). For approximately two minutes there are screams, cheers, whistles, the sound of glasses being banged on tables, chanting of Ezra’s name – the works. He comes back alone and immediately starts playing “Blind Man in Amsterdam”. While the band comes on he thanks the audience and tells them they’re amazing. Since it was his first solo in Vancouver, he had no idea how to gauge the audience. Well, he’s got a much better idea now. For the last song of the evening, they play “Did you Hear the Rain”. It’s virtually a capella for the first couple of verses and then breaks out into this great energy of a song. This one has teeth – easily my favourite song of the night and there have been a few. Surveying the crowd after the band has vacated the stage and tear-down has begun (it’s not quite 10 pm, so early in my books), there’s pretty much an all-ages demographic represented – from uni kids to empty nesters. It’s nice to see this multigenerational appeal, and, I only heard one female voice remark they’d like to see him perform shirtless, so that’s good too. Ha, if they want shirtless, Biffy Clyro come to mind, but they’re a completely different kettle of fish. They might not recover. Good thing they were here. I’m glad I was as well.

Setlist:
Cassy O
Listen to the Man
Blame it on Me
Barcelona
Benjamin Twine
Girl from the North Country
Leaving it all up to you
Stand by your Gun
Song 6
Spectacular Rival
Budapest

Encore:
Blind Man in Amsterdam
Did you Hear the Rain