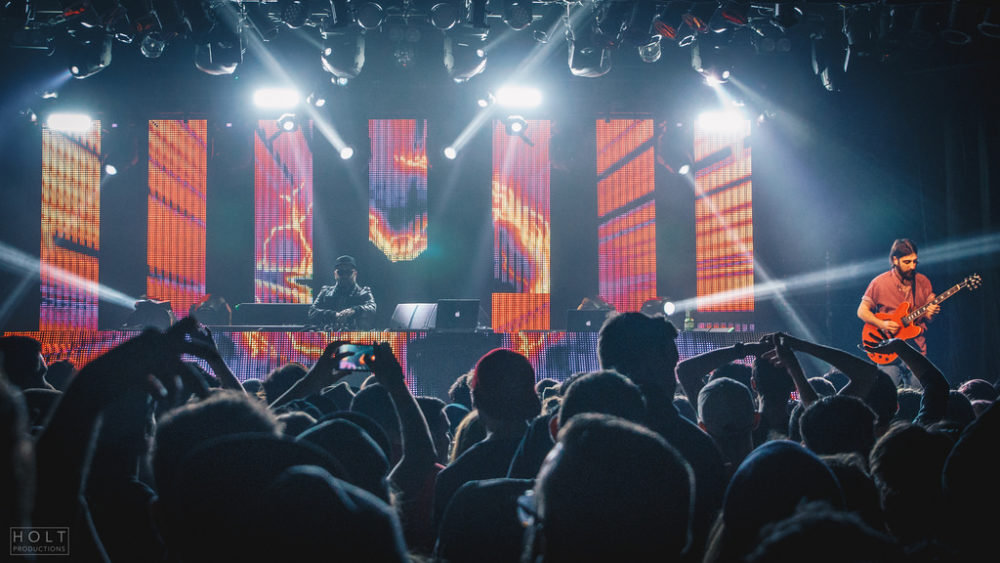 Opening the evening was Balkan Bump, trumpeter and producer Will Magid from Oakland, California who had recently been signed on Gramatik’s own record label, Lowtemp. An ethnomusicologist, he combined his Balkan influences with prolific trumpet solos over a mix of dance and hip-hop beats. Performing as a solo musician, Magid captivated the audience, seamlessly mixing and playing trumpet at the same time.

Balkan Bump got the Commodore’s early bird attendees moving right away with the classic “Hand Clap Song” by The Meters. A healthy dose of trap beats provided a stellar foundation for Will’s wild fingers as he played rapid rhythmic solos in his favourite Balkan style. Magid combined fan favorites such as Missy Elliot’s “Work It” while he played the infamous melody from Jason Derulo’s “Talk Dirty to Me” on his horn, followed by a gorgeous rendition of “Over the Rainbow” and Stevie Wonder’s “Isn’t She Lovely” as his set was coming to a close. Nearing the end of his set, Magid addressed the crowd with a heartfelt speech about love, and to “give each other hugs and drugs”- not that these were the type of folk that needed to be told such a thing.

Following Balkan Bump was classically trained jazz pianist and producer Martin Vogt, or Haywyre. Vogt moved to Vancouver from the United States to pursue a musical career, and has since signed to a local electronic label, Monstercat. Playing in front of a friendly hometown crowd, Haywyre put his piano virtuosity on full display, with his keyboard elevated and tilted upwards to give the Commodore crowd a prime view of his technical abilities. Haywyre’s set up allowed him total command throughout the performance, using his Ableton Push controller to mix, allowing him the freedom to explore his keyboard which he armed with a funky, talk-box style lead.

Haywyre opened the set with a couple of originals, including “Endlessly”, and “I Am You”, a pair of low-tempo electro-anthems, both of which left plenty of space for jaw-dropping solos on the keys. Haywyre continued with more originals like “Memory”, and “Do You Don’t You”, which increased the tempo and energy level that he maintained throughout his set. To properly prime the Ballroom for Gramatik, Haywyre finished his set with a pair of remixes including, Outkast’s “Mrs. Jackson”, and his incredibly popular remix of Michael Jackson’s “Smooth Criminal”. If you haven’t seen the youtube video of Haywyre’s Smooth Criminal remix, do yourself a favour and check it out.

Finally, the Slovenian-born, Brooklyn-based DJ, producer, and record label owner Denis Jašarević – more commonly known as Gramatik – took command of the decks for his Re:Coil Tour. Gramatik played keys and was accompanied by guitarist Adam Stehr, continuing the evening’s theme of live instruments combined with heavy-hitting electro-funk. Gramatik took his set a step further with a darker, heavier sound and a copious mix of funk, hip-hop, and dubstep.

The first half of the set had plenty of guitar and keyboard solos as they performed hits such as Stevie Wonder’s “Superstitious and “Good Times Roll” by GRiZ and Big Gigantic. Gramatik