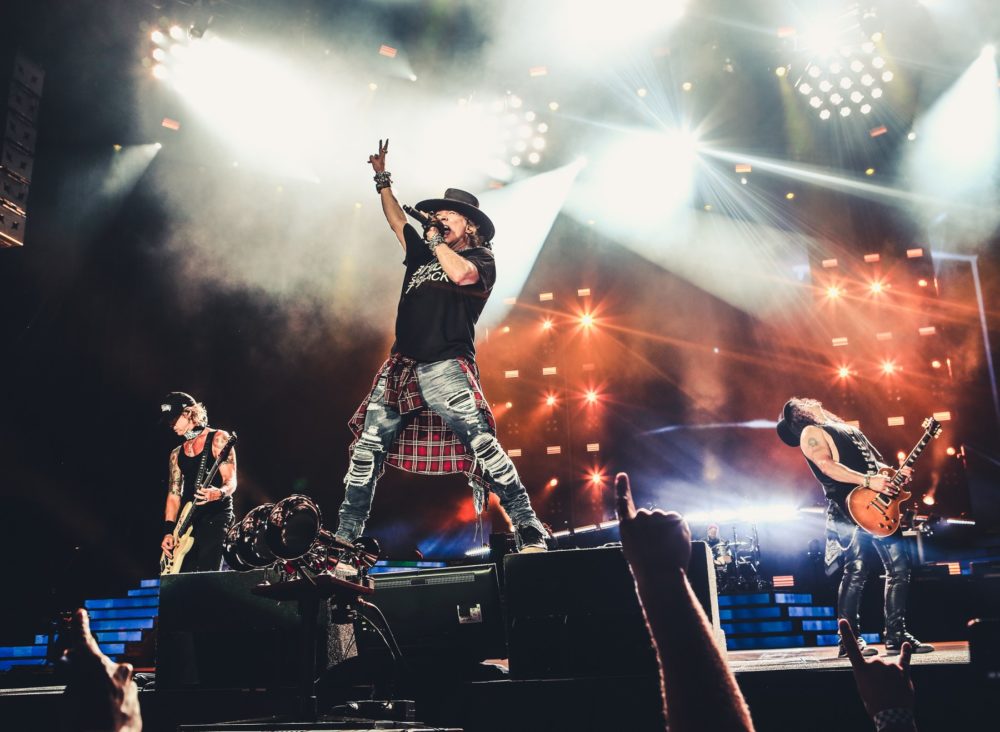 It had been 23 years since I last had a chance to see the “real” Guns N’ Roses live. Back in 1993, the band came through Vancouver, BC and I was but a twelve year old angsty teenager just learning to find music I would love. Axl and the Slash were among the first musicians to draw me in and get me hooked on their rockstar ways.

Unfortunately the person my friend and I entrusted to acquire us tickets, just didn’t do it. I was devastated.

Fast forward to last night, I found myself walking up the stairs at CenturyLink Field in Seattle, WA. The anticipation in my body was bubbling over, I could hardly contain it.

I didn’t know what to expect at all.

Openers Alice In Chains started my experience off on the right foot. The hometown heroes rocked the stadium as the seats slowly filled out. Starting the night off with Hollow from the bands fifth album The Devil Put Dinosaurs Here, set the crowd in a great mood. High fives and pumping fists could be seen all around. The band was tight, and vocalist William DuVall delivered a stirring performance. They culminated their 11-song offering with Rooster, a song that funnily enough was release as a single in 1993 off the bands 1992 album Dirt. The majority of the audience chimed in and sang karaoke-style along with the tune, a sea of people singing “Ah yeah, yeah/Yeah, here come the rooster, yeah/You know he ain’t gonna die” It was pretty damn breathtaking moment to experience under that solid blue sky.

Full Alice In Chains set list
Hollow
Them Bones
Again
Check My Brain
Down in a Hole
No Excuses
We Die Young
Stone
Man in the Box
Would?
Rooster

With the intermission between bands I found some time to buy some merchandise, something that was definitely not in short supply. My bank account took a fair bit of a hit, but I think it was worth it to round out my already black-t-shirt filled closet with more rock wear.

I returned quickly and settled back into my seat. In mere minutes I would be seeing something that I had only dreamed about for over two decades.

The lights in the stadium dimmed and the crowd lost their collective minds. I watched as Axl, Slash, and Duff filter to the stage.

I was in pure awe.

They started their set on solid footing with It’s So Easy from 1987’s Appetite for Destruction. Axl’s voice was solid out the gate. He worked around the stage with a feverish determination, never missing a beat.

The entire band looked to be in great spirits. Lead guitarist, Slash, rocked a number of killer solos with a big old grin strewn across his face. Bassist, Duff, strutted around the stage in the typical bass-player stance, with his Seahawks hat worn proudly on his head he always seem to have this look on his face that said, “I am fucking proud to be here”, as he gazed out across the crowd. Axl introduced the keyboardist, “Ladies and gentlemen, on the keyboards, Mr. Dizzy Reed”, leading into a beautiful piano solo in Estranged, and I nearly shed some tears. At that exact moment a wave of emotion washed over me. I could feel that this was all real. The band was playing so well together, they were feeding off the crowd and creating that perfect rocker-to-rockee symbiotic relationship. The boys were back, and I was happy to witness it.

Mid-way through the night, the band was introduced and that rolled into Slash doing him infamous Godfather solo. Chills rattled down my spine. The audience screams almost drowned out the speakers. On the big screen, the camera panned in, Slash peered out from under his dark locks, a toothy, elated smile formed on his face. That may have been one of the bets moments of the night.

Since this was a big ass rock show, the stage setup and pyrotechnics were abundant. Most songs were punctuated with a burst of colorful explosions from behind the stage, with the finally of the night being a fireworks display during Paradise City that lasted for nearly 5 minutes.

Check out this fan-shot video of the display:


As the audience filed out, and the chaos subsided, I took a moment to reflect. This tour could very easily have been a cash grab. It could have been a bunch of once-was’ trying to cash in, but it wasn’t. It was a group of rockers coming back to prove they still have it, and blowing everyone’s socks off.. The show was nearly three hours long, each individual artist gave their all and proved their ability.

Guns N’ Roses are back. Now we wait to see where this goes from here. I am not holding my breath for new music, but another batch of North American tour dates doesn’t seem impossible.

Full Guns N’ Roses set list
It’s So Easy
Mr. Brownstone
Chinese Democracy
Welcome to the Jungle
Double Talkin’ Jive
Estranged
Live and Let Die
Rocket Queen
You Could Be Mine
You Can’t Put Your Arms Around A Memory/Attitude
This I Love
Civil War
Coma
Band intros into Slash solo – Speak Softly Love (Love Theme From The Godfather/Andy Williams)
Sweet Child O’ Mine
Better
Out Ta Get Me
Jam (“Wish You Were Here/Layla”)
November Rain
Knockin’ on Heaven’s Door
Nightrain