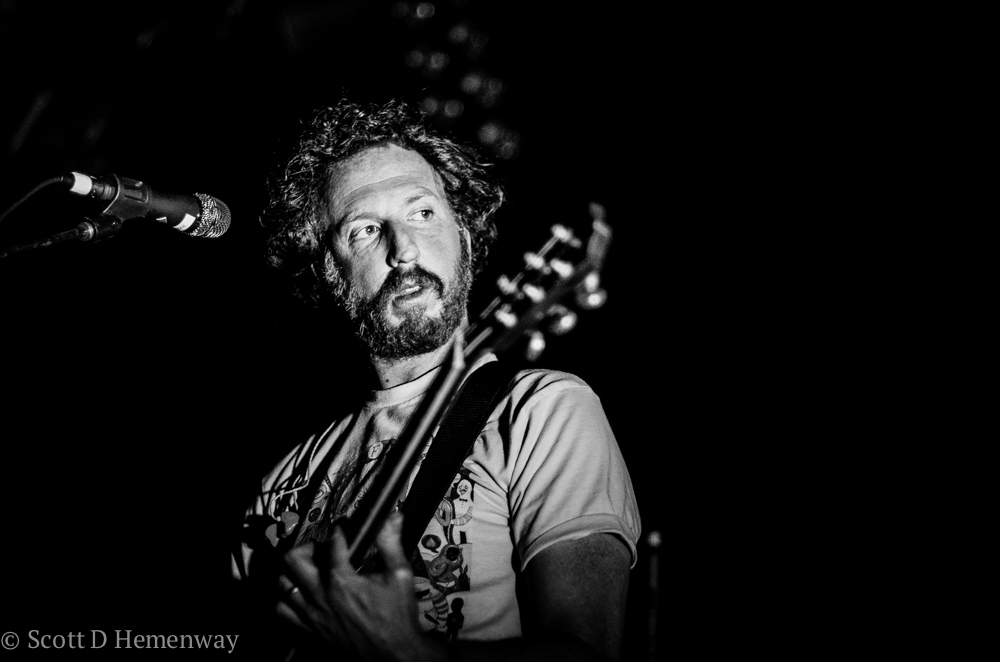 I arrived at Venue to see opener Kishi Bashi on stage in the middle of a rollicking tune. Normally in band format, helmsman Kaoru Ishibashi was flying solo tonight, and repeatedly remarked about how nervous he was as he’d not played solo in some time. He is definitely an energetic guy, getting the audience dancing as he bounds around on stage. Sometimes he creates his loops and then just jumps about, sometimes he keeps a violin tucked under his chin to create layers and layers of strings to sing on top of. Occasionally, he even holds the violin like a ukulele and plays it rather adeptly in that format. I found the longer I listened to him, the better the set got. He’s got a voice that cascades all over the place, rolling effortlessly up and down. In between songs, he nervously chattered away about our unusual age of majority compared to the US, how longtime tourmates Guster assumed he would be the authority on why there are so many Asian people in Vancouver (“I had to do some serious Wikipedia-ing about that…. but yeah, there are a lot of Asian people here.”), and how much he enjoyed visiting the local sights. He ended the set with a beautiful tune called “Manchester” and then hopped offstage to let Guster take over.

Guster calmly took the stage and swung right into “Long Night,” the lead-off track from their newest album, Evermotion. It’s a gorgeous song and the sound tonight was absolutely huge, filling Venue to the rafters. There is always so much going on during a Guster show – 6 band members constantly changing spots and handling different instruments, from standard bass, drums, guitars, to ukuleles, trumpets, trombones, keyboards and a swathe of percussion instruments. After they concluded “Long Night,” it was time for some brief chitchat. Someone in the crowd yelled “We missed you!,” to which frontman Ryan Miller responded, “I miss you… I don’t remember you specifically, but I miss the general feeling of Vancouver. We’re going to play a selection of songs tonight and we hope we play the ones you want to hear.” The audience did not seem disappointed in the selection.

I was amazed to learn that they hadn’t played in Vancouver since 2003, when Maroon 5 was opening for them. Kind of hilariously, Maroon 5 was playing in Vancouver this same night as well – at the local hockey arena. Ah how things have changed! I missed that 2003 show – the last time I saw this band was in 2000 – yikes! As well, Guster had just gotten back from, also amazingly, their first ever European tour. Miller said they had been playing very tiny venues, and they’re just getting used to playing to rooms where people know who they are a bit more again, and not feeling weird about being “a bunch of Jews playing in Germany for a week. I swear you have a couple drinks and the Germans are like, ‘we have to talk about zee war…’ No really! It happened!”

After this anecdote, they bounced into “Lightning Rod.” Following a couple more songs, it was anecdote time again, and Miller went on to tell us about the last time he was in Vancouver himself, to visit the set of the movie 40 Days and 40 Nights, and he got arrested at the airport when a sniffer dog located an ancient, dusty tip of a roach in his bag that wasn’t actually his. It was a pretty lengthy tale culminating in a 3 person strip search, and the whole time, his bandmates were jamming behind him before they carried on into “What You Call Love.” This band is a riot to watch – there is always so much happening, you almost lose track of the band members for all the switching around. Miller’s voice is versatile and smooth. Following “Lightning Rod,” someone in the audience yelled out “More like that!” Miller responded with, “More like that? That’s good feedback, thank you. This next one starts slow but don’t get bummed out… it picks up near the end… deep deep doop.” He wasn’t kidding. That song was “Come Downstairs And Say Hello,” and indeed it was soaring by the end of the tune with 80s sounding synths and the promised deeps and doops.

Interestingly, when the horns come out, it reminds me more of Gonzo in the Muppet Show intro than anything else, even when it is well-done, but there was an intentionally-mediocre trombone component to “Never Coming Down” that amused all on stage and off as it blatted out across the room. After this Kishi Bashi returned to the stage to join Guster on a couple of songs. Miller looked genuinely astounded at some of the sounds he was coaxing out of his violin. After some solid jazz hands and ragdoll dancing to a couple more songs, a fellow in the crowd invited himself up on stage. “Why do you want to come on stage? To drink..?!” It was such a bold move, I think Miller had no choice but to comply and invited the guy up on stage. So, this guy hopped on stage, introduced himself as Ryan, and handed his beer bottle to Miller, who remarked “yeah, this is a good idea. Okay, go over there. Okay, you can sit there but don’t touch anything…” Ryan took a seat behind a keyboard at the back of the stage and proceeded to drink whatever was in the glasses on top of said keyboard while Guster played through the next tune. “If you don’t ask for what you want in life, you never get anything. “ Touché. Ryan politely left the stage after that song, and ever replaced the drinks he drank.

After the slightly reggae-kissed “Lazy Love,” Miller told us that they had a couple more songs left, one for the regular set, and one for the encore, but they weren’t going to walk off the stage in between the two because it would be a pain in the ass. He thanked Pat (their new crew member who was doing a bang up job and they hoped wasn’t going to quit), Ryan the whisky afficionado, all their current and former opening bands, Victoria’s Secret models and Will. I. Am’s new watch company, then played “This Could All Be Yours.”

Technically that ended their regular set, and they all sat around on stage for a couple minutes, waving and drinking, before getting into the encore song, “Ruby Falls.” I actually thought this was a bit of a weak one to end such a gutsy show with, especially considering the powerful opener, and the feel-good, energetic vibes of much of the rest of the set. Either way, it was a fun show and a good Sunday night place to be.