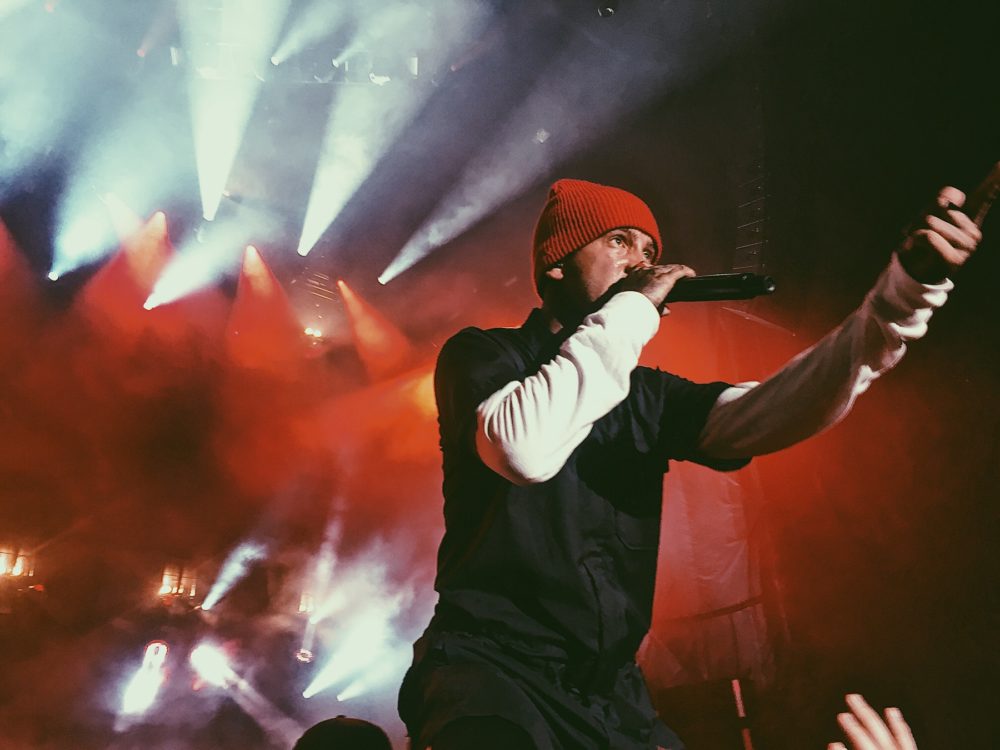 2016 quickly became the year of Frank Ocean. After many thinking the Independent star was lost at sea, his visual album “Endless” and soulfully smooth album “blonde” dropped within 24 hours of each other. The introverted artist seemed to have made a full comeback with the edition of “blonded radio” on Apple Music and singles such as “Chanel, “Biking,” and Calvin Harris’ “Slide” in 2017. When Ocean’s name emblazoned the headline of Friday night, Hangout Music Festival quickly became the must-see music festival of the summer. Of course, similarly to Ja Rule’s “Fyre Festival,” it was too good to be true as “production issues” would stop Frank Ocean from washing ashore in the Gulf. Although Phoenix was a quick replacement for Frank on Friday night, the merch tables littered across the venue served as a constant reminder of what could have been. However, not all was lost. Run-ins with The Heydaze, partying with iHeartRadio’s Gossip Greg at Charli XCX, Bishop Briggs on Fitz’s Stage, and the onslaught of good shows from 5:00pm on, Friday proved that somewhere, someone got it right; Hangout was much more than it’s headliners.

Laying in the surf shop across the street from the venue, I knew I had work to do. The video of deep sea fishers played over and over again above my head, passing the time until the venue opened; I just wanted to be inside. I’d been to festivals before, I’d been to good festivals before, but today was the first time I would have media access at a festival. Today was the first day I would experience the whole piece for once. The Gulf Shores provide warm summer days, and you don’t really expect it to rain, thunder, and storm during a festival on the beach. You might prepare, but you don’t really expect it. Then it happens. The festival began on a beautiful, sunny Friday where I had the opportunity to meet possibly the most entertaining man in Alabama: iHeartRadio’s “Gossip Greg.” He showed me what it meant to really embrace a festival, gave insights on where I was allowed to go, and, most importantly, the quickest way to deflate the bouncing inflatables that travelled across the crowd so I could take home a souvenir…or three.

Bishop Briggs, Mac DeMarco, and COIN lit up their respective stages providing passionate performances like I haven’t seen in a long time. The night for me, however, peaked with Andrew McMahon in the Wilderness followed by Russ. It was obvious that Russ’ “cult-like” following had crept into the crowd, surrounding AMITW and his loyal fans to sneak to the front row for the following set a few hours later. After all, I was guilty of this myself. What I certainly didn’t expect was how good Andrew McMahon was and how much effort he really put into performing. I will never forget the moment we shared underneath an oversized, rainbow parachute with him singing his heart out in the middle of the crowd. It seems that the artists that made the headliner a “headliner” really proved themselves as equals here in Alabama.

“There’s Really A Wolf,” Russ’ debut album, dropped on May 5 and, if you know Russ, you know that doesn’t mean Sh!t. It’s theorized that Russ was born with a mic in his hand, and truthfully if you had seen him perform at Hangout Fest, you would have believed it easily. Perhaps the most relieving part about Russ is the fact that his catalog is incredibly deep. You may have just heard of him, but you could easily spend the next week listening to new music from him without a repeat. Russ is fierce, talented, and is selling out venues on a consistent basis, and with respect to MGMT, Weezer, and Phoenix, Russ stole the show on Friday!

The entire tone of the festival changed Saturday. The weather was cooler, the clouds were sprawled over the coast, and the prayers went up. “Twenty One Pilots is tonight, please don’t take this from me,” I whispered to myself hoping that somehow, someway my words would cure the weather. I was a little uneasy as the day went on, but as I was walking over to Tory Lanez, the sun slowly peeped out from beneath it’s cloudy cover. Having seen Tory along the Nobody Safe Tour, I was growing excited and increasingly optimistic. Tory Lanez, if you didn’t know, has a tendency to hide all his best music on mixtapes. For those of you waiting for the album, as much as I love “I Told You,” there is nothing like listening to Lanez spit something off one of the “New Toronto” mixtapes. Tory combines steady rhymes with extremely versatile vocals to create music that can only be described as “SWAVEY.” From his raw talent to incredible stage presence (and lack of it i.e. his frequent and rather legendary crowd surfing), Lanez thrives in live performances and was a huge win for this, and any, festival lineup.

What followed was an extremely bittersweet moment. Understanding that Twenty One Pilots would be performing at 9:30pm, I made my way to the Hangout Stage roughly two hours early. It was packed, as it should be, for Tyler Joseph and Joshua Dunn. What annoyed me was the obscene amount of people who seated themselves at the front with blankets and backpacks to reserve space. While I respect the commitment, this was the first festival where I had run into this issue (and quite frankly, safety hazard.) Regardless, I was determined to witness this spectacle as close as humanly possible. After half heartedly listening to the Band of Horses set, which comparatively was lacking in their given time slot, I had reached about three people back from the front row. That, of course, is when the rain began. It was nice and cool, but it was also a sign of what was to come. An announcement lit up the live screen boards: “Twenty One Pilots : New Start Time : 9:00PM.”

They began their set and immediately their dedicated fanbase noticed the change in setlist. Rather than playing full songs, they began doing short snippets with the attempts to let the crowd hear as much of each song as they could fit. The stage was readjusted to perform the planned MUTEMATH mashup/collaboration as fast as possible. Forty-five minutes into the set, Tyler stopped to tell the crowd that severe weather was threatening the coast, but insisted on one more song.  If there is one set you do not want to cut short, it is Josh Dunn and Tyler Joseph’s. If there is one fan base you do not want to disappoint, it’s the skeleton clique. Sure enough, half way through “Car Radio,” between scattered downpours, the audio cut out Tyler’s mic was silenced, leaving Josh’s drum beats and Tyler’s unamplified voice the only remaining noise. Rather than boos, the crowd continued the song in harmony. Although it was clear that Tyler and Josh were upset, it was an amazing experience to hurt with them, with the understanding that it had been cut short by someone else and that if Tyler could have stood longer in the crowd and Josh could have continued beating on his drums, they would have performed all night long. Twenty One Pilots has always had my “fan-ship” and now, perhaps indefinitely, my respect.

Going home was hard as tears were shed from fans across the venue. Sunday didn’t seem bright. It was an afterthought and the festival honestly felt over. It’s incredibly hard to bounce back from that, even when your headliner includes Mumford and Sons. Although weather held off, it didn’t help that Lil Yachty was a disaster of a performer and DJ Snake cancelled hours before his scheduled set time. Chance The Rapper was phenomenal, as usual, giving a stunning performance. I think it simply wasn’t enough to make Hangout 2017 the legendary festival it could have been and that this festival season desperately needed. The live stream of a stacked Coachella looked bleak, lifeless, and deflated. Fyre Festival was more than a disaster, and of course, Pemberton filed for bankruptcy. The next festival I foresee as a “make or break” is Bonnaroo with a strong lineup, a large number of tickets sold, and an overall strong festival tradition. I still look forward to Hangout Music Festival 2018, and of course the rest of the 2017  festival season!