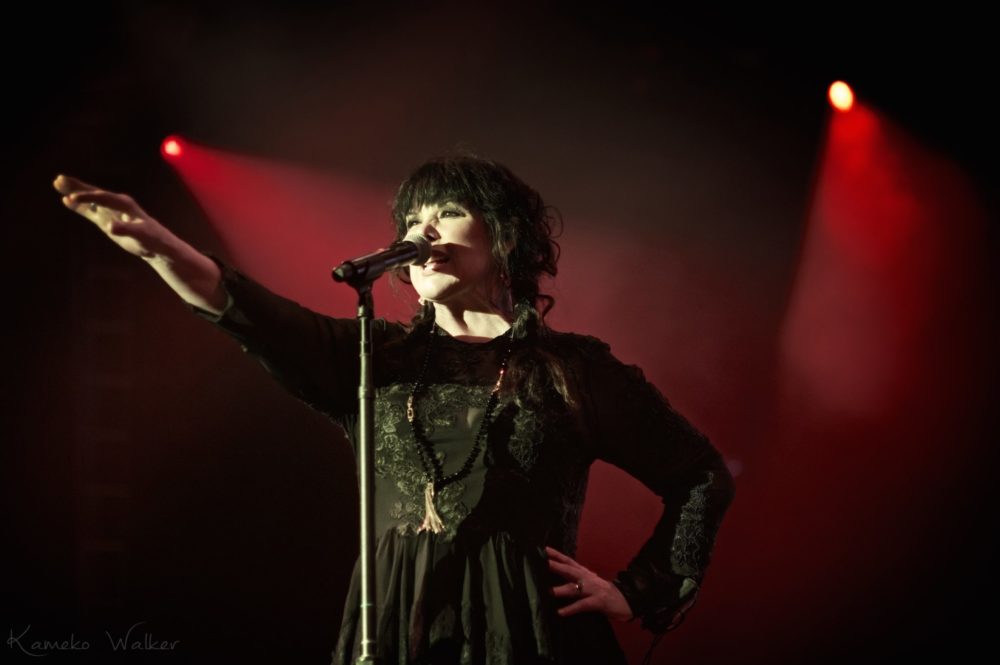 There is probably nothing more sublime than an evening of Rock & Roll Queens kicking ass for over 3 consecutive hours – and that is exactly what Heart set out to deliver as they embarked on the first night of their ‘Queens Of Sheba’ Tour this Monday, with Joan Jett and the Blackhearts at their side.

Opening that show – and hailing from Niagra Falls – were Serena Pryne and Nick Lesyk of The Mandevilles. As fans mingled and found their seats, the pair played a handful of songs including “Runaway”, “Windows and Stones”, and “I Stole Your Band” – all of which received ample applause from the audience. Pryne’s perfect, gritty, rock & roll vocals were as beautiful as they were tough, and the Canadian duo had enough energy to fill the whole stage. For an acoustic set, they did not disappoint.

Next up: Joan Jett & The Blackhearts. Heart may have been headlining, but for myself and many other fans – seeing Joan Jett was going to be just as awesome. After much anticipation, the lights dimmed, the band name appeared onscreen and the Blackhearts ran onstage as screams from the crowd mixed with the sounds of a cheery 1961 instrumental sample by The Mar‐Keys. And, when the timing was just right, Joan did what she always does best and smashed it to pieces with “Bad Reputation”. The screens flickered with old music video clips and when 57‐year‐old Jett stood in front of the words “You can’t sing” and “Come back when you’re dressed like a lady”, in all her leather‐clad glory – commanding a wild, receptive audience like a total boss – she reminded us exactly why they call her the Queen of Rock ‘n Roll.

The Blackhearts played for a solid hour, and Joan interacted with the crowd between almost every track. People cheered as she made reference to her first band, The Runaways – and when they played those all-female 70’s punk hits like “Cherry Bomb” and “You Drive Me Wild” I felt like I was right back in high school, watching the screens flash with video clips of a young woman who I always tried to emulate as a teenager.

In the last few minutes of the set, the energy in the room exploded and everyone was on their feet for “I Love Rock ‘n Roll”. Fans remained standing for “ Crimson and Clover” as they sang the words in perfect harmony and the dreamy pink stage lights enveloped Joan & her band. They closed with “I Hate Myself For Loving You”, and finally – returned to the stage for their encore of “Everyday People”. In the end, The Blackhearts bowed before an elated audience, and disappeared backstage to the 50’s tune of “Rock ‘n Roll is Here to Stay”. Point proven.

Now, expectations were high – as were the levels of enthusiasm. Music played over the speakers, balloons danced over our heads and just seconds after George Harrison crooned his ghostly words “…and life goes on within you and without you”, the music stopped, the room went dark, and the crowd roared with excitement as Heart finally took the stage. The iconic sister duo opened with “Kick it Out”, followed by “Heartless” (which was when Ann Wilson pretty much blew everyone’s mind with her almighty vocals). Their band finished up an unexpected James Brown cover while the ladies introduced the group & themselves before melting into the sharp, fiery lyrics of “Straight On”. Throughout the entire show, Ann

Wilson was serving up equal parts sass and attitude, and it was the best thing ever.

The 80’s love songs were not forgotten either, “These Dreams” and “Alone” were on the setlist and Nancy Wilson took over the mic on a few songs as well – including “Two”, written by Ne‐Yo (yep…that Ne‐Yo) and despite the unlikely combination, Heart did more than dazzle everyone with that track, too.

For 15 songs, the Wilson sisters killed it. Ann wowed us once again with “Magic Man” and Nancy taunted the audience with a playful acoustic intro to “Crazy On You” before literally everyone flipped out and continued to do so until they finally ended with, obviously, “Barracuda”. The ladies returned to the stage and dove into 3 more songs for an all‐Led‐Zeppelin encore, and the night officially came to a close with their cover of “Misty Mountain Hop”. They received – and earned – a standing ovation.

Decades have passed since these rock & roll heroines rose to fame, but time hasn’t dulled their “stick it to the man” splendour or the amount of praise they continue to receive from fans around the world. Seeing these bad ass women completely owning it in their 60’s was the greatest thing, and this tour will not leave its ticket holders disappointed.