Last night, I was left sweaty and smiling by an aggressive and masterful performance by Mr. Jack White and co.

The evening started off when I walked up to the main entrance thirty minutes before doors were set to open.

Standing there, in line, I listened to those around me recount their previous Jack White experiences. From solo set stories to anecdotes involving White’s previous band credits à la The White Stripes, The Dead Weather, and The Raconteurs. There was a familial feeling, a genuine camaraderie among the patiently waiting fans.

Once doors opened, it took a few minutes longer than normal to get us through. This event was a “phone-free” experience, so, every cell phone had to be placed in a Yondr pouch, which was subsequently locked, only to be re-opened upon exit from the venue. The whole process was simple and quick. You hand them your phone, they place it in a neoprene bag, they tap it against an electronic piece that engages the bags locking mechanism, and then they hand it back to you, mere seconds.

Venue entry was complete, I proceeded over to the merchandise table and sniffed out the date-specific poster for the event. I had my cardboard tube in hand, ready to sheath my acquisition the moment the transaction was complete. I don’t mess around when it comes to maintaining pristine posters for my collection.

It was then off to the general admission floor area to stake my claim as close to the stage as possible. I found my sweet spot just near the first dozen or so feet from the front rail, slightly off from dead centre, and there I waited.

Detroit garage-goth rocker Olivia Jean soon made her appearance. A tall, slender frame woman with a jet black bouffant, her name in a twenty-foot tall psychedelic font glowing behind her. Jean is running under White’s Third Man Records label; with both her solo work and her work with her band The Black Belles.

The set was highlighted with rolling waves of surf rock and exciting bits of rockabilly all housed in something gothic, then further punctuated with a sort of playfully tortured vocal. At first, the droves of Jack fans were hesitant to this unfamiliar sound but after a couple of songs, the mass around me could be seen rocking their heads, emphatically pumping their fists, and getting swept away in those eyes-closed swaying moments. Music is a magical beast.

Ms. Jean earned a number of new fans last night. So, if everyone could keep an eye on her record sales for that Vancouver bump to make itself known, that would be great.

Olivia and her bandmates departed the forefront.

The platform before us soon swarmed with activity as stagehands in a mix of ‘30’s styled suits and striped dress shirts with suspenders and trilbies scurried about getting things ready.

A video feed of a sound engineer’s console appeared on the giant screens at the back of the stage. It featured an analogue clock, kicking off at ten minutes it counted down, presumably to the start of the show, but throughout its journey, a shadowy, animated figure of Jack White would mess with the time resulting in cheers and jeers from the bated-breathed crowd. 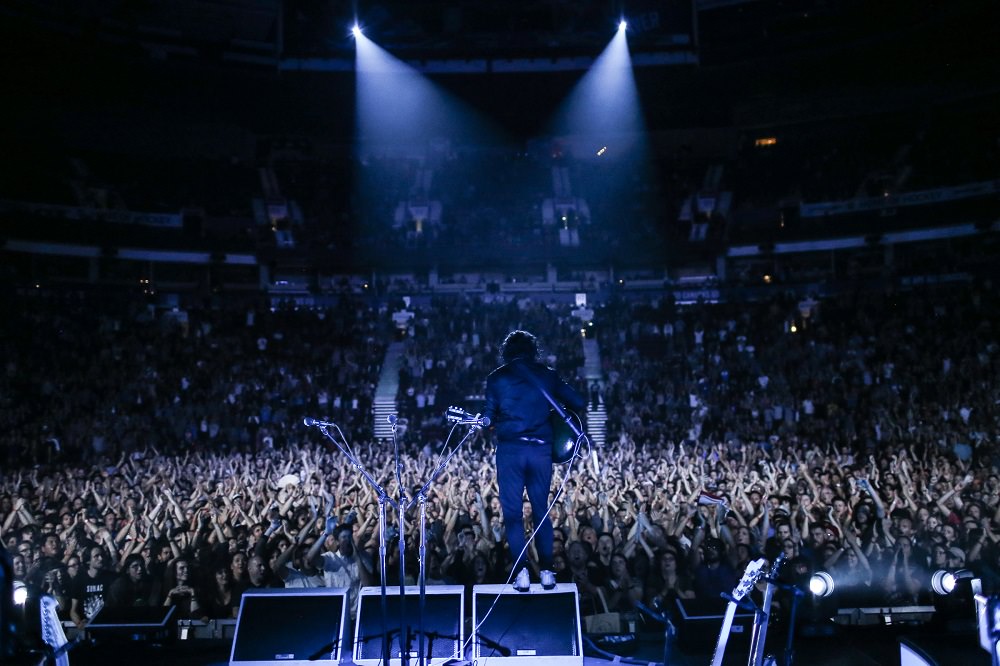 The timer finally hit zero and the house lights dimmed, out walked the band, followed by their spirited front man. They each took their position; Carla Azar on drums, Dominic Davis on bass, Neal Evans on synths, Quincy McCrary on keyboards, and White at the helm. They quickly rolled into “Over and Over and Over” from the Detroit rockers latest release Boarding House Reach, the songs punchy and crunchy riff carried through the air and electrified the audience. Their anticipatory potential energy bubbled over, culminating in many in my vicinity to overdo their reaction. For a few brief moments, it felt like I was at a punk show.  A small circle pit opened up, bodies began thrashing about, but then it subsided and the expected head bobbing and rhythmic arm thrusting ensued.

I watched in complete awe as Jack became a man possessed.

His delivery and mannerisms were aggressive and genuine, he was a man on a mission, a man of focus and determination.

He worked the stage in his black southern-styled button-up with black slacks juxtaposed against his all-white, pointed-tip John Fluevog ankle boots, likely sported as a nod to their creator, who operates and resides in Vancouver.

The band carried the energy and stormed into “Dead Leaves and the Dirty Ground”, a White Stripes track from their 2001 album White Blood Cells. That infamous fuzzy guitar laid over top of deep-stroked drum beats and repetitious high hat tings, eliciting another raucous crowd reaction around me. This time the chaotic jumping about stuck and a song-long sweaty dance party ensued.

Jack looked majestic, standing center stage, he peered out from behind a veil of perspiration soaked hair, he commanded our attention, a small grin creeked across his pale visage.

That little smile made an appearance throughout the set. It usually followed moments when the band lead was staring back at the maniacal mob of fans chanting before him, an appreciative reaction for the support and just being humbled by it all.

The stage strucutre was fairly minimal, all following the monochromatic design elements of the latest album in the hue of blue.

Behind the band were three thirty-foot-tall screens that aligned to form one mega display, each one able to pivot 360 on its own center axis to reveal a wall of stage lights on it’s backside. The displays added visual accouterments to each song, sometimes just streaming snippets from the official music videos for the particular songs and other times playing funny tour-made clips of the various band members. A quick snippet of Azar tossing darts at a Trump poster here and a dash of Evans shooting a clone of himself with a plastic bow and arrow there, it added some levity to an otherwise impactful and heavy evening of deeply intense music. 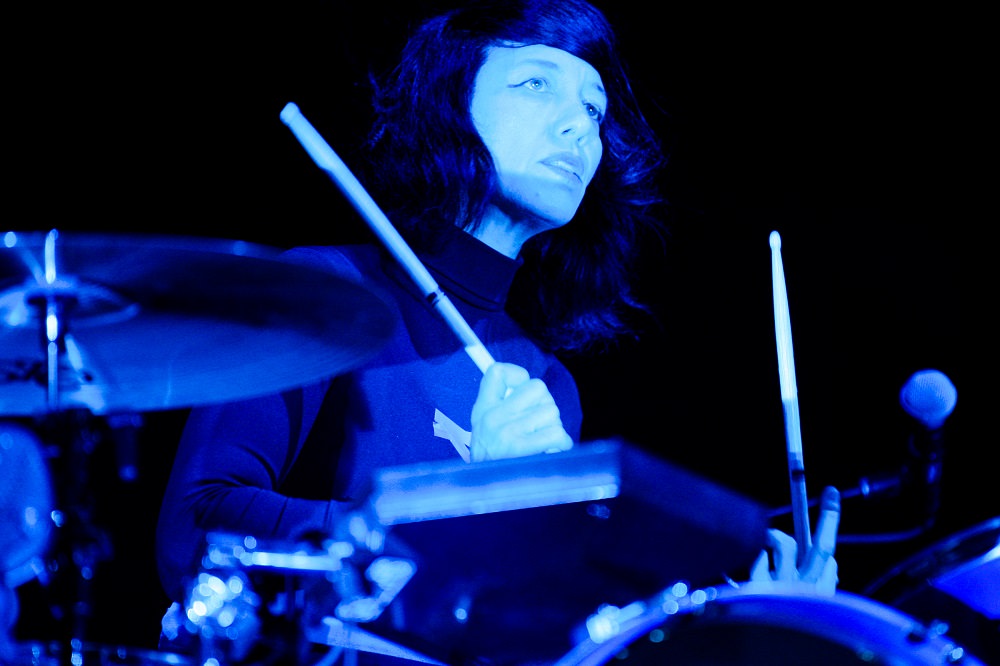 The symbiotic relationship between musicians and fans steamrolled forward, building momentum. Jack and Azar and Davis and Evans and McCrary would give a little more and the voracious audience would give it back, rinse and repeat until the arena somehow felt intimate.

I didn’t feel cold and vacuous like some other shows I have seen there.

It felt like it was overflowing with unbridled passion and hearts full of love, just something special that you can’t put your finger on. That thing that makes the hair on your neck stand up for no reason, a goddamn miracle.

The three songs leading into the encore hit one after another like a three-punch combo; You Don’t Know What Love Is (You Just Do As You’re Told), The Same Boy You’ve Always Known, and High Ball Stepper.

The musicians said a quick goodbye and hopped out of sight. The crowd stared back from the dark with eager excitement coursing in their veins.

After a few minutes, the band rejoined the stage and dove into their four-song encore, one that opened and closed with two highly-loved White Stripes tracks.

First up was “Icky Thump”.

Carla beat the hell out of those drums with such purposeful movements and powerful strokes, it was beautiful.

The fanatical mass around me screamed the lyrics along with Jack. The song has grown into a political anthem over the past couple of years, aptly being re-purposed as “Icky Trump” in response to the heinous anus with the Cheeto head running the United States of America at the moment. 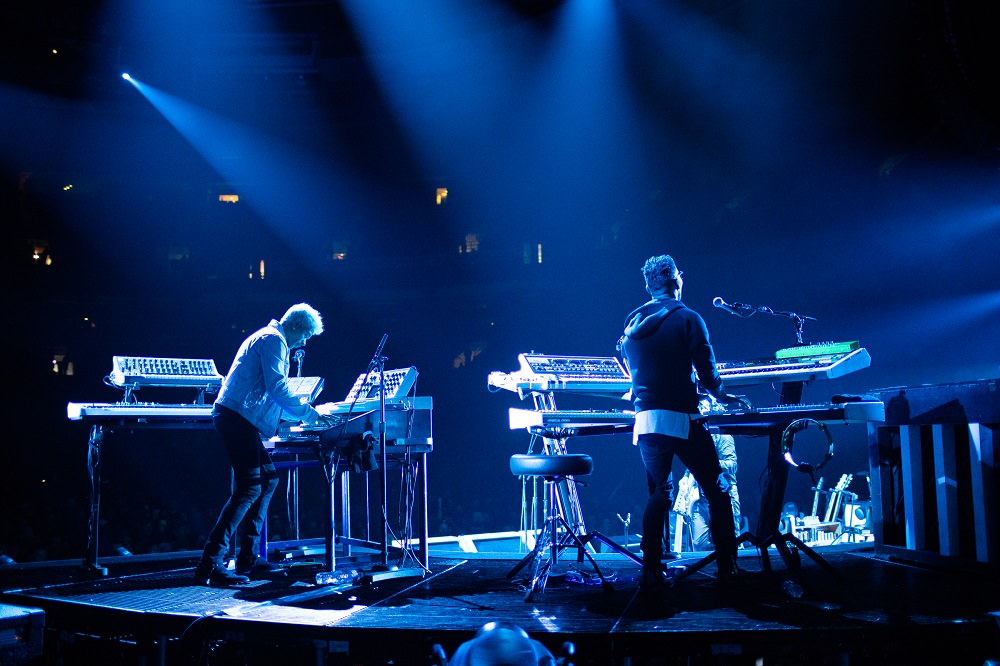 We jumped around to the rhythm, we sweat on one another, and some of us lost our voices screaming those lyrics – “Who’s using who / What should we do? / Well, you can’t be a pimp / And a prostitute too”.
Soon the one-two-one-two opening beat of “Ice Station Zebra” swooped in, building with that sexy piano layer and near spoken word vocal portion. Though more of a toe-tapper on the album, it carried some smooth ass-shaking vibes in its live form.

“Connected By Love” grabbed the torch, it seemed to wrap up the unified feeling as we all stared back wide-eyed at the stage. Of all the songs in the night, this one carried the most vulnerability in White’s voice. There was a present emotion in his vibrato, a realness that tugged at your heart strings.

Rocking and swaying about, I looked around.

No cell phones, I had completely forgot. Instead, across the arena lighters dotted the darkness like stars.
The absence of electronic devices wasn’t noticeable until you thought about it. There was no distraction. There was not drunk person in front of you texting or filming every second, we were all in the same moment, undistracted, and… connected by love.
Finally, that legendary bass line kicked in and we all followed into the first verse – “I’m gonna fight ’em all \ A seven nation army couldn’t hold me back”.

The night wrapped with a stellar performance of the White Stripes classic “Seven Nation Army”, off of 2003’s Elephant.

That was the second we all went a little mad. Pure unadulterated rock ‘n’ roll coursed through our veins, pumped feverishly out by five musicians pouring their blood, sweat, and tears into the ether.

The song culminated, the last part of the last verse rolled through the air – “And the stains coming from my blood \ Tell me go back home”.

Jack White and his group of lovable misfits blew away any expectations I had, they delivered a set that will go down as an infamous night, for the band it was just another Sunday night.

White thanked the crowd and then closed things out by encouraging everyone to start a grassroots campaign to bring back the Flying V jersey, the already mind-blown crowd cheered their approval.

The musicians gathered together and took a bow, then departed the stage.

The crowd filtered towards the exits.

The show was over.

Thank you to Jack White and Olivia Jean and the rest of the musicians for an unforgettable night.

To those that were in attendance, you experienced something special.

To those that weren’t, you made the wrong choice.

For those looking for the date-specific poster for the night, don’t worry, I got you.