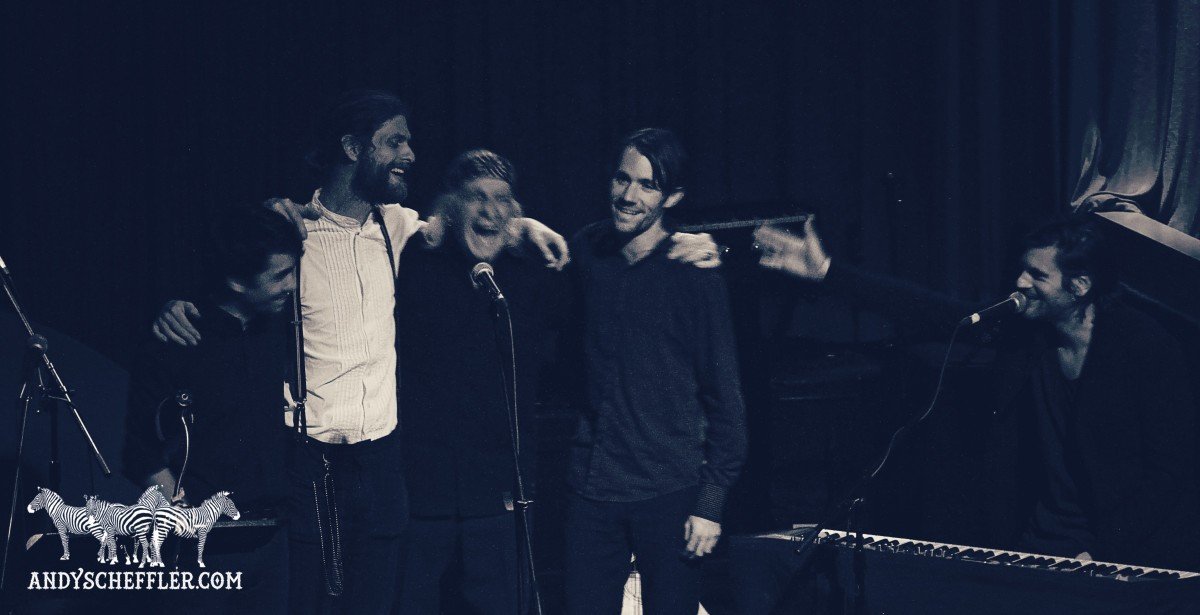 It was a mellow night at the Fox Cabaret for Jay Malinowski & the Deadcoast. I imagine a lot of the media folks were at the Foo Fighters show that evening, and I ended up having the place to myself in that regard, but was nonetheless a bit taken aback at walking in to the venue to see rows of chairs neatly arranged in front of the stage. This was a different vibe than I had anticipated to be sure! On the stage, a variety of microphones, boxes and instruments were placed, and finally, we were signaled to the impending show start by a mellow tone that slowly increased in speed. This show was a release kind of gig for Malinowski’s illustrated novella “Skulls & Bones.” The artwork is drawn by the talented Malinowski, to accompany letters from a sailor named Martel to his granddaughter. The letters are based on Malinowski’s own grandfather’s writings and have a nautical theme with appearances by Poseidon, plastic gyres, ghosts, family history, ships and love from the wild Cape Breton coast of Canada.

To start the show, the legendary Don Francks, a Vancouverite who, as Malinowski later put it, jumped on a ship in the ‘50s and no one knows what he did (well, we do know – he was nomadic, he acted, played music, voiced cartoons… Doctor Claw from Inspector Gadget, folks!… etc. etc.), came out to a podium at the front of the stage, clicked on a small desklamp, and began reading some of the excerpts from “Skulls & Bones.” His voice is well-traveled and mesmerizing, and while he never actually stumbled over the words, there were a few moments of hesitation where he may have over-read, but he always fluidly recovered from these moments. The room was enraptured and silent, seated and well-behaved. When he had finished his first reading, he switched the lamp off, and quietly, Malinowski and the Deadcoast (2 violins and 1 cello, buried in the teal darkness at the back of the stage) shuffled onto the stage and began a song. There were no drums. In this first song, there were no guitars. Malinowski was up front singing and playing a harmonium, the only time that instrument made an appearance. After the song was finished, the room remained silent. No one was sure if they were intended to applaud, and no one dared break the silence.

In between each mellow, powerful song, Francks would return to his podium and desklamp to read another portion of Skulls & Bones. We began to get quite wrapped up in the life of the sailor Martel. During the readings, Malinowski would slink around the stage, looking at the floor, listening and grinning at certain passages, or slowly moving towards whatever instrument he would play during the next tune. He cycled between guitar, piano and simply singing. Francks read a passage at one point that including a question posed by Martel… “Did you hear that?” A pause. Malinowski laughed and stomped one foot on the floor. Laughter erupted from the men on stage as well as the audience. Francks looked over at Malinowski, chuckling, as Malinowski said, “Let me try it again.” He stomped his foot on the floor louder, Francks repeated his, “Did you hear that?,” question and continued the read. Francks really did steal the show in some ways. Because the time was divided quite equally between songs and readings, and the room was blush-coloured and dim, it was like having your grandfather read you an animated bedtime story. He was outfitted all in black, with a headband around his head, and amazing velvet slippers. Between his readings, he often perched on a stool, intently watching Malinowski sing, sometimes tapping his hands on his knees or humming along.

Malinowski’s songs fit the theme, with a haunting and peaceful quality, filled with a certain yearning. His voice is one of his most alluring qualities, with an interesting gravel and tone hitch that are as unique as this singular show was. This was the first full run of this type of set for him and the Deadcoast. Of course, Malinowski’s band history is notoriously with Bedouin Soundclash, and I might have been the only person in the room who was not originally a fan of that band before following Malinowski to his solo work. I think his solo work speaks volumes louder and is much more interesting sonically and content-wise. I overheard a few people pondering if he would play some songs from that former band, perhaps little realizing the distance he had put between himself and that part of his musical journey. I expect some of those people were a little surprised at the tone of this show. A one song encore saw Malinowski at the piano, while the Deadcoast players and Francks stood arm in arm in the middle of the stage, swaying and singing along with smiles. I have to say I have never been at a show quite like this. It was relaxing, refreshing and engaging. Malinowski’s artistic talents range wide. He has moved back to Vancouver following his ‘bigtime’ musical days in Toronto, and now spends time writing words and music, drawing and painting. He seems to have really found his game creatively.