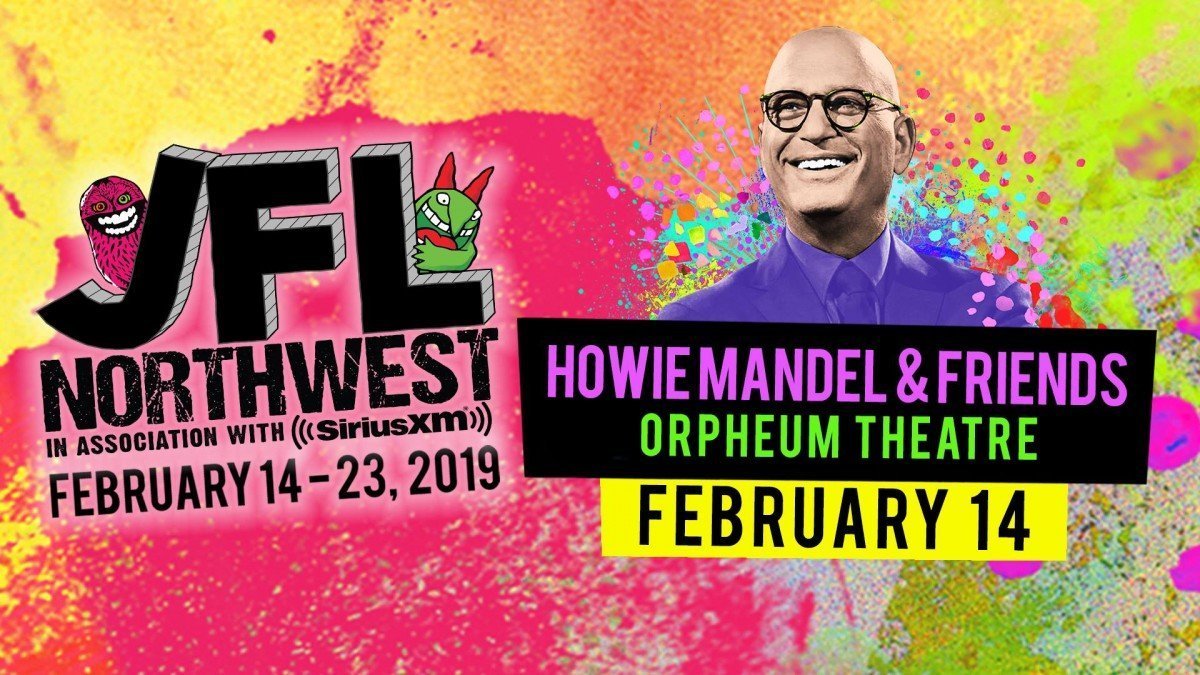 What better way to spend Valentine’s Day than watching a lineup of comedians with your partner.

On Thursday night, the JFL Northwest festival kicked things off at the Queen Elizabeth Theatre in Vancouver, BC with a lineup of some of the funniest comedian around.

Canadian comedian Howie Mandel played host of the night and kicked things off with a ten minute set to get the crowd warmed up. Mandel is currently best known for being a judge on America’s Got Talent, but it wasn’t that long ago that he was a top-rated comedian selling our huge tours all over the world and voicing a well-known cartoon called Bobby’s World. His set was well crafted and featured more four-letter words than I would have thought. It is clear he is still a good writer and a great story teller, taking simple stories and morphing them into relatable material. His best bit was about buying jock-itch targeting nut cream for a sudden bout of athletes foot.

The first comedian Mandel brought up to the stage was his good friend John Mendoza, an American writer from the previous generation with a history of making Johnny Carson laugh and starring in a sitcom in the mid-nineties called ‘The Second Half’. Mendoza is a road-gig hardened veteran that talks about life through the lens of a pessimist. His bits were quick and to the point, a classic style stand-up act. I enjoyed his sharp wit and casual delivery and the fact that he wishes it was okay for people to punch their kids in the head from time to time.

Chicago’s Matteo Lane took the reigns and showcased his fast-paced set focused mostly on his experiences as a gay man. Matteo is quick to the joke leaving little breathing room between punchlines. His set was exciting and had the audience roaring with laughter. You can catch Mr. Lane on Netflix’s The Comedy Lineup and get a feel for his unique style and take.

German comedian Flula Borg followed. He put on a deconstructed set where he feigned being a DJ trying comedy for the first time. It was awkward and made people cringe but that was its intention and it was downright hilarious. Flula made a number of appearances on Comedy Central’s comedian-battle game show @midnight. He is a stellar writer with a feel for the strange, make sure to check him out.

Canadian-American writer DeAnne Smith brought her gluten-free, fair-trade leaning angles up next. She doesn’t wain away from who she is, her self-reflecting content and warm personality make her a delight on stage. She carried a strong confidence but at the same time she made light of her vulnerabilities. You can catch her set on Netflix’s Comedians Of The World.

Last set of the night was from American comedian and The Daily Show correspondent Roy Woods Jr. This set was the most personal of the evening, it had the weight of a sixty minute special crammed into 10 minutes. He talked about the death of his father but wrapped it into a bit on the supernatural. He was a great choice as a closer. Hi writing was filled with his fears and insecurities which the crowd locked on to. It was personal but consistently funny.

Howie came out one more time and thanked the crowd and had the comedians back out for a final bow.

It was a splendid way to kick off the second annual JFL Northwest festival.

If you have a chance to check out any of these comedians, make sure to take it. Each one was fantastic in their own right and they helped many couples have a great Valentine’ Day.