JFL NorthWest This Is That @ The Vogue Theatre – February 27th 2016 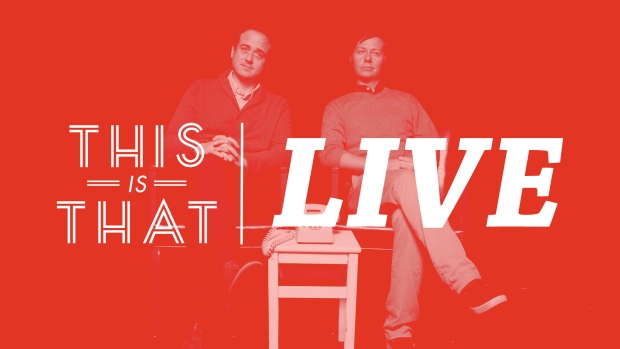 No Radio? No Problem! The  Just For Laugh’s NW Comedy Festival included an endearing live performance by CBC satirists This Is That. Written and performed by Pat Kelly and Peter Oldring and producer Chris Kelly, This Is That is an ingenious branch of modern satire that wields mundane public radio as a comedic weapon. Designed to resemble an actual News program, This Is That  proudly fabricates all of it’s news stories. Kelly and Oldring’s performance at the Vogue Theatre illustrated the hidden process and extensive talents of the show’s creators. The unscripted nature of the process was a surprise to many; this is raw, live improv under a thin veneer of mock-journalism.

For those unacquainted with This Is That, the show is essentially a Canadian equivalent of the Onion in radio format. While the Onion generally scores on overly explicit jokes, This is That thrives on subtle twists and incongruity. Throughout the comedic set, which spanned over an hour, each of the radio duo took turns playing the “straight-man” journalist interviewing some sort of kooky community interest group. Scenarios for the evening included speaking to a mother’s interest group keen on baby-proofing Parliament Hill (the most dangerous part of the Canadian capitol buildings are the fact that they are situated on top of a giant cliff), a spaced out conversation with a respected, award-winning Canadian novelist who spent half their life as a guest on CBC radio and an interview with a pair of star-crossed mayors keen on amalgamating two towns thousands of kilometres apart. Each skit featured five journalist calibre questions that would be, often than not, derailed through bizarre, rambling small talk, illuminating many quirky Canadian truths along the way.

The show’s highlights included an interview with a prison warden from Texas who planned on extended Second Amendment rights, i.e. the right to bear arms, to his inmates, “in case some weirdo tries to break into the prison.” Also of hilarious note was Peter Oldring’s imitation of  a Margret Atwood type-celebrated author, described her morning as “lugubrious” while lamenting about her cat’s uncertain origins: “I’m not even sure where it came from; it just showed up one day.” This character’s celebrated book titles included “Snow Bank Sandpaper,” “the Seven Year Nap,” “Roger’s Face” and “Magdalena’s Surprise,” (which can be called “Maggie’s book” for short, she assured the audience). The non-stop, intrinsic details are essential to the comedic sense of This Is That; the show manifests itself through exaggerations of reality that are normal, if not ridiculous, for anyone who regularly listens to CBC Radio. Absurdity is stretched yet does not abandon the complete limits of rationality; it’s all really silly, but it sounds as if it might be true.

While This Is That’s performance was a special live performance treat for BC comedy fans, so much of the show’s strength lies in its place on national radio broadcast. The most beautiful thing about this satire is when public runs with a farce, believing it to be true. In those cases, the comedy is more than a punch line, it is a rich inside joke that rewards the attention of the listener.

This Is That feature a rare comedic value, the kind that gets funnier upon repeated reflection. Did you hear about the Ontario Soccer Association that removed the ball from it’s league play in order to facilitate less competitive play? Fox Sports did, and missed the joke entirely,  referencing the “piece” in a piece titled “the Death of Sports.” This is the work of comedic genius.

Since it was the last stop on the show’s A Good Portion of Canada Live Tour,  Kelly, Oldring and Kelly delighted the audience with a short Q&A session where they opened up about their craft. It turns out that it’s all improve built around an intro set of 5 journalist questions, which the comedic duo learned in their training at the CBC. Since the show’s inception Canadian Radio hasn’t quite been the same since.  “The show is a barometer,” Peter Kelly told the audience in response to a question about their pieces getting picked up as real news stories; “a lot of people who work on real, credible news shows, before they often do a story now ask themselves, “Is this a This Is That type of thing”?