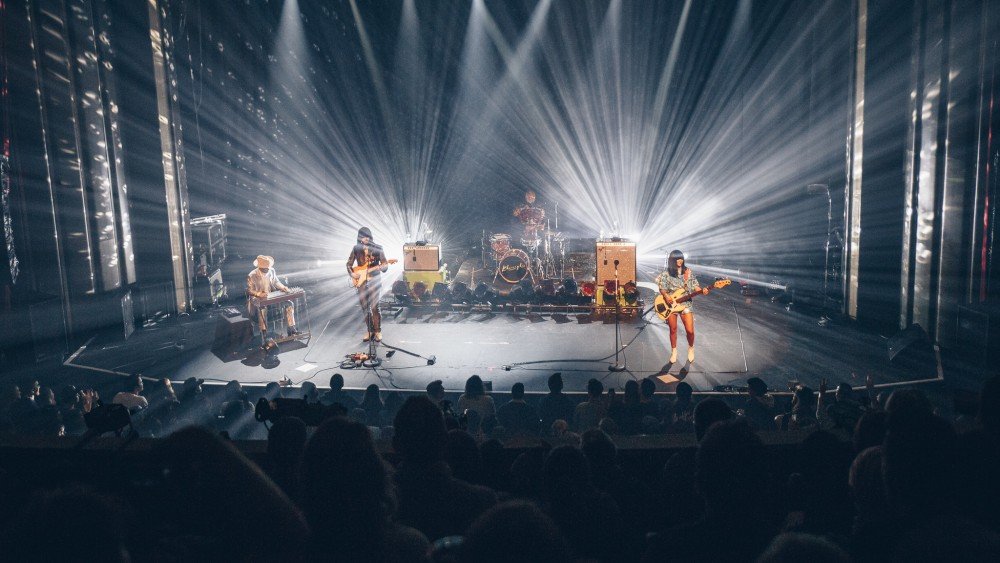 What better way to finish a weekend off than a night of funky dance vibes. Khruangbin are no stranger to the city of Vancouver. In fact, this was their third time in 2018 alone playing here; first selling out a headline show at the Rickshaw Theatre in April, then opening for Leon Bridges at the PNE amphitheatre in September and now headlining and selling out the Vogue Theatre. This majestic Texan trio are full of wonders and have kept their background and image fairly illusive.

Opening up the show were steel guitar band Will Van Horn who covered a spectrum of genres and covers. The instrumentation started off slow as each member closed their eyes and concentrated on the melodies, keeping perfectly in time with one another. The band are also from Texas and close friends of Khruangbin, with steel guitar player Will featuring on all their records. The set grew more lively as it went on with a cover of Aphex Twin’s 1995 track ‘Alberto Balsalm’ whereby drummer ‘Tank’ chimed his drumsticks lightly on the cymbals. As their set came to a close, it was time to get the fully packed Vogue Theatre energized with a cover of ‘Toxic’ by Britney Spears which had the crowd singing along to the high pitched sliding steel.

In true mysterious fashion, Khruangbin came on stage and opened with a hidden track, ‘Bin Bin‘. The song can only be found on the vinyl version of ‘The Universe Smiles Upon You’ after the fixed grooves and had everyone boogieing to its funky 70’s style jive before guitarist Mark Speer let out a short shred. The wigged guitar god is renowned for his extremely dynamic style of playing, whether it be blues, psychedelic rock, pop, salsa and everything in between, this guy will make you nod your head. As for the backbeat, drummer Donald Johnson aka DJ, has it on lock down with his hip hop style rhythms that are repeated throughout. Last but certainly not least in the trio is bassist Laura Lee, laying down the jazzy bass lines and rocked white leather boots, a retro red dress, silver glitter lipstick and of course, signature black wig.

Most of the time Khruangbin are fully instrumental with very little vocal harmonies or short phrases provided by each member. When it came to playing their track ‘Evan Finds The Third Room‘ taken from their latest release ‘Con Todo El Mundo’, the whole crowd joined in shouting “YES” without missing a beat. Two large disco-balls were blasted with light making the entire room sparkling like snowflakes as people danced to the contagious beat. This seemed like the end of the show but it was only just warming up. The setlist was then flipped on its head with a medley of covers, featuring Hip hop classics such as Ice Cube’s ‘It Was A Good Day’ to rockabilly Chris Isaak’s ‘Wicked Game’. There was clearly no excuse not to be smiling and dancing to one of the familiar old school classics they pulled off so well.

The lights went out and the audience erupted with applause wanting the members to come back. Khruangbin took to the stage once more only this time with an extra member, Will Van Horn and his steel guitar setup. One of their more mellow songs ‘White Gloves’ was played which had the whole band harmonizing and singing the lyrics softly. Unfortunately the good times had to end but not without one last uplifting tune, ‘People Everywhere (Still Alive)’. This band are truly unique in what they do and I personally hope to see them roll through Canadian soil several more times in the new year!