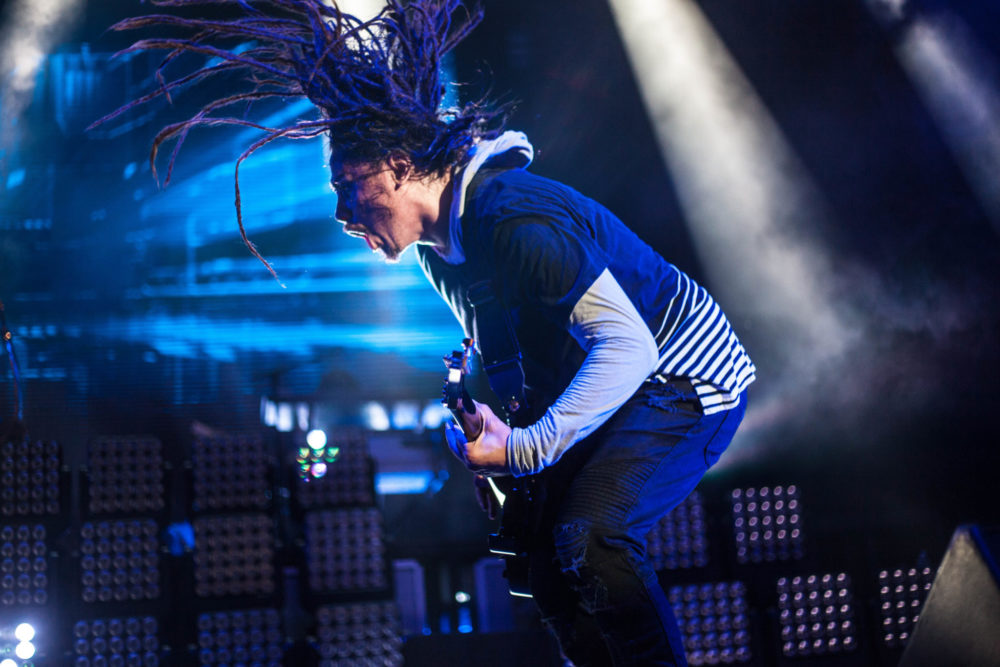 It’s been a hefty, idiosyncratic, creepy, and all around triumphant 22 years since the inception of Bakersfield’s own and everyone’s favourite nu-metal band Korn. It’s been an even longer and equally (if not more) creepy and odd 31 years for Rob Zombie. In those accumulated years, both bands have put on shows in dozens of countries and hundreds of cities all around the globe. This time around, they happened to stop in Southern California, and I had the arrant pleasure of attending a legendary show at a legendary venue. It will ultimately be the last time either band will step foot on that stage as well, as the amphitheatre is set to be demolished soon. I believe that made the concert all the more memorable.

If anyone out there is familiar with Rob Zombie’s films before his music, then his live performance will not pose much of a difference to you. Following his horror-laden atmosphere and interests, a Rob Zombie show is an experience in itself. Fully equipped with props of giant heads that looked like something out of an El Superbeasto and Nosferatu mash-up placed all over the stage, and 3 giant screens displaying scenes of naked dancing noir women, snippets of old 1920’s and ’30’s monster flicks, and practically just everything horror associated. Mr. Zombie truly is no stranger to the obscene. He made it absolutely impossible to not become lost in some strange and perfectly constructed X-rated fantasy land. The band played a cohesive collection of songs from all over the map, ranging from old Rob Zombie to new Rob Zombie, and even a couple White Zombie songs from the early days. Among the showcased songs were classics like ‘Living Dead Girl’ and ‘Never Gonna Stop’, and of course what would a Zombie show be without an appearance by ‘Dragula’? New tracks like ‘In the Age of the Consecrated Vampire We All Get High’, and ‘The Hideous Exhibitions of a Dedicated Gore Whore’ were also played into the crowd’s eager eardrums. Before closing out their utterly badass set, the band assured they still had some tricks up their sleeve. They did a Star-Spangled Banner cover (because why not?), where John 5, the bands lead guitarist, played the entirety of the song with his pearly whites. I had never seen anything quite like that. Just before ‘Dragula’ was set to ensue, a massive podium reigning probably about 12 feet tall was wheeled out for Mr. Zombie to look out over his sea of minions.

I feel as if no words can truly do Korn’s performance that night any justice. I had last seen Korn a couple years prior at 2014’s Rockstar Energy Mayhem Festival, and even then I was blown away by the band’s energy and accuracy to detail. Of course, that was from a lawn perched upon a hilltop, where I could barely catch a glimpse of anything worth seeing, but now the stakes had changed – now I was settled in right beside the stage, close enough to see Jonathan Davis’ eyebrow piercing. The headliners kicked off the late night with ‘Right Now’, ensuring that no one was going to be prone to catching some z’s. Metal horns shot up after every song, a salute to the band that they were giving about 16,000 patrons the time of their lives. It seemed as though the setlist for this show was crafted by the most dedicated Korn fan, as the songs ranged from released 2 decades ago to released a week ago. Classic Korn tunes like ‘Somebody Someone’, ‘Coming Undone’, ‘Blind’, ‘Got the Life’, ‘Falling Away from Me’, and, of course ‘Freak on a Leash’ were all among the acclaimed songs played for an amphitheatre full of people hungry for copious amounts of Korn. Mid-set, the band played their eerie rendition of Chutes (Shoots) and Ladders, and what followed seamlessly after was something that surprised most fans – they covered the latter part of Metallica’s ‘One’, and for only being a small fragment of the song, I have to say it was extremely well done. During ‘Blind’, Jonathan Davis let some children from beside the stage run amok and go wild on the main stage, creating a sort of demented playground, something that isn’t uncommonly associated with a band like Korn. They wrapped things up with ‘Freak on a Leash’, giving the audience one last dose. And oh, how freaky it was.

I was asked the other day what the best concert I’ve ever been to was. Reflecting back on this one, I feel I can most certainly reward it with that title. Return of the Dreads Tour was a massive success, and if you will be remotely near any of the last few stops of this tour, I highly advise you to go and experience first-hand what the power of two genre defining metal bands can do. Thanks for checking out my coverage as always! Leave a comment or two!