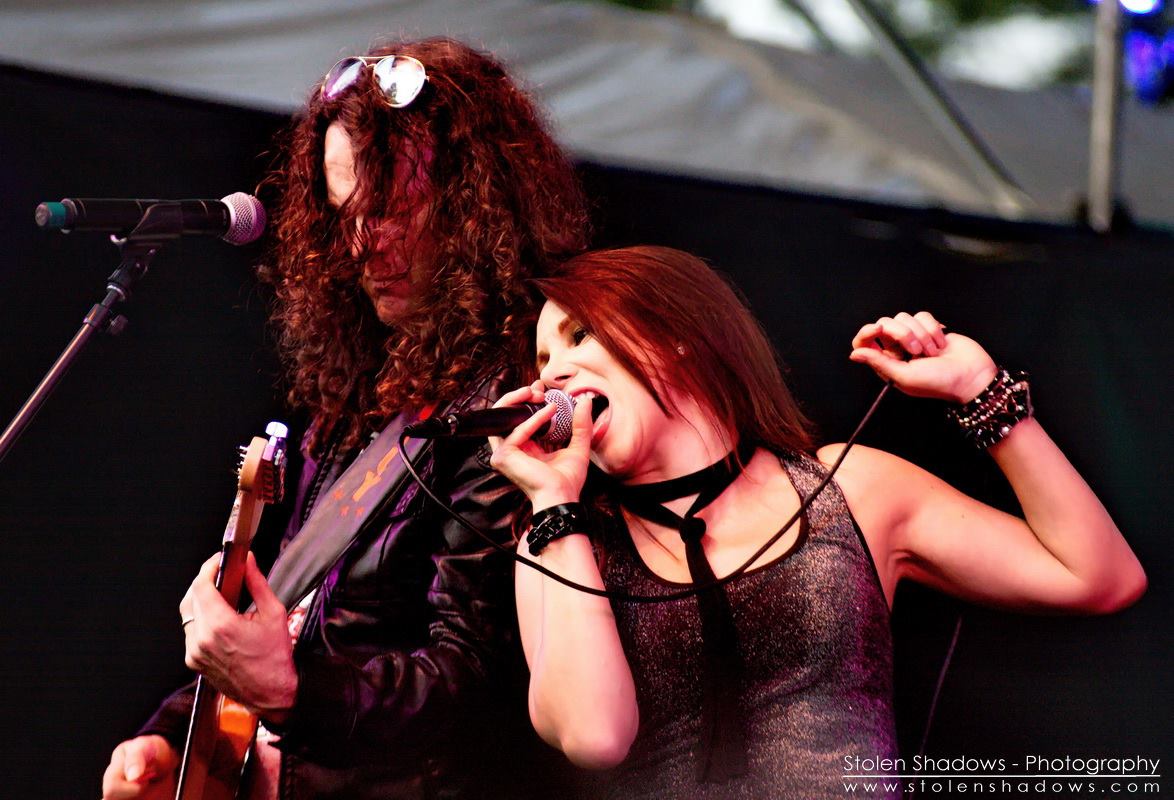 She launched onto the iridescent Chevrolet Performance Stage in her signature pink jacket with that powerful, dynamic vocal range and radiant stage presence as if this were Wembley ’86. Of course I’m talking about Canada’s very own rock royalty, the incomparable Lee Aaron.

The thunderous swagger of John Cody’s drumming coupled with the groovy shred of Sean Kelly’s opening guitar licks ushered the crowd into an evening of unforgettable entertainment. Lee Aaron and company kicked off this outstanding outdoor concert with their smokin’ rendition of the Montrose classic “Rock Candy”, a stand-out cover from Lee’s highly influential “Bodyrock” album, which included some amusing push-and-pull (literally) between Lee and bassist Dave Reimer. I’m hesitant to refer to guitarist Daniel Sveinson as the newcomer (this is only his 3rd gig with Aaron) as he fits in so seamlessly with the rest of his bandmates and the joyful bounce he exhibits on stage is the perfect counterbalance to Kelly’s guitar-god stature. The team effortlessly blasted into the hits starting with a soaring performance of “Hands On” energetically played as though it were written just yesterday. Cleary this is a band with a ton of chemistry.

That’s great news as Lee Aaron along with these amazing musicians make up the incredible talent putting their finishing touches on her NEW ROCK ALBUM! The congregation that night was even treated to a generous road-testing of some of her new material and I, for one, felt that the new songs surpassed my already pretty high expectations and are well worth the wait–a revelation of things to come! It’s safe to say that the rest of Lee Aaron’s spectators were equally blown away as the masses response was simply electric.

“Handcuffed to a Fence in Mississippi” had some great impromptu scat-singing from Lee with a little back-and-fourth audience participation thrown in for good measure during the outro. Lee Aaron’s voice on it’s own proves that she is at the top of her game, but she also instinctively knows her way around a guitar and her sweet talk between numbers made for a very welcome and refreshing connection between Lee and her listeners (new artists could learn a lot from this.) When Lee announced the next song as being one they recently put back into their setlist, an audience member yelled out “Whatcha Do to My Body!!” To which Ms. Aaron replied with that trademark sarcastic wit, “Yeah, I dropped my biggest Top 40 hit from our setlist… C’mon! Get that guy, will ya?” Canada’s Metal Queen continued her emotional reign with “Baby Go Round” followed by a dedication of “Some Girls Do” to two of her younger fans in attendance that night (my daughter’s, truth be told.) Lee has honed that rare ability to engage her entire audience and certainly knows how to charm even the very last person at the back of the furthest stand… and dear pop princesses of the world: please make sure that you actually know how to sing (and it wouldn’t hurt to know how to play an instrument or two!)

The band wrapped up their stellar appearance as part of this year’s Mosaic Music Series at the PNE with a one-two punch of “Metal Queen” followed by “Whatcha Do to My Body”, a song that not only intensified national recognition for Lee Aaron’s craft, but also helped to catapult MuchMusic with her iconic music video as well as heighten appreciation for Canadian music everywhere. It’s undeniable that Lee Aaron captivated a very appreciative audience last Sunday night and continues to have the masses eating right out of the palm of her hand. To top things off, she even took the time to meet and greet some of her loyal following after the show, sign a few quick autographs and pose for some fantastic pictures. This level of genuine fan-appreciation is practically unseen these days–what a classy lady! There is no question that Lee Aaron sincerely appreciates her fanbase and has no doubt worked very hard to earn her well-deserved place in the music industry.

A friend of mine shared a story with me recently about how when he lived in Thunder Bay, Lee was a local singer who had some musical friends of his at the time in her band. “Guys… we’re moving to Toronto and I know we’re gonna make it… come on!” They said NO and all decided to stay with their jobs at the paper mill. She left solo and became a star. They stayed and the mill closed.

Lee Aaron may have come a long way to get to this point in her career but she obviously has a long way to go, yet… and if you’d ask me if I’d like to see this slick chick play the Commodore Ballroom in support of her upcoming album? Baby ya know I’d love to.