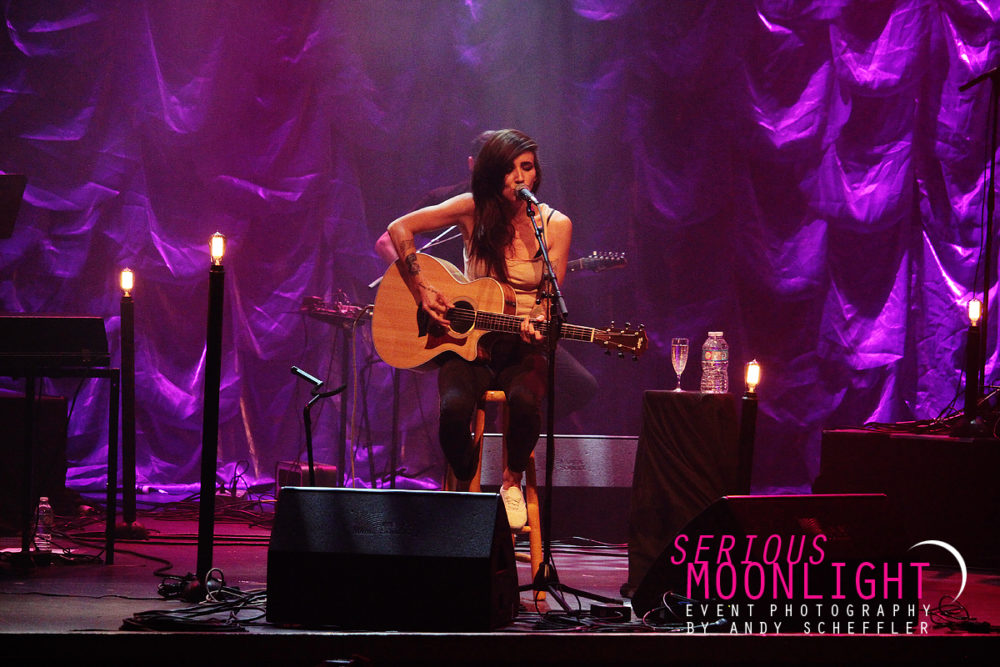 Lights put on a super chill show last night at the Vogue in Vancouver. The set started off with Lights solo, perched cross-legged on a stool, playing acoustic guitar under a pair of purple spotlights, between ‘goalposts’ of warm, orange antique bulbs atop short posts. As the set continued and more musicians joined her on stage, the lighting slowly ebbed, revealing a gathered, shimmery curtain behind a drummer, three strings, a guitarist and a keyboard player. More and more of the antique bulbs popped up from time to time as well. It was a gorgeous stage set-up. After two songs, Lights greeted the enthusiastic crowd, politely seated in an assigned-ticket room tonight. She has a really easygoing nature about her, even through her declarations of nervousness or messing things up. She just seems completely at ease at the front of a room, with no need to rely on showiness to engage the crowd. It was a very living room concert atmosphere. She asked everyone how they were doing, then stated that she was going to, “throw the fuck back,” to an older song. “If you know the words, sing a long. If not… make out.” She then played her song “February Air.”

On a typical day, Lights’ music is much more plugged in than it was presented at this show. Certainly she has matured as a songwriter over the years, with her earlier keytar-laden, spritely pop growing into more layered instrumentation (while still being poppy and danceable… though the keytar has been abandoned for a regular keyboard) and singer-songwriter tunes. She addressed this at the show, talking about how it was the last night of the tour, playing songs ranging from two to ten years old, and how pleased she is to be able to still play even the old songs, “in a way that feels new to me,” but went on to state that she has butterflies every night because it’s like she’s playing entirely new songs. The format allowed her to really use her incredible voice and show off what a great, intense range she truly has. Sometimes in her recorded work, that voice can take a back seat to the boisterous music, but man, when stripped down, this chick can wail! Before playing “Don’t Go Home Without Me,” she put down her guitar and picked up the wine glass that had been sitting on a small, black-cloth-clad table beside her. “I get to hold a drink the entire time. This is a rare occasion!” Folks in the crowd are going nuts, cheering her on when she kicks the voice into high gear.

She told us a story about someone who hollers a lot at her shows, who is at a lot of shows, and always requests a certain song, but she never plays it. “Tonight I decided to follow through. It’s gonna knock your tits off. No seriously, I might really fuck this up. Sing along, please… knock my tits off.” She sang “Saviour” then, one of the songs from her album The Listening, released in 2009. This is some of the older, synth-heavy, autotuned early songs that I suppose she is maybe trying to distance herself from to a degree, but here she turned it into quite a lovely ballad. “If I would have known then that this is where I would end up, I would have burned that headband, smashed the keytar, kicked those spaceboots away… it took a long time to find this version.” The old songs were still very personal to her, but she took a real roundabout road to get them to a point that match where she’s ended up in life it seems. Anyhow, enthusiastic room that ate up everything she did, sang along to every tune.