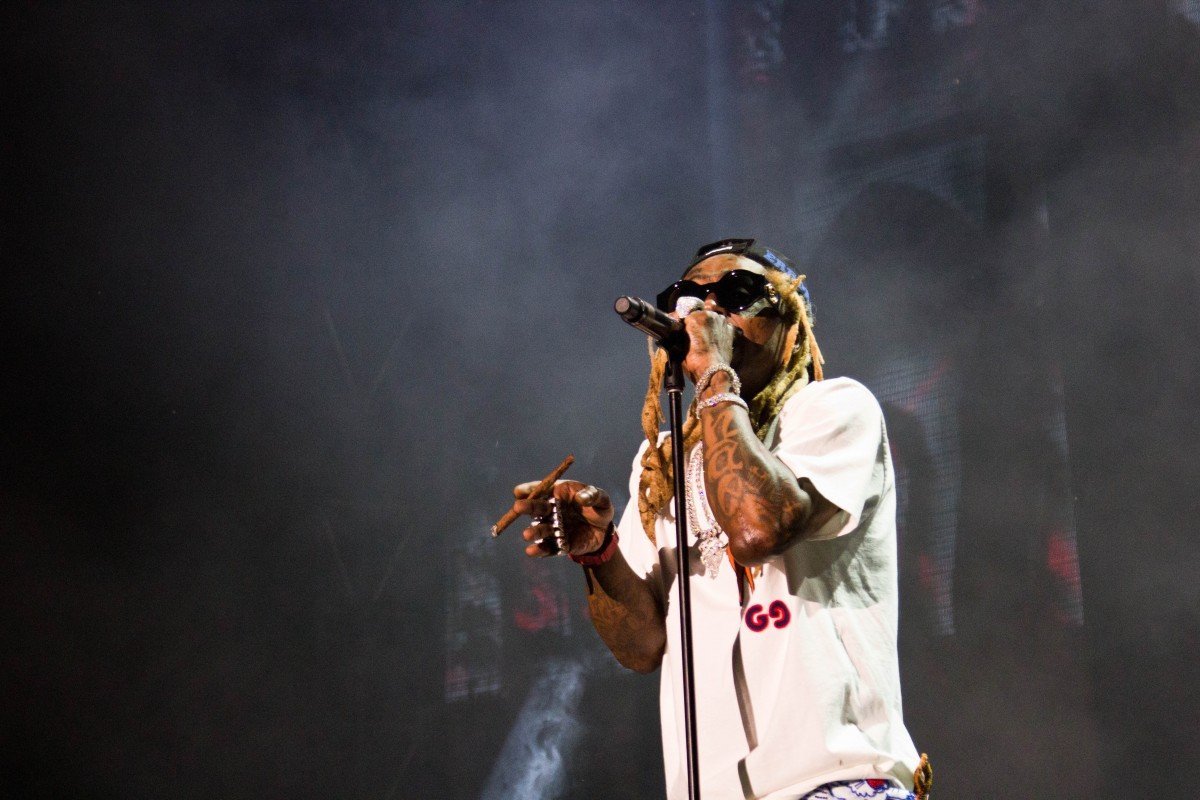 There’s a special music festival held every year in New Orleans. Grammy award-winning artist Dwayne Carter, also known as Lil Wayne, hosts his annual Weezyana Festival in his hometown of New Orleans, Louisiana. Each year it gets bigger and better & this year did not disappoint. September 7th it was held at the University of New Orleans Lakefront Arena festival grounds and the lineup features hip hop’s heavyweights like Travis Scott, Meek Mill, Meg Thee Stallion and more. This year features carnival rides, food from local restaurants, and various games as well. With the festival usually being outdoors, the temperature played a huge role with the weather well over 90 degrees during that day. When walking into the festival grounds. You were welcomed by a huge “Welcome to Weezyana Fest” and the information tent and everything else from the radio station tent to food trucks, water and liquor tents was in walking distance. Walking further into the grounds are the different seating arrangements.

People that purchased the rear ga ticket were located all the way towards the end of the grounds. The pit ga ticket didn’t have any special access but that had its own section & you’re closer to the stage. Vip had their own section with an elevated platform or a VIP pit to get the chance to see your favorite artist up close. Hydration was somewhat available throughout the festival and when the middle of the day came around. That’s when the heat increased and a lot of people were passing out of dehydration.

The gates opened at 2:30 pm & most of the acts were smaller tier artists. Popular Atlanta artist Akbar starting the festival with songs that people sung word for word and her being on the popular reality TV show Love & Hip Hop. It has helped her brand a lot especially with her music career. Most of the sets ranged from 15 minutes to 45 minutes. Up and coming singer Leven Kali was next up to grace the stage and his set wasn’t bad. He had a live band which was really great and the crowd had a warm response from him. His set was more chill which helps because the rest of the night will be a lot of hip hop acts with a little bit of R&B. The female artists impact was truly made in this festival.

The next act was supposed to be Melli but she couldn’t make so the wait was around 30 minutes for the next artist to perform which was Kash Doll. Hailing from Detroit, her presence was something to see as soon as she stepped on the stage. She really zoomed through her set with songs she performed on her mixtape and she ended with the hit single called “Ice Me Out”. A lot of her female fans woke up as soon you heard her say “I am looking for someone to ice me out”. Once she was done, Saweetie was up next and her set has mixed reviews. Her set lasted about 10 minutes or so and before she went into her last song called Icy. She asked the crowd “who wants a icy girl chain?” The crowd went crazy and of course everyone female wanted one. She picked someone out and threw it to her.

Next up is one of Houston’s very own Megan Thee Stallion. With the hard pushing lyrics and the sexual content that she raps about, her fans fell in love with her as soon as she came out. She came with the term “hot girl summer” and “drive the boat” as a term for females to do what ever they want to do on their own terms and live their best life regardless of what anyone has to say. She demands everybody presence when she’s come on that stage and that she did. Ending her set with one of the biggest songs “Big Ol Freak. Everyone in that crowd was feeding her great energy and Megan gave that same energy back.

Up next is Trey Songz, a veteran in the music industry and has been consistent throughout his career, this was his first appearance at the Weezyana fest. No introduction or anything, he straight into his with the live band & started with his old single called “I can’t wait”. Just seeing an artist at his caliber and can play his old or new songs with the crowd singing as loud as they can, even he was shocked at times. He went through each songs & didn’t stop. Once he was done, he ended with a “New Orleans, I love y’all” then exit the stage.

Meek Mill representing Philadelphia, Pa was an experience and this show meant a little more to him. His label Dreamchasers, he has different artists signed to his label but of them was a New Orleans native named Lil Snupe. He was going to be the next biggest act to come out of New Orleans. He was gunned down at an apartment outside of New Orleans and in all of his sets, he never forgets the artists that paved the way for him and also remembers the ones that we lost also. His set was high energy from start to finish. Ending his set with one of his biggest songs called Dreams & Nightmares. It’s like an anthem you play for overcoming any negative odds and just let people you’re here to make a statement.

One hip hop biggest artists were Travis Scott. Representing Houston, Texas his shows are one of the craziest experiences you’ll have. When he came out, people were climbing the barricade and trying to move their way up up to the front to get a photo of him. Off the top he started with the song “Stargazing” & with the pyro, it brought his set over the top. The show got so crazy, he had to stop ask the crowd “if you’re good put a thumb up”. He ended with the one of the biggest songs “Sicko Mode”.

Now that the other artists are done with their set, it’s time for the closer. The man behind the festival Lil Wayne was the act that everybody was waiting for all day. He started with his old songs featuring his live band then he did his introduction. He thanked everyone for coming out then he resumed to his classic songs. His set was about 1 hour & 10 minutes. He’s one of those artists that you should see live regardless of what location he’s in. He is one of the best artists of our generation. Him giving back to his hometown for his annual festival is always something great that the city loves & it gets bigger every year.