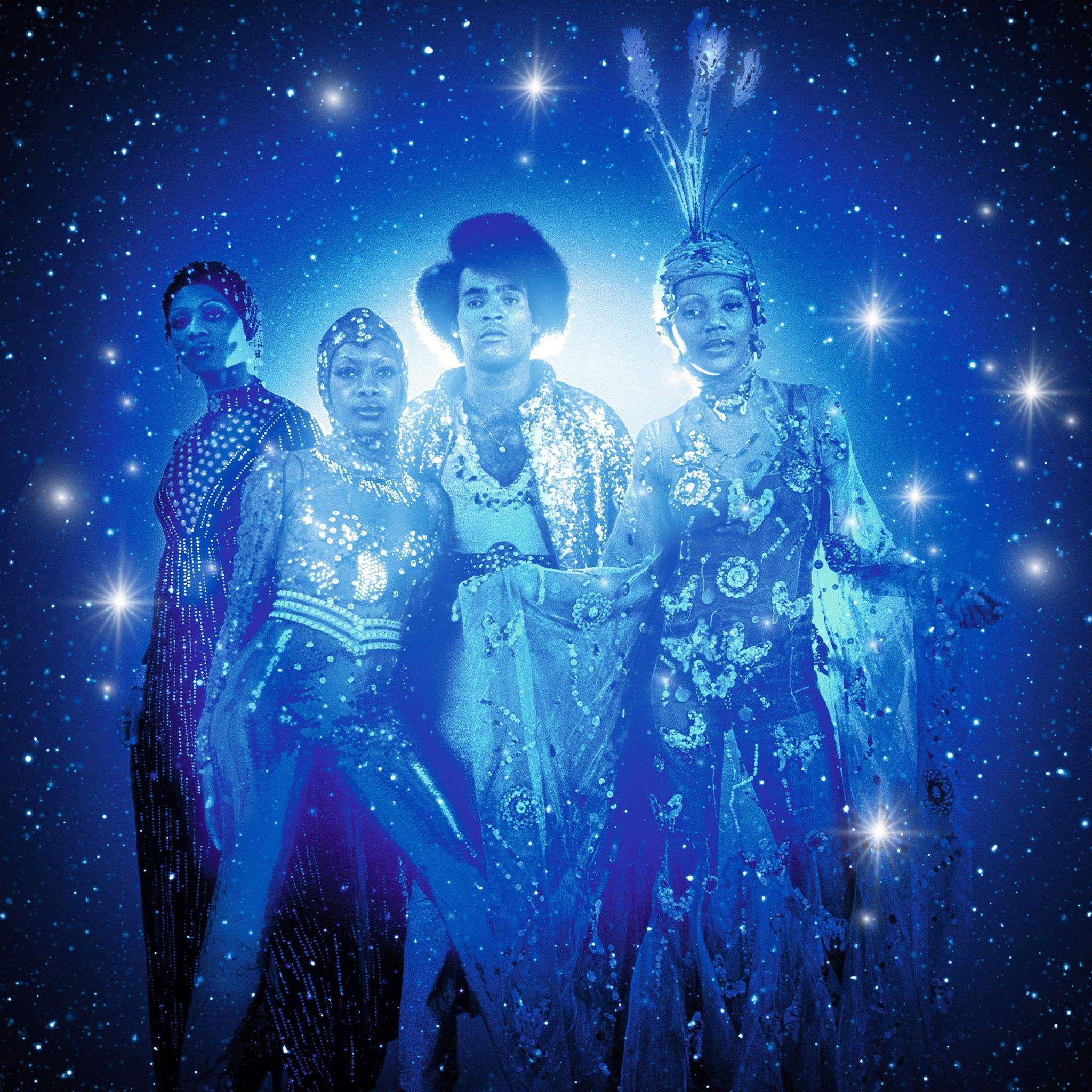 If was asked a couple of weeks ago to pick one album out of my record collection that I thought I would never see live, that probably would have been Boney M. This is not, of course, because I wouldn’t want to or because they aren’t absolutely fabulous, but simply because I had no idea that this possibility was still on the table! I had resigned myself to the fact that these disco idols were confined to the etched grooves of my vintage vinyl and nothing more. You can imagine my delight when the opportunity arose to live out my 70s fantasy live at Vancouver’s Vogue Theatre last Sunday. While it wasn’t, of course, the whole original line-up, the prominent voice of the group, Liz Mitchell, backed by an extensive band brought the songs we know and love from her heyday to a thrilled audience this holiday season.

Thinking about the body of work of Boney M often left me with more questions than I had answers. Questions like: Are these songs aligned with Rastafarianism or Christianity? What interest does a Caribbean disco ensemble have in singing about the troubles in Northern Ireland and a 19th Century Russian mystic? and What exactly is a Steppenwolf? For answers, you would probably have to go to German producer Frank Farian who orchestrated the band and wrote their original songs. As is the way of disco, a lot of them are covers plucked from here and there, leaving us with the ranging collection we have grown to love as fans. There is something about them, perhaps this particular brand of off-kilterness, that continues to appeal and has allowed Boney M to outlive the death of disco. Its ability to bridge the generational gap was apparent at the Vogue show, with older fans from the glory days sharing the evening with their kids, and a fair few groups of millennials and zoomers venturing in unprompted. This music is, simply put, universally loved and has transcended its era–it’s timeless.

The house was fitted with seats in the venue, which were quickly filled by a punctual crowd chattering excitedly about what song they thought they would open with, whether would they play all Christmas songs, and whether there would be a supporting act. “No one opens for Boney M,” I heard someone say, “They’re just too iconic!” Audience members swapped stories of first hearing these records as little kids, or how they used to dance to them in the discotheque–the house was brimming with nostalgia! After half an hour’s delay that the oldsters didn’t seem to appreciate, anticipation was bubbling over when finally a jazz ensemble assembled on the stage, a small orchestra consisting of sax, trumpet, guitar, bass, keys, and two drummers. They fired up an ambient tune as a man in a neat suit came out and took the mic, with the sole purpose of introducing the evening’s leading lady. Ms. Mitchell is a classy gal, she can’t be waltzing on stage without her hype man.

Three young backup singers in gleaming sparkly attire filed onto the stage followed by Liz herself. She beamed with joy to be out on the stage doing what she loves but was moved to begin on a solemn and stripped-back note, singing a slow tempo spiritual “I’m Born Again”, a nod to her identity as a born-again Christian. This being her first tour back after covid, Mitchell opened up about her experience during the pandemic, relating the feeling of confusion to which we can all relate. Keeping things sombre, she dedicated her next acapella song to loved ones on the other side, singing out, “I’ll meet you in the morning” with beauty and grace.

“But we are here and we’re going to have some fun tonight,” she proclaimed, preparing to heighten the mood. “We brought the sunshine.” The audience went wild as the band launched into dancefloor staple “Sunny” and bounced to the happy beat. Liz not being one to hog the spotlight, each of the three fabulous backup singers took a turn to lead the tune. “I know this is a seated concert,” Mitchell declared, “but you can get up and dance! I won’t mind!” As the opening bars to “Daddy Cool” kicked it, everyone shot to their feet to groove and clap along. Liz exuded joy, connecting and playing with people in the front row.

The party really got cooking when the young man, serving as a surrogate for original band member Bobby Farrell, belted out the deep and gravelly male vocals to propel “Ma Baker” along. The similarity between him and Farrell was uncanny in that he was definitely a stronger dancer than he was a singer, and in that he was clearly there primarily to provide flair, eye candy and comic relief in equal measure. Halfway through the song he, near-imperceptibly fast, popped his shirt off getting quite a rise out of the audience and raising pulses, only to wear an open silver vest the rest of the night. Throughout the evening he would grab audience members’ outstretched phones as they recorded videos and help himself to a selfie form up on the stage. The hits kept on coming with the reggae-calypso rhythms of “Holiday” and “Brown Girl in the Ring”, one of their tunes with mysterious originals, namely adapted from a Jamaican traditional children’s song. Mitchell coaxed everyone to belt out the chorus and shake their bums to the island vibes.

After the bit of revelry, Mitchell invited the audience to sit back down coming into the Christmas song section of the night to a huge cheer. “Maryyyy,” someone shouted from the crowd. Mitchell took care to acknowledge just how popular the Christmas album is with us Canadians, a fact she was quite unaware of until many years after its release. “I had no idea how much it meant to you all,” she expressed with honour, humility and gratitude, launching into a stream of Christmas classics to get everyone in the holiday spirit. The beautiful harmonies of “Zion’s Daughter” shone and the reggae funkification of “White Christmas” brought the fun. But of course, the crown jewel was “Mary’s Boychild” forever a classic lodged deep in our hearts. I don’t know how Christmas with Boney M came to be so darn pervasive here, but my life is better for it.

As the night began to wind down, one of the backup singers got everyone in the room to hum in the intro to “Rivers of Babylon”, which winded on into a true jazz jam where each and every person on stage had a chance to solo. The vocalists put their hearts and souls into their feature moments and the instrumentalists culminated with a fierce percussion solo by the female black drummer on the kit (not something you see all that often). To the Babylon grooves, the singers danced and shuffled their way off stage, but were beckoned back on by that all too familiar beat pattern on the toms that meant “Rasputin” was on its way. The band gave it their all the audience gave it right back, singing along and jumping up and down. Mitchell looked on delightedly as some people in the front of the room produced some old vinyl records which she promptly signed for them in the denouement of the song, and when there were no more records she started signing people’s forearms in true rockstar fashion. She seemed to be truly enjoying connecting with strangers as well as friends and family in the audience.

For the final song of the night, Mitchell invited all the children in the room to come up on stage as they played us out with a rousing rendition of “Feliz Navidad”. It started with just two little kids, but slowly some teens and preteens filtered their way up, loving being up with the band. Little by little the defences came down and suddenly everyone who felt like it started hopping up on stage and dancing to their heart’s content until the stage suddenly looked like a Where’s Waldo picture. You could hardly see the band members anymore sprinkled in and amongst maybe 50 concertgoers as they belted carolled away, and the singers disappeared into the crowd and slipped off stage. What a fitting ending to such a joyous show, bringing everyone from different backgrounds there that night together, united in song, just the way Boney M’s music has always done.