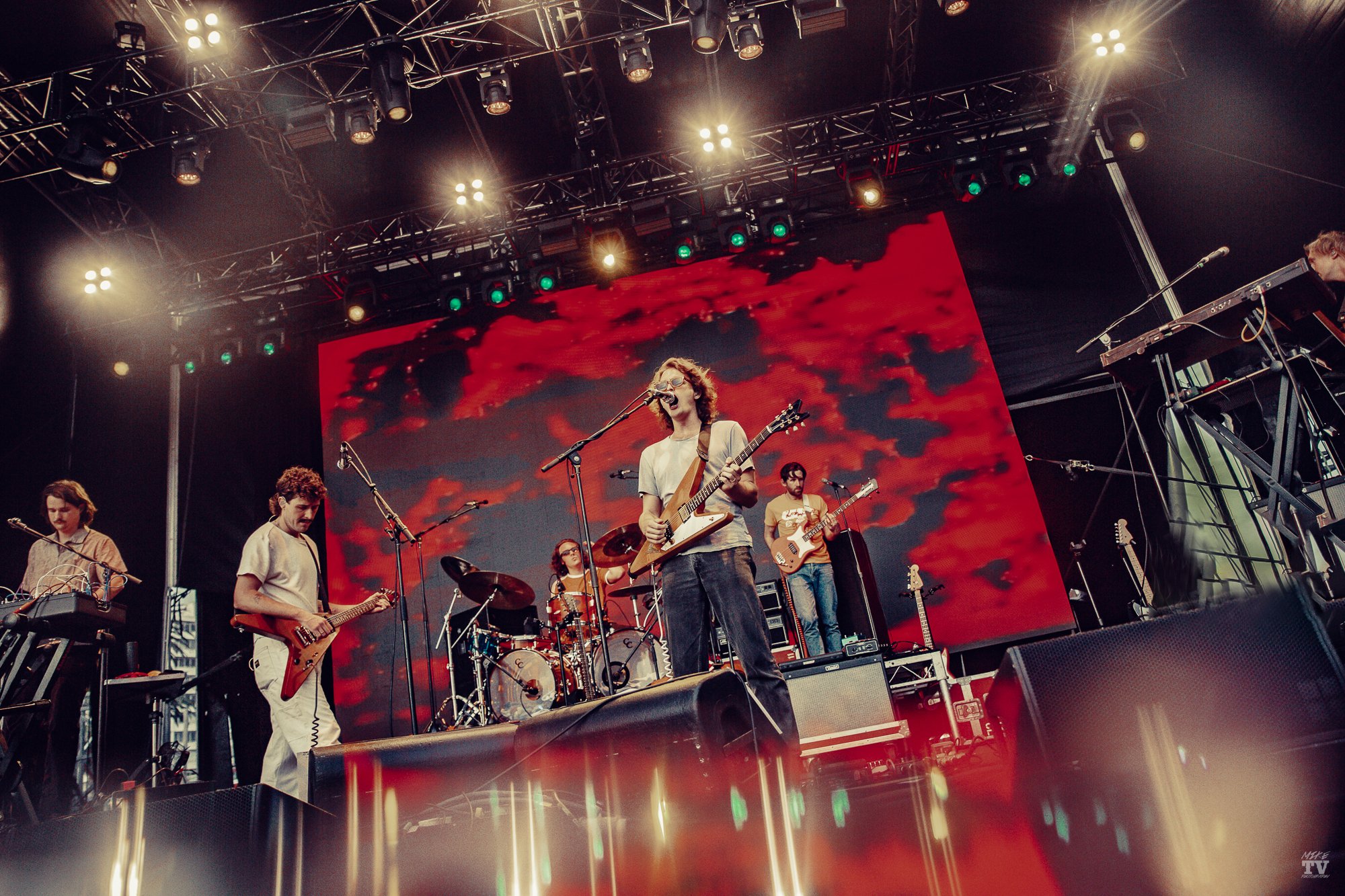 A lot can happen in 66 days. The European Journal of Social Psychology published a study finding that 66 days is the precise amount it can take to form new habits, good or bad.

Famously, the first flight of European pilgrims to the Americas, aboard the Mayflower ship embarked on an epic ocean voyage of discovery and resettlement in this amount of time.

Fast forward 402 years to 2022 – and it’s been 66 days since Concert Addict’s last report of King Gizzard and the Lizard Wizard live in concert, in which time the prolific Melburnian musical machine has released three entire studio albums and I for one have formed a habit of compulsively listening to the output of this incredible, experimental, psychedelic, boogie, metal, every genre band, around the clock.

Acting as a welcome home celebration show in a way, the first since the release of Made in Timeland, which kicked off a run of five records released in 2022, (followed by Omnium Gatherum, ‘Ice, Death, Planets, Lungs, Mushrooms and Lava’, Laminated Denim, and most recently Changes) it’s unlikely any other band on the planet has been as creative, ambitious and energised as King Gizzard this year. The band’s remarkable imagination and increasingly grand projects were demonstrated with full force at their performance in St. Kilda’s freshly debuted, open-air music venue The Palace Foreshore, with the band arguably in the thick of their ‘jam band era’ now.

Flanked by palm trees, the majestic Palais Theatre next door and the revelers of Luna Park, with a calming ocean breeze in the air the Palace Foreshore welcomed all, some of whom traveled to the city from around the vast country to unite and celebrate the triumphant return of the local legends and take in much of what St Kilda offered, not least of all, the cheerful Gizzverse Record Fair, hosted at St Kilda Sports Club earlier in the day, offering up true gems for the taking to any and all vinyl and memorabilia lovers.

Civic, the furious and confident punk quintet, also from Melbourne opened the evening with a mercilessly tight, if abrasive set of hard rock & roll. With an adventurous rhythm section, the band were able to titillate most of those holding down precious space in the front rows, with suitably summery tunes, perfectly at home with a looming sunset overhead.

Whilst performing songs evocative of the melodicism of The Bronx and Fucked Up, the band carry themselves with a London punk scene swagger and charm.

Stella Donnelly, next to take the stage is an artist unafraid and unashamed to wear notions of endearing honesty and self doubt on her sleeve. With two sublime albums and a beloved EP under her belt, her performance played perfectly to the time and the place; not just the dusky beach on a balmy weekend, but that of questioning traditions and societal gender imbalance.

This was not least communicated in her scorching song “Old Man”.

Whilst at once carrying a uniquely poetic voice, there is a delightful whimsy to her lyrical rumination that is very much in the spirit of Courtney Barnett, a treat to hear in a live setting, accompanied by a full band, adding a dimension of rock and roll to an otherwise ethereal, delicate yet imaginative sound.

With a fever pitch atmosphere hovering in the air, likely incensed by the appearance of members of the band during their line check between sets, it was fertile ground for some energetic music.

With the bands most recent output firmly lying in the roots of jam band inspiration, the fact that King Gizzard took the stage and launched headfirst into approximately 30 minutes of the most intense cuts from their monolithic archive was a welcome surprise. Not only this, but judging from the cyclonic mosh pits and comments from veteran fans, those select songs were played with a level of newfound ferocity as well as trademark precision.

Hardcore fan favourite “Crumbling Castle” was effortlessly segued into “The Fourth Colour”, a showcase for Michael ‘Cavs’ Cavanagh’s jaw-dropping percussion talents, who performed a brief but rousing drum solo before literally upping the ante and tearing through some of the bands heaviest songs to date, leaving the crowd breathless.

Shredding solos were traded off between co-leads Joey Walker and vocalist/guitarist Stu Mackenzie, textured by the impassioned rhythmic guitar playing of Cook Craig; with whom heavy thrash metal cuts from Infest The Rat’s Nest and Omnium Gatherum get performed with a distinctly King Gizzard psychedelia all the same, through “Planet B” and “Predator X”.

Unofficial seventh band member, visual artist Jason Galea’s nauseating visuals were, on that stage, brighter than ever, pulling the viewer into a furious vortex deeply syncopated with the music, vividly recreating a passage through the seven layers of hell, none more so than on ‘Rat’s Nest epic “Hell”.

Following up this rollicking sequence of music was equally an mind bending spin through “The Grim Reaper”, featuring multi-instrumentalist Ambrose ‘Amby’ Kenny-Smith on lead vocals and Stu gracefully performing lead flute; in typical fashion, waved overhead between passages like a demented band leader.

Ambrose, in the spotlight owned the stage, spitting twisted rap lines on the omnipresent threat of Death (or a murderous gangster, depending on your interpretation), his rhymes are juxtaposed with haunting flutes riffs permeating the air.

In typical fashion, the band found themselves unable to contain themselves from morphing the largely hip-hop based sound into a synth rave jam, taking in hints of the song “Sadie Sorceress” with a consistently analogous purity, whilst Amby cackled demonically behind a climactic synth wave crescendo.

In somewhat of a breather, the steady beat of “Hypertension”, from recent release Laminated Denim, held a sense of suspension as it meandered through true jam band territory, taking in atmospheric views of multiple dimensions and textures, visually and lyrically. The truly epic song somehow managed to find it’s way back to a place of incredible volume and intensity upon it’s euphoric conclusion, a feeling made in part by the incredible precision of their playing, showcasing a group of tight knit musicians able to change gear in an instant.

A visit was then paid to fellow October 2022 release Ice, Death, Planets, Lungs, Mushrooms and Lava with the achingly cool “Ice V” and then “Iron Lung”, the latter a further showcase of Kenny-Smith’s multiple musical talents, taking on saxophone and scorching lead vocals again, after a dazzling instrumental mid-section. “Iron Lung” was performed accompanied by a horrifying visual realisation of the album’s artwork. However it is “Magma” that takes the place of one of the hardest hitting jams of the evening, this song an opportunity for Mackenzie and Walker to establish themselves as bonafide guitar heroes; the former hoisting his flying v guitar above and behind his head at every opportunity.

Ahead of the bands closer played a mysterious short jam as the band found their steam. Familiar motifs were uttered, ushering a guessing game in the crowd of where it might be leading. Ultimately in the suspense, “Float Along – Fill Your Lungs” became a full bodied sonic picture, capturing the imaginations all the way to the back of the venues grounds, inhabited by dancing, grooving, chilling Gizzheads (the unofficial name of the fan community).

Amidst a menacing mid-section of the enthralling song, Joey introduced chugging guitar riffs, essentially hinting towards an Ouroborus-like reprise to the start of the whirlwind set, with synth layers building and building to an overwhelming, orchestral conclusion.

King Gizzard and the Lizard Wizard will visit New Zealand for shows later this month, with dates lined up in Europe, Australia and a US residency tour in 2023.

Review and by Michael Lockheart © 2022

Float Along – Fill Your Lungs