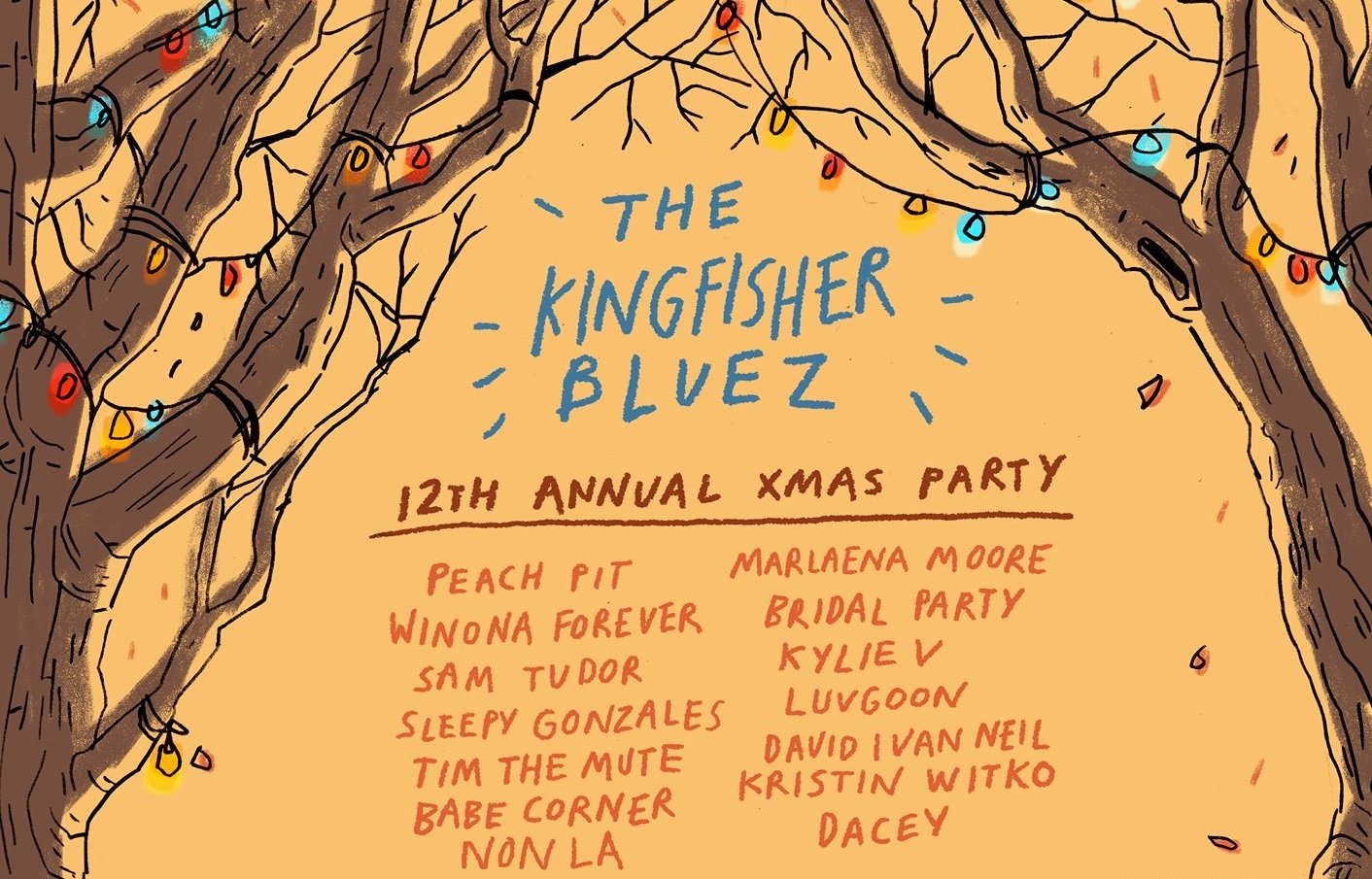 The biggest snowstorm of the year blew in on the morning of December 18th, covering the town in a layer of powdery holiday magic, just in time for the event of the season in Vancouver’s indie music scene, the Kingfisher Bluez Christmas Party. A holiday tradition, the event has been going on for 15 years now, hosted by KFB record label creator Tim Clapp. For the label, which has been pressing vinyl since 2011 and specializing in DIY small-run records, this annual affair is a celebration of the weird and wonderful local talent signed to the label.

The event boasts a six-hour marathon of music, with fifteen bands playing roughly 15-minute sets. For the bands, it’s a great opportunity to get some exposure on stage, mess around with some covers or seasonal ditties, and just let loose and have a good time. Local bands get their 15 minutes of fame–literally! As for the audience, if you come across a band you don’t really care for, it’s all good because it’ll be onto the next one in no time flat.

It’s definitely the best bang-for-your-buck concert around with tickets at just $30, and the best part is that all the profits from ticket sales and merch go to charity, this year the worthy cause that is 1-800-SUICIDE and Crisis Centre BC. What better way to get into the holiday spirit of giving? Plus, if you got snowed in like me, there was also the option to watch via live stream curled up by the Christmas tree and fire–a fantastic vestige of the early Covid days serving a wonderful purpose on this occasion, I must say!

Kicking off the festivities, after host Tim’s characteristically warmly awkward welcome, was seven-piece band Tractor Beam–not to be confused with the Idahoan blue grass combo of the same name! The indie slacker band, dressed in their cozy and festive best, brought a warm presence to the stage with scrolling guitar solos and luscious bows of electric cello. Their nihilistic ramblings featured unabashed vocals and hooky progressions across four sweet tunes including their engaging new single “Sex Appeal”.

Next to the stage was Max Boonch, billed for the gig as the “Tiny nipples guy from TikTok”–if you haven’t already, prepare to binge on his channel for the next hour or two! Stone-facedly jumping in by shouting random Christmas-related words into a distorted mic, Max and his crew brought an adept songwriting ability alongside the more familiar quality of approachable humour to the stage. In a set full of non-sequiturs, including a story of him spilling water in his underpants directly before the set, as well as revealing his last-minute band logo creation featuring Shark Boy and Lava Girl, Max kept us on our toes with his rough-around-the-edges vocals and unironic full-length compositions.

A brand new band Leave Yourself Alone, made up of transplants from many other projects, hit the stage next to play their second-ever live show together. Bringing a heavier element, the group had a noughties sound and garage band feel. The performance had a slightly chaotic and unrehearsed feel and their stage time was swift.

For the occasion, creative keyboard dynamo Future Star, rewrote all her songs to have Christmas lyrics, launching in by singing contradictorily, “I would never write a song about Christmas, cuz I don’t do Christmas, at least not for fun.” She brought her bubbly personality and knack for ditties as she belted out her new record release “Fill Me Up”, but with lyrics as sung by a Christmas stocking. She concluded with an original Christmas tune, “Santa Must Have Winter Tires”, which she wrote just earlier that morning about driving home after a night shift, a timely and relatable slice of life.

The next band, Flat Earth, came out looking ready to rob a bank, with black pantyhose over their faces, stretched over a 7-inch record on top of their heads, and frontman “Flat Pat” wearing a bulletproof vest. Coming in hot with their track “Flat Earth”, the group up their anarchic commentary on false information and ridiculous conspiracies with punk rock tracks. Peeling back layers and layers of irony, the group fully committed to the bit, they raged with “Don’t Give to Charities”–particularly juxtaposing at a fundraiser event!–“Lizard People” and other original compositions, spreading the flat fact and wishing us a “Flat Christmas” as they wrapped their one-of-a-kind set.

Tim came back on to welcome KFB Xmas alumni Grimm, who started with a track sharing a name with their forthcoming album, “Your Head is a House You Live in Your Whole Life”. Playing just three sprawling tracks, the band featured quavering retro synth and a dream pop sensibility. The songs were well-composed and enjoyable, particularly the roiling final track “Primordial Goo”, but the live set-up didn’t seem to do them any favours, putting a strain on any notion of vocal precision.

Reaching the near halfway point of the marathon gig, the frame of the live stream was notably packed out with even more bobbing heads before the stage as Cam Blake came up to take his turn. Exploring a solo project outside of his band Bookclub, Cam brought a head-banging take on an ethereal singer-songwriter aesthetic, like a mash-up of Dallas Green and Alexisonfire. By the third track, the band was in a really heavy space, Cam wailing dispassionately into the mic, but with an infusion of levity in the form of 90s synth lines running through it.

Dressed in white from head to toe was the next act, Grade School, who energized the crowd with their first strains and upbeat drumming. The indie-pop band delivered an injection of fun. “We’re happy as hell to be here,” they declared, delighted to have moved up from the first position last year to the middle of the pack, obviously doing something right. They kept the party going with a crunchy cover of The Strokes’ “Someday” and kept up the festive spirit with their original Christmas song tinged by a naive melancholy.

Continuing the snappy beats coming was self-proclaimed lovelorn queer pop trio Non LA. Their micro-songs packed a sufficient punch, doing it for an underrepresented demographic in this scene as they brought the fun. “Who’s gay?” the lead singer and guitarist asked by way of punctuation, eliciting a hearty cheer. “Oh my god, I feel so safe with all of you.” They wound down with their latest tune, slowing things down for a moment of introspection.

The evening’s host took to the stage next with his act, Tim the Mute, a quirky indie rock get-up with Tim careening into forceful yet goofball vocals and attention-defying, sometimes sad lyrics, counter to his happy-go-lucky demeanor. Debuting a new track “Fuss”, the band had a bouncy youthful energy and an undeniable relatability and likability, all the while reinforcing the Kingfisher Bluez label’s ethos of embracing weird, warm music.

A four-piece of young men in spiffy suits, making up the aptly named young friend, was up next in the line-up. The lead singer was giving it a lot of gusto, bouncing across the stage, spinning and convulsing to the happy bops. They rocked a little harder with a grungy cover of Radiohead’s “Bodysnatchers” and then rounded things out with a final poppy original with rap-like vocals over a catchy stripped-back riff.

The dreamy Babe Corner crowded the stage in flowing locks and blazers, setting in with spacey harmonies over organ tones and surf rock guitar to a pleasing effect, taking the tempo down impossibly slow before moving onto another lilting melody. The vintage quality of the sound seeped deliciously into every moment. They wrapped up with a ghostly incantation of “Blue Christmas”, which started off a capella and magically morphed into a honky tonk romp.

Winona Forever brought next a smattering of well-thought-out pieces with technical prowess and a mathy approach. As the instrumentalists grooved along in unison with vintage lines meeting fresh poppy melodies, the up-and-comers brought a friendly vibe to the stage, leaning against each others’ backs and swimming around the stage. Their feel-good jams were sopped up by an adoring crowd, at this point nearly five hours into the evening’s musical ambrosia.

Harkening the benefit show’s big finish was organizer Tim once more, but this time accompanied a deranged Santa character, gender-bending while cutting a feminine form in a red dress with a high slit along with a snowy white beard, manically shouting, “When I say Ho, you say Ho!” They proceeded to drop-kick t-shirts out into the audience, hyping up the crowd for the final act of the night.

In the extra long closing slot was a mainstay of the Vancouver music scene, Peach Pit, hot off a tour in the US promoting their third studio album, From 2 to 3. For this, their eighth appearance at the annual Kingfisher gathering, the boys took no half-measures in embracing the spirit of the season. They came dressed to kill as Christmas trees, in shades of green with strings of lights wrapped around them, with homemade paper cones (with a star on top!) strapped to their heads. The effect was brilliant, if somewhat impractical when the headbanging kicked in–and don’t even think about changing guitars! Their first song morphed, with a psychedelic swipe-screen of resonating loops, into the uber-catchy “Alrighty Aphrodite” brought to life with lead singer Neil Smith’s silky smooth vocals, followed up by the delightful “Drop the Guillotine”, also off the band’s first record, Being So Normal.

The festive guys switched things up with low-down country ditty, “Give Up Baby Go”, a stand out from their latest album which shone in its live iteration and lapsed brilliantly into “Hotel California” solo at one point. Jumping back to their iconic first album, crowd pleaser “Tommy’s Party” had the party-goers singing along with gusto, “Just like I used to!” as the soaring solo crisply rang out from guitarist Christopher Vanderkooy, simultaneously locked in an epic battle against his drooping cone hat. Making sure not to leave out any of the hits, the band busted out “Shampoo Bottles” before announcing that they had just one song left. “You guys are going to know the words to this one for sure,” Neil foretold as they struck up a faintly reminiscent holiday tune. Next thing you knew, Neil was straight-facedly crooning, “Apple bottom jeans, boots with the fur…”, in fact, all the lyrics to “Low” set to the tune of “Feliz Navidad”. I can tell you one thing, I will never hear that Christmas classic again without thinking of Flo Rida. The oddball pairing will undoubtedly be stuck in my head for days to come!

It was a brilliant night packed with festive hijinks and musical fun, for an excellent cause, as per usual, whether enjoyed in the bumping venue or cozied up at home. Happy holidays and here’s to 15 more years of the Kingfisher Bluez annual party! Ho Ho Ho!