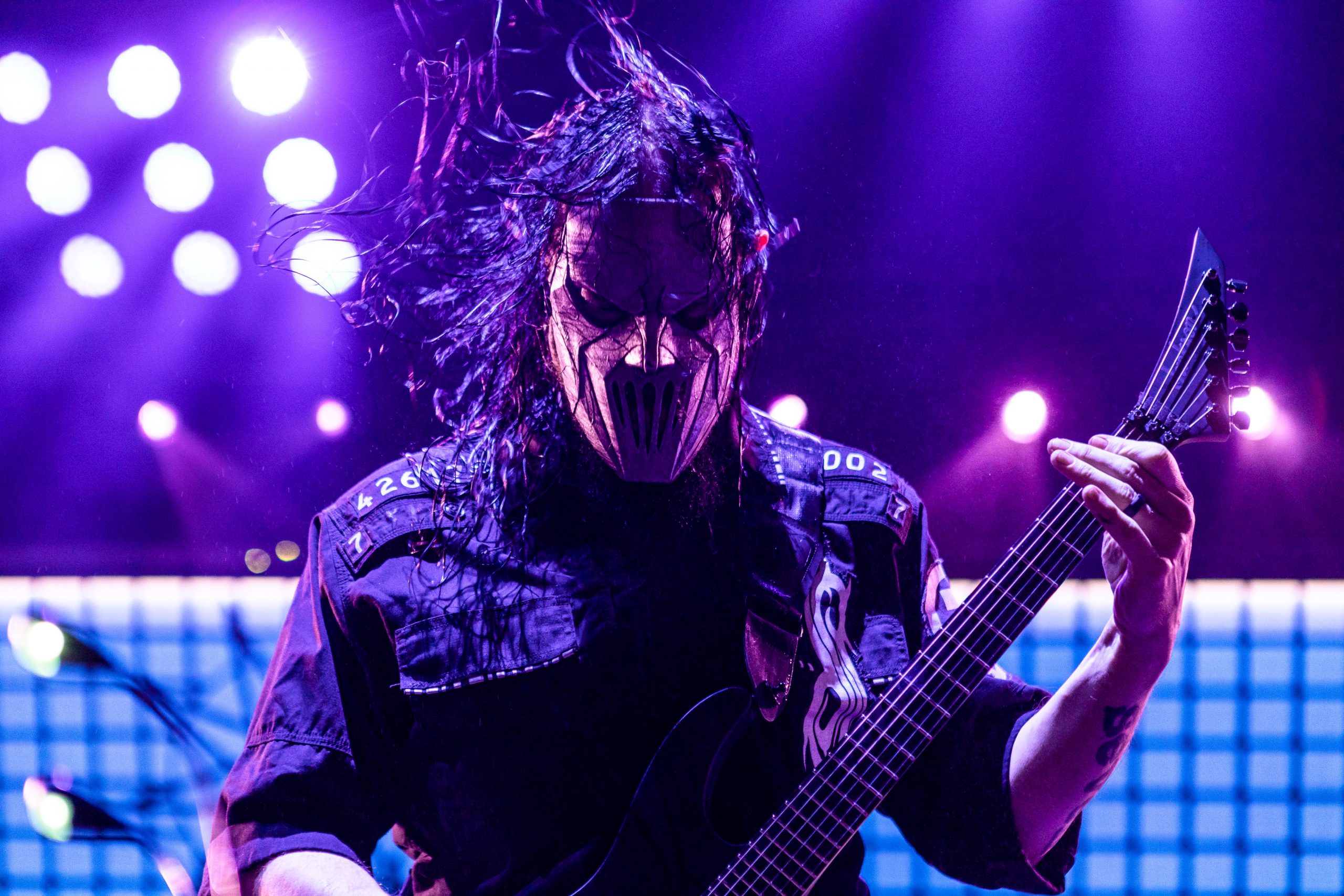 Note: All photos in this review are from their stop in Chula Vista on June 18th, 2022, which you can read about here.

The Halloween season is upon us. Horror movies are airing nonstop on tv, people are prematurely stuffing their faces with candy they swore would make it to Halloween night, and everyone is looking to confront their fears. And I can’t think of a better way to do that than with nine masked psychos and a band who has established themselves as reigning kings of horror rock and metal. The Knotfest Roadshow 2022 finished its third and final leg in Irvine, CA with the fantastic combination of Ice Nine Kills and the one and only metal juggernaut that is Slipknot.

Ice Nine Kills is a band that might seem like they were an overnight success, with the sudden success of The Silver Scream in 2018. Yet, they’d been grinding for 22 years at this point, hustling their asses off and steadily growing a solid following. Their story is a reminder to never stop evolving and to focus on your interests. If your interests happen to be an encyclopedic knowledge of horror movies and writing heavy, catchy, and most importantly fun music people will come running.

The fun part is what separates Ice Nine Kills from their metalcore peers. They can bludgeon you with blast beats, crush you with grimy breakdowns, but it never feels suffocating or brutal for the sake of brutality. In one song, lead singer Spencer Charmas, will be calling out to a child about to be hit by a truck, followed by another where he is gleefully singing about hacking up entitled tourists, or dancing around in a rain coat.

The band’s live show is part concert with a healthy amount of slasher stage play, and always entertaining. Costumes changes, beheadings, stabbings, axe murders, even a rendition of the iconic shower scene from Hitchcock’s classic Psycho. The attention to detail is on another level with one particular moment standing out to me. During “The American Nightmare” the strobes went from white to red and green, a subtle nod to Freddy Krueger, the infamous slasher from A Nightmare on Elm Street.

Ice Nine Kills puts on a spectacle in every sense of the word, so buy a ticket and take the ride, you won’t regret it.

Corey Taylor is one of the most charismatic lead singers in not just metal, but music in general. He is as funny as he is terrifying, intent on pulling everyone into the Slipknot family. He is the voice of a deranged collective of musicians, the insane warden of a mental hospital with a clown security guard who stalks the halls with a bat.

Then there is Michael “Tortilla Guy” Pfaff, hanging from a 15 foot riser, cocking his head to one side while happily beats on a keg with a metal pipe. DJ Sid Wilson who is now more machine than man, the only reminder of his humanity, his own severed visage, which creepily mouths the words to every song.

Their set was full throttle, with the closest thing to a slower song being “Dead Memories”. While the set only saw one new song, “The Dying Song (Time to Sing)”, from new album The End, So Far, it fit in perfectly. As did the metric ton of pyro used during Slipknot’s set, which shot out from behind and above the band as well as eight pillars in the middle of the stage. I’m sure even the people in the back of the venue could feel the heat.

Slipknot is at the point where they have nothing left to prove, yet they continue to pour more ideas, money, blood, sweat, and tears into the show. While they said this would be their last show in the USA for awhile, I’m sure when they come back it will be worth the wait and blow everyone away.