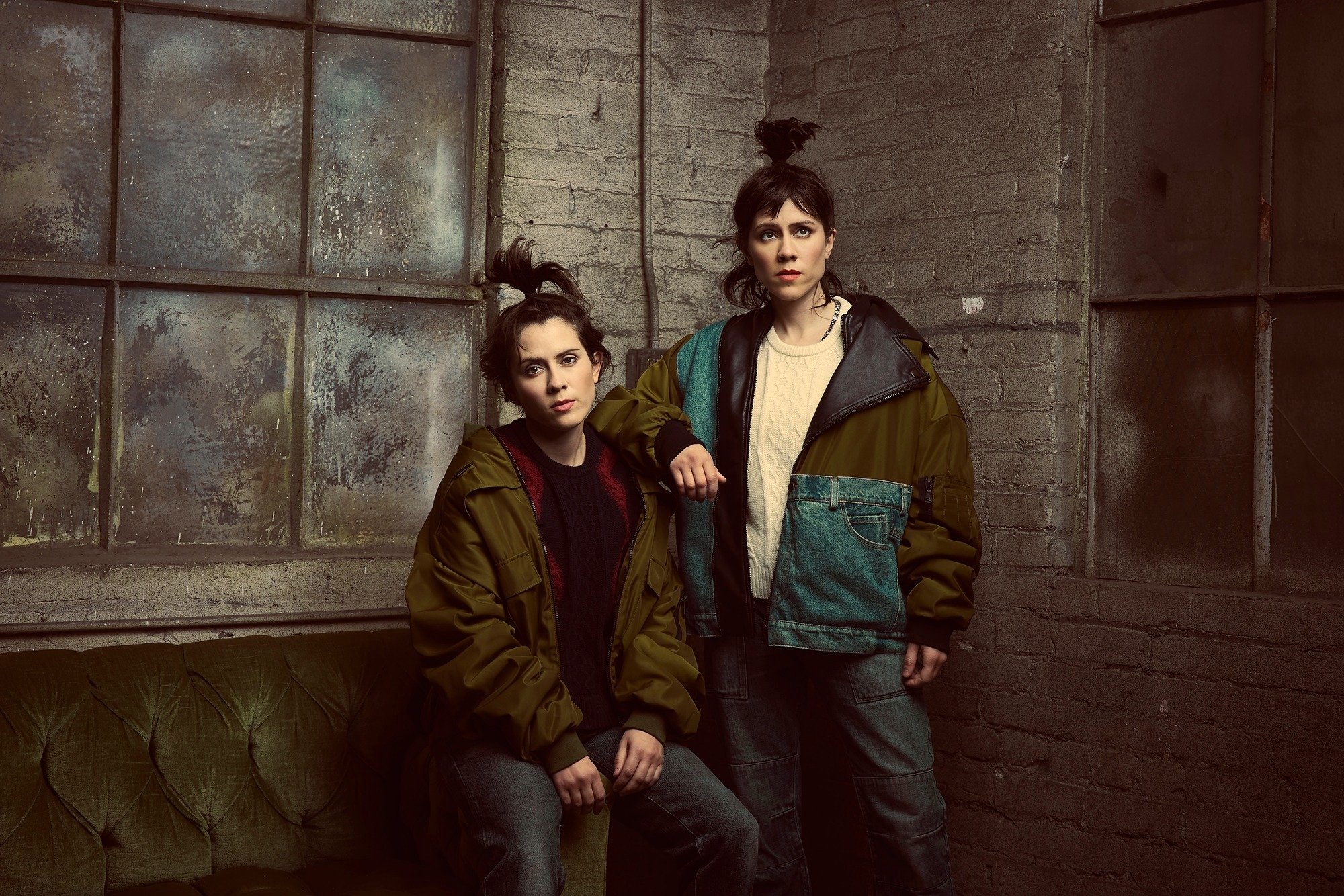 “Insider secret: playing your hometown is the worst!” declared one-half of the legendary duo on stage at the Commodore Ballroom last Sunday night. “People see you all the time doing normal stuff like getting coffee, shopping for groceries, picking up my dog’s shit. And then they come out to the show and they’re like, ohh cool song.” Die-hard fans might be able to guess the artist just from this snippet of dialogue alone, but if you can’t, let me give you a few more hints. They’ve been making music for over two decades, have released 10 studio albums to date alongside a melange of remixes and reimaginings, they are LGBTQ+ icons, they’re twins…are we getting warm yet? That’s right, Canadian musicians Tegan and Sara are now both full-time Vancouverites, making this the final stop on their Crybaby tour in support of their latest release of the same name.

“Vancouver, this is sort of like the start of a relationship so I need to be honest,” Tegan Quinn stated, addressing an excited crowd early on in their set, “you’ve let me down before. I’ll just say something: this show will go on as long as you want it to. But we’ve go to hear it, okay? Okay!” This was just one of many canny interludes of the night; it seems with Tegan and Sara you come for the music but stay for the witty repartee. The crowd hardly needed the extra incentive to get revved up–the place was absolutely packed with superfans ready to groove to the dancey vibes representative of the new album interspersed with nostalgic tracks. The nostalgia levels are so high with Tegan and Sara because their music speaks volumes of what it’s like to grow up, find yourself…and maybe even find yourself making the same mistakes years down the line. They continue to bring the nostalgia factor, recently revisiting their early demos and formative years. They were just so compelling to all of us as teenagers and young adults, rebellious and genuine, fun and freeing– from Gen X to Gen Z, it’s no wonder we continue to be drawn to them. They are a special breed in the realm of Canadiana.

Although I did manage to catch a lovely, unplugged Zoom performance by the group during the lockdown, we had been missing their larger-than-life live presence since their last tour, pre-pandemic, in 2019. That same year, the alternative pop-punk duo took their first foray into the literary world, releasing their memoir High School, recounting their experience growing up in the 90s, exploring their identities and relationships, both as sisters and as individuals. The highly-praised book has since been adapted as a show available to watch on Amazon Prime that came out this year and a graphic novelized sequel, Junior High, is forthcoming. Withl this new branch of their oeuvre, they are certainly tapping into that special sauce that made them like catnip to young listeners. After many years of growing and developing since high school, across a healthy music career, Tegan and Sara clearly have no problem staying in the spotlight and tapping into an ever-evolving well of creativity, as well as the promise of a hella fun live show.

Opening for T&S was, Tomberlin, the mononym of singer-songwriter Sarah Beth Tomberlin, performing on this tour with “her friend Abby”. The unassuming young duo picked up a guitar and a clarinet in a mellow, shoe-gazey melody. The songs rang true, pretty and sad—brave to perform over the roar of conversation and the babble of people ordering drinks and having dinner in the ballroom, but Tomberlin sliced through with her humble stage banter. “Have you ever dated an alcoholic?” she asked, or, “Do you guys like getting stoned?” Shyly snickering, she engaged the front row in an impromptu Q&A before settling into each tune. Apart from endearing herself to everyone in her sphere, her third song, “Stoned”, saw her opening up vocally, showing power beyond her initial breathy, mellifluous innocence.

During the set, Tomberlin showed us exactly why it was so special for her to be opening on this tour. She told her beautiful personal narrative of growing up a pastor’s child, a closeted queer, home-schooled and not allowed to listen to secular music. “Once a year my cool older cousin would upload all her iTunes onto my phone and that’s how I was introduced to Tegan and Sara,” she explained. Didn’t we all start listening to them on the recommendation of a cool friend? It’s amazing to think that the notorious twins opened the door for future artists like Tomberlin to emerge, along with providing an edgy affirmation to generations of listeners who might have felt like they didn’t quite fit in.

“It’s so loud in here,” Tomberlin mused. “Do you guys ever disassociate?… Me neither.” While the moment was played for laughs, the young woman shared that her next song was born of a long period of disassociation she experienced during covid. Tapping into the universal sense of dread derived from doom-scrolling married with the unhealthy allure of social media, she said that all she wanted to do was throw her phone into the nearest body of water. “All I could do was take a walk and pretend I was a tree. That’s what this song is about,” she expressed with a rinse of dark humour. Abby provided beautiful harmonies for the final heart-wrenching number as their two voices and guitar picking swirled and meshed together in the air. Her music is a pure and honest portrait of generational anxiety and respite to the noise by which we are constantly surrounded.

A flash of neon announced the start of the main act. Playful lights flickered and glowing neon ice cream cones adorned each mic stand on stage, clearly representing the brand of Crybaby. The pair were looking as fresh as the twin songsters took the stage, Sara clad in a powder blue oversized tracksuit and Tegan in a billowy, patterned shaket. Both were rocking bangs which, Tegan comically explained, is a problem when you’re twins because people will assume one copied the other. The gals sounded fresh as ever too as they launched into an effervescent “Stop Desire” and kept the party going with an upbeat banger “I Can’t Grow Up”, one of their latest singles from the new, decidedly poppy album.

It’s no secret that in recent years their music has been embracing more and more electronic elements, drum tracks, synth and dancey elements, certainly a departure from their earlier work but not an unwelcome development by any means. After more than two decades in the biz, their stage show is polished within an inch of its life with a backing band, guitar techs and swish arrangements, but the energy and fun the twins bring to the stage is buoyant as ever. As the two alternated taking the lead on the mic, so did they alternate between featuring new tracks and beloved classics that the crowd went wild for, like “Back In Your Head” and “The Con”. As if solely to prove Tegan wrong when she jokingly cast doubt as to whether the audience had actually listened to Crybaby, the crowd absolutely belted along to “Fucking Up What Matters” and “Smoking Weed Alone”, both relatable, layered anthems playing with isolated vocals and catchy choruses.

“Is anyone here married? Anyone on a first date or in the early stages of love?” Tegan implored in her usual playful and cutting dialogue. “This is a song about when you break up and are unhappy,” she stated in that deadpan humour by way of introduction to another new one, “Faded Like a Feeling”. The song got off to a rocky start, those lyrics not quite in the pocket yet perhaps, but Sara smoothed it over after the soft and flowy breakup song, commandeering the mic to tell a story about a nefarious weed gummy bear and reassuring her sister, “It’s okay, people like to see your imperfections.” Uncharacteristically, Tegan flubbed the lyrics to a stripped back and smoothed out version of “Living Room” a couple of songs later. Maybe the exhaustion of the tour was catching up. I missed the simplified bass drum kick, fiery banjo picking and steel drum tones of the original too in this over-produced rendition.

The band reeled us back in with “Walking with a Ghost” and then announced that they were going to play their infamous “Grey’s Anatomy” song next (“Where Does the Good Go?”), recounting a hilarious history of how the song came to be and the sellouts it made them. “We want you to sing along,” she continued teasingly. “You don’t have to, but if you don’t then the show’s over,” getting a huge laugh and joking that they would all think they had become such cunts since turning forty. The affable chit-chat in between songs throughout was honestly just as entertaining as the music and good enough to rival any stand-up act. The acoustic-style singalong continued with “Call It Off”, allowing the voices of the enraptured audience to ring out alongside the musicians’, and Tegan encouraged the concert-goers to sing from their butts instead of their guts. The crowd was loving it and showing it in spades.

The set was winding down as they reached their new power ballad “Yellow”, an emotional peak of the new record. The formalized setlist that had been consistent across the tour concluded with “Closer”, which was performed at an epic volume, the bass resonating in the wall and every piece of furniture in the building, and saw the audience raving at the drop, bouncing on the Commodore’s signature rubbery floor. Everyone was clearly hungry for more and, with the tease dropped at the beginning of the night that the show might go on beyond its anticipated boundaries, we definitely thought there was more to come even as the band exited the stage. The shocker of the night came when, after a solid five minutes of persistent cheering, gentle music started playing and house lights started fading up one by one. What, no encore?? For all the bigging up that they had done about playing one last special hometown show, and with such an impressive back catalogue to draw from, to just play their pre-planned, 80-minute set and then peace out was just a bit…confusing. I could hear this very spreading through the crowd as they shuffled towards to doors. If Vancouver had let Tegan and Sara down in the past, maybe this was their way of flipping the script on us for once.

Set List:
Stop Desire
I Can’t Grow Up
I Bet It Stung
Back in Your Head
Fucking Up What Matters
On Directing
Faded Like a Feeling
Smoking Weed Alone
Boyfriend
Living Room
The Con
Nineteen
Walking With a Ghost
Where Does the Good Go
Call It Off
Dark Come Soon
Yellow
Closer