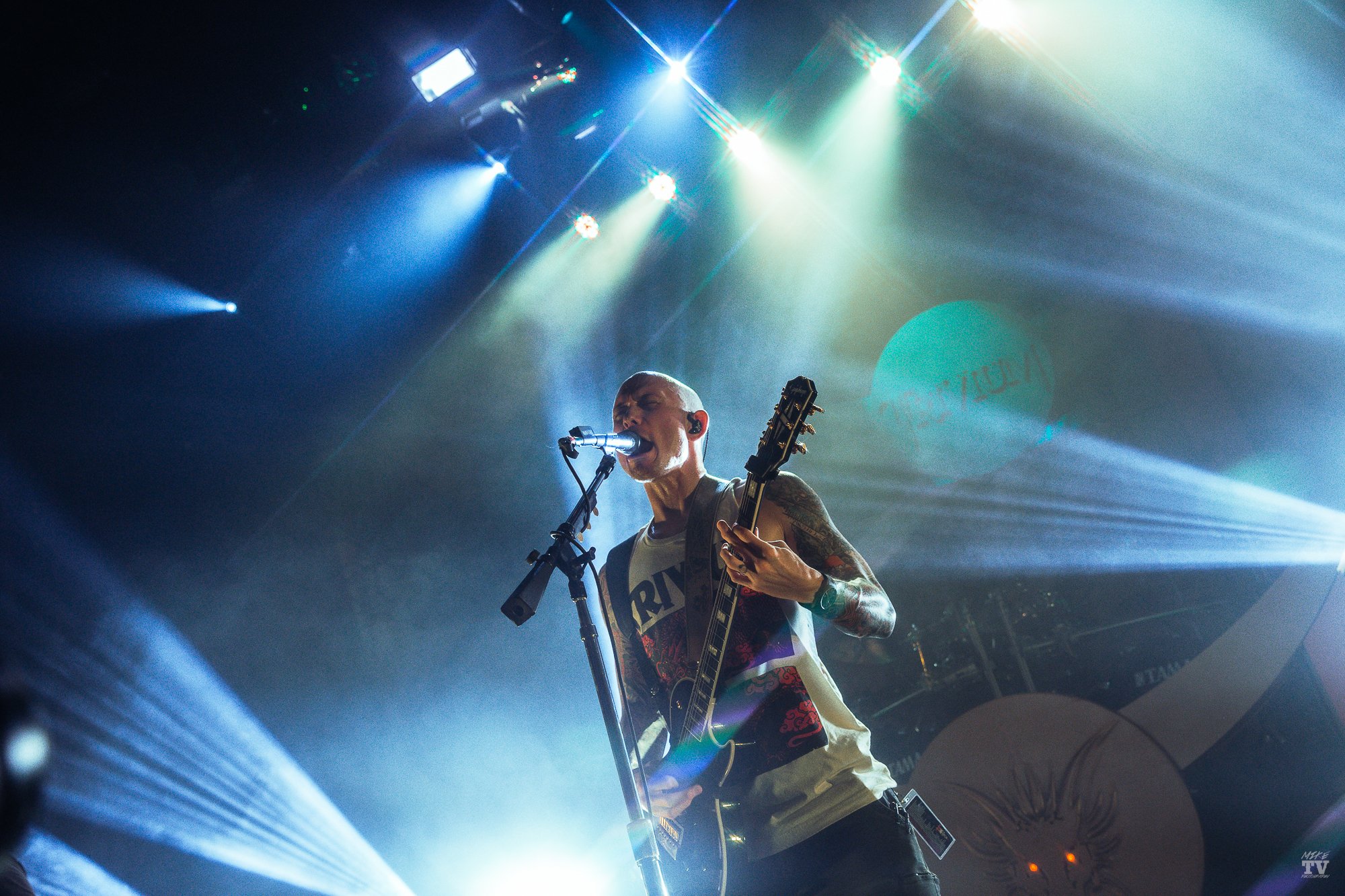 Live Review: Trivium + Between the Buried and Me + Whitechapel + Khemmis @ The Vogue Theatre, Vancouver – October 4th 2022

Vancouver’s Vogue Theatre played host to a metal tour of epic proportions this Tuesday evening. A quadruple bill of metallers making up the hefty ‘Deadmen and Dragons Tour’ fronted by mega-rockers Trivium is making its way across North America this month and into November. Frontman Matt Heafy has been thrashing along for the better part of two decades and keeping fans interested with a surefire combo of theatrics, charisma and of course the rage-filled music to give you life. His bandmates bring incredible technical talent to the mix, particularly shred-master guitarist Corey Beaulieu and drummer Alex Bent, who is ranked among the best in the genre currently.

Despite some ups and downs in their career, the closeknit crew have carried on giving the people a fantastic live experience. Heafy explained that the last time Trivium were in Canada in 2018, his bandmates pulled together to cover for him as he had to dash off to witness the birth of his twins, opting to miss a few shows rather than having to cancel on their Canadian fans altogether. While apparently highly regarded metal vocalist and ex-singer of Killswitch Engage, Howard Jones (who was touring as part of the opening acts with Trivium back in 2018) did a hell of a job filling in for Heafy last time, I’m sure fans this week were excited to see the original line-up back to slay the day.

The first opener promptly taking the stage in what promised to be a marathon of rage rockers was Khemmis, a modest doom metal band from Colorado. The members looked like they had been plucked straight out of the pages of the 80s hair metal book, having a great time mugging to the crowd along to their anthemic melodies. The mosh pit started early on in the empty spaces of the floor of the vintage concert hall as the guys filled the space with righteous music. Their quickie set’s closing tones were that of distorted organ pipes and incantation borrowed from traditional gospel “O Death”, ushering their final epic power ballad “A Conversation With Death” that crept over you like sugar coated cyanide.

Next up was deathcore group Whitechapel, bringing their straight forward rage embodied in frontman Phil Bozeman’s pleasing tones of deep dark screaming and emotionally charged vocals. The band’s exquisitely mic’ed drum kit thundered like a drum machine vibrating the walls of the suddenly packed hall, fans headbanging in the bewildering strobes of the custom light rig. The guys were looking to get the crowd hyped up with “Lost Boy”, Bozeman bent over in his screamo stance to deliver the fast-paced number. Through his rich, dark screaming strains Bozeman could have been delivering a metal cover of “Rapper’s Delight” for all I could make out, but it was a fun bop, getting bodies pumping and hair whipping in unison from wall to wall. The band wrapped with back-to-back heavy hitting tunes that reverberated in the back of the skull, delivering demonic belting, pitch shifting to haunt your soul.

A mischievous carnivalesque melody welcomed the final opener of the night, Between the Buried and Me, onstage. The playful progressive metal outfit seemed to have a polarizing effect in the audience, with some diehard fans clearly here just for them and other concert-goers (particularly those holding down the frontlines) not even offering a head bob as they presented their experimental style of metal. Their dizzying first number, “Sun of Nothing” was a full on assault on the senses that gave way to non-sequitur interludes and unfolding waves of musical themes and genres. The group elicited a tremendous cheer for fan favourite “Extremophile Elite”, fast paced and punishing but not without its own characteristic musical meltdown into something completely different, in this case a xylophonic deviation.

When you’re a band with an extensive catalogue and a reputation for long-form songwriting, it must be pretty difficult to decide which numbers make the cut in an achingly short 50 minute set, but of course BTBAM were looking forward to showcasing 3 tracks off their latest record Colors II. The new tunes further emphasized their curious style, one I could only describe as a metal band occasionally lapsing into an alternate dimension. Their style occasionally warped into faux-Latin/marimba vibes and Santana-esque soloing on “Revolution in Limbo”, an ambitious piece of storytelling with equally introspective moments to temper the seemingly awry musical influences. With another turn of the dial the group bled into a chaotic 90s synth and funk flair for another inventive epic intriguingly titled “The Future Is Behind Us”. Their selection on this tour seemed particularly rageful, probably to match this line up of heavy hitters, but didn’t quite showcase the full range of this unique band’s musical vision.

In case anyone had forgotten in all the pandemonium who the main event of this quadruple header was, a flood of Trivium-backed fans flooded to the floor fresh off the bustling merch table. The stage crew were busy working away in secret behind a white sheet unveiling mysterious stage adornments that had remained enshrouded throughout the early half of the evening. As the auditorium was plunged into darkness, all that could be seen through the veil were two red lights glowing ominously as Iron Maiden’s “Run to the Hills” played as a welcome song. Amidst puffy cloud-like projections, the curtain dropped revealing an elaborate Feudal-Japanese themed set with fully branded pagoda, drummer Alex Bent perched high at his sprawling kit in the middle of it atop the source of the red lights, the eyes of a golden dragon medallion. Fully embracing Matt Heafy’s Japanese roots, the backdrop was an irezumi fantasy featuring zombified samurai and bronze dragon statued sat guarding either side of the stage.

The band started off with some of their signature marching anthems, Corey Beaulieu showing off guitar prowess from the word “go” with a mind boggling solo. By the time they made it into the upbeat and stirring “The Sin and the Sentence” the crowd was already fully engaged, starting to crowd surf and bouncing at least a foot high in the air. Super fun and pretty lights, a snappy pre-chorus, racing drums and magnetic vocalist made for a deadly combo in the track.

With the swagger of a radio DJ, Heafy easily played the part of hypeman to get the crowd pumped up further. “There is to be no quietness, politeness or shyness tonight!” he urged the sea of sweaty people. He was constantly encouraging everyone in attendance to be on their worst behaviour to win title of best Canadian city on the tour. “Everyone scream whatever word they want to on the count of three!” He directed next, and to a resounding drone of profanity, he announced that, “Now we got a party,” and launched into “Amongst the Shadows and the Stones”, a tour debut. Commanded to scream along, the fans continued belting out lines as the band dropped to silence. Travelling from one of half a dozen mic stands planted at the very front of the stage, Heafy was militantly making sure everyone was having a great time and giving everyone a good view of the action. Kicking it into double time, picks and sticks moved incomprehensibly fast as spectators bucked wildly before the band moved into the fast, heavy and techy “Chaos Reigns”.

The band momentarily slowed things down with debut off their 10th and latest album, “In The Court Of The Dragon”, but not for long as the song entitled “In the Shadow of the Abbatoir” bubbled and brewed into a roiling denouement. Slipping off stage for a moment, the guys came back with a vengeance with “To the Rats” which saw a whipping whirlpool get going in the pit. At some point someone managed to produce a guitar from the crowd and passed it up for Heafy to sign, which he happily acquiesced and handed back to the buzzing fan who already had every other signature but his from last time around.

A highlight from latter half was the soaring “Shogun” a sing-along of metallic proportions transitioning to slower tempo with operatic vocals operatic building again to epic conclusion of the raging saga. Punching to the evening’s pinnacle the band busted out “A Gunshot to the Head of Tredpidation” which had the whole crowd jumping and fist pumping. With impeccable production value and impressive vigour and a hand-picked line-up of bands admired and influencing Trivium, this newly underway tour is guaranteed to be a highlight for metallers across the continent!

Between the Buried and Me: