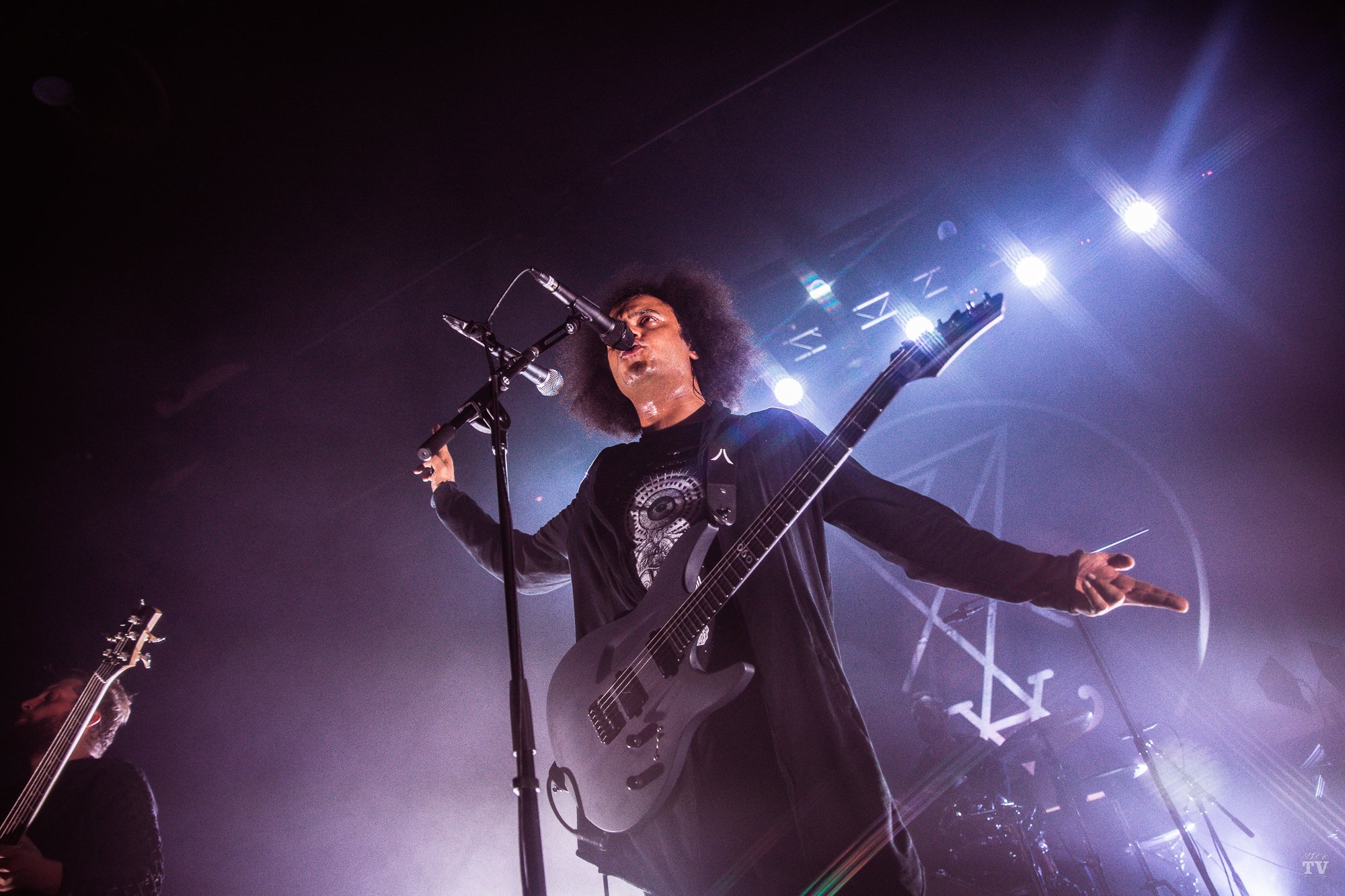 Vancouver’s Rickshaw Theatre was lit ablaze this week with a triple bill seemingly forged in the fiery pits of hell, yet brought together by divine inspiration. The venue saw an incredible Monday night turnout for headliner Zeal & Ardor, a relative newcomer to the black metal scene that is turning the genre on its head. Swiss-American frontman Manuel Gagneux has brought to life an incredibly poignant concept and created a unique musical experience with this project, taking inspiration from the parallel between Christian imposition upon slaves in both America and Norway. The dawn of black metal in 1990s Norway was a rebellious reaction to the country’s monotheism, so Zeal & Ardor is a thought experiment reimagining a dark corner of history if African American slaves had rebelled in a similar way. The product is an exciting blend of traditional blues, gospel and rockabilly with Satanic heavy metal influences, a combination that got the crowd whipped into a holy frenzy Monday night.

Supporting Zeal & Ardor on this tour are ethereal Norwegian gothic metallers Sylvaine and jazz-inspired progressive black metal group Imperial Triumphant, both a great match for their headliners with their spiritual underpinnings. Late-coming Imperial fans may have been dismayed to find that the three-piece band would be kicking things off in the evening lineup. The group crept upon the stage, silhouetted by flood lights as drums started pounding. Spotlights faded in illuminating the trio’s embellished pagan-style bronze masks, as chilling as a slasher film reveal. Lead singer and guitarist Zachary Ilya Ezrin’s croaking drawl spilled out eerily from beneath motionless lips. Their frozen expressions catching the light as the instrumentalist swayed and bent, their strong look took life and was strangely emotive during the dumb-striking magnitude of the music.

In their second piece, the band’s drummer Kenny Grohowski, who is becoming increasingly preeminent among his peers, began to really show his prowess, building from calculated single taps to a finessed flurry of action. While the band opted for a heavier, revved up selection for their set, their recordings reveal an intimate knowledge of sophisticated jazz drumming and mind-bending tonal progressions as viewed through a metal lens. Splicing in distorted retro audio and cinematic overlays to introduce another driving track following, chaotic jazz lines devolving into apocalyptic metal madness. Raising his hands in the air like an automaton god, Erzin highlighted something primal in their performance while maintaining musical nuance, a mix of instrumental and lyricised.

As the wall of sound simmered into the most light-handed drum solo, Grohowski holding the sticks ever so delicately to find harmonic cymbal combos, the stage went black and a desolate guitar wail permeated the stage. Bassist Steve Blanco emerged from the shadows producing a bottle of champagne from his flowing black robes, proceeding to slide it along the strings in ghostly power chords. To ongoing uncanny tones, Ezrin grasped the bottle like a high priest seizing his sacred communion, shook it high over his head and popped it into the crowd, showering the front rows on sticky nectar and pouring it out into revelers’ open mouths. After this crowd-pleasing party trick, the band played their last one of the night, Grohowski’s incomprehensibly swift hands flying and Ezin’s indecipherable vocals growling out. Blanco, as if swept away in the holy ritual, threw himself onto the ground, supercharging the crowd as he pounding his bass on the ground in an epic finale. Taking a bow and leaving on a literally unresolved note, the band skulked off stage leaving the crowd hungry for more.

Ambient post-metal group Sylvaine arrived onstage minutes later with a lighter touch, their backs turned to the crowd as a chilling hymn hummed angelically before the female fronted four-piece exploded into righteous rock. Vocalist, composer and multi-instrumentalist Kathrine Shepard set the tone non-verbally with a primal wolf-like cry. Screeching out lyrics like a banshee, Shepard was utterly arresting, her flowing bleach-blond tresses whipping behind her as heavy bass drum pounded in our chests. The mastermind behind the band’s often folkloric and ethereal creations showed her range as they eased into their second number, swapping the uncomely howling for sensual smooth vocals of a remarkable range underpinned by primal scrubbing guitar and thudding jungle drums.

Busting out a track entitled “Fortapt” from her new album Nova, Shepard explained that she was venturing back to her Norwegian roots, a fantastical journey in multiple movements with a haunting melody that sent a shiver up my spine. Just to make sure we were all “good and confused”, the band then wandered into a Japanese-inspired number called “Mono No Aware” that swept us away and concluded on a forlorn note of a beautiful tragedy. With band members consisting of Norwegian, German and French the group takes on a universality that could reach a wide-reaching audience. The band made sure we wouldn’t forget them with a punishing finale of pounding drums, strumming and screaming, hypnotic and unrelenting. I don’t think I’ve heard a more blood curdling scream in all of metal; it might not be my cup of tea, but it was graciously tempered by Shepard’s crystalline harmonies and reverberated chanting harmonious. Add that to the woman’s charming demeanor–continuously expressing her delight to be back in the city after just a few short months–coupled with enticing elven features and I would bet she stole several hearts that night.

The moment they left the stage, a juxtaposition of barebones piano music and a projection of a disturbing animation of a life-like plucked chicken-man dancing rhythmically commenced. How this would relate to the final set of the night would be left to the interpretation of the audience. I was loving the rough-and-readiness of the Rickshaw, one of the few genuine venues left where you can see band members crossing the stage to collect their gear or mixing in with the crowd and roadies coming on to erect Z&As impressive custom light rig and tailored backdrop.

A soundwave rippled out and a strain of Billie Holiday’s “Strange Fruit” blurred into archival radio and a house beat, setting the perfect thematic mark for Zeal & Ardor’s entrance on stage. The one-of-a-kind band making a sizzling statement with each initial riff and vocal line, throwing away any semblance of genre rules. Right from the first track, the sound harkened back to the nascence of rock and roll as it evolved (or was outright plagiarized) from black spirituals in the South. From a rockabilly verse, the song code-switched into the hardest headbanging music of the night, inciting a fascinating realization of the genealogy of rock music. It’s easy to forget that two such different-sounding styles are actually distant cousins; this brilliant cross-exploration really sets this group apart.

So many of Manuel Gagneux’s wonderfully schizophrenic compositions disguise themselves as innocuous gospel standards but quickly become engulfed by darkness, firey hot with rockabilly licks giving way to a driving metal refrain. During songs like the soulful “Ship on Fire” and catchy, hand clappy “Row Row”, Gagneux plays the role of a Christian preacher slowly being possessed by the righteous spirit of Satan live on stage. With lyrics like “You better run,son” and “I’m a slave to none”, Zeal & Ardor’s body of work could handily make up an alternate soundtrack to films like 12 Years a Slave or Django Unchained.

A few songs in, the lead singer explained that two of his backup vocalists were out sick, imploring the crowd to do their part to fill the void. This assignment was happily obliged by the feverish crowd, and tunes like “Blood in the River”, “Gravedigger’s Chant” and the particularly stirring “Devil Is Fine”, which united the crowd together in a gospel chorus fit for the antichrist  lent themselves perfectly to the task. The chilling call-and-response reminiscent of a chain gang melody draws to mind powerful images of a particularly shameful corner of American history. All the while the beautifully thought out and innovatively programmed light display added to the emotion of the music, disorienting and vibrant. With staggered spotlights and a foggy haze cast across the stage, the lights were able to quickly erase and revive the front man from one moment to the next, invoking the erasure of black rights, histories and culture over the decades.

Indeed, the very existence of such a prominent black voice in the metal scene is a feat unto itself, extremely underrepresented in the genre. Gagneux more than proved his mettle at this gig, doing double-duty on a dual mic setup, thrashing his vocal chords with gut-wrench wails alongside rich twangy licks. The set showcased a great number of tracks off their latest self-titled release which wades even further to Satanic-inspired material, perhaps as a response to the increasing fundamentalist fanaticism in the USA. They certainly got the desired effect at this performance with the  inflammatory blasphemy of “Death to the Holy”, the demonic whisperings and cult leader energy of “J-M-B” and “I Caught You”, not to mention “Feed the Machine” which invokes the names of several prominent figures in Occultist texts.

Dispensing with the BS of walking off stage pre-encore, knowing full well the band would return, Gagneux consulted the delighted audience on this matter with the welcoming stage banter he had been projecting throughout. Though clearly a visionary and rock deity in his own right, Gagneux repels any hint of pretension or arrogance. The set concluded with a final Satanic affirmation that is “Baphomet” that Z&A seemingly have only recorded in its live iteration. The charismatic frontman had the audience all chanting along “Right hand up, left hand down / Flame on top and a moon around” with their two right fingers piercing the air. It was a fitting end to a spiritually charged evening, and Zeal & Ardor certainly left their mark on the Vancouver scene. Don’t miss them on their next tour around – once you see it you will become a believer, guaranteed!