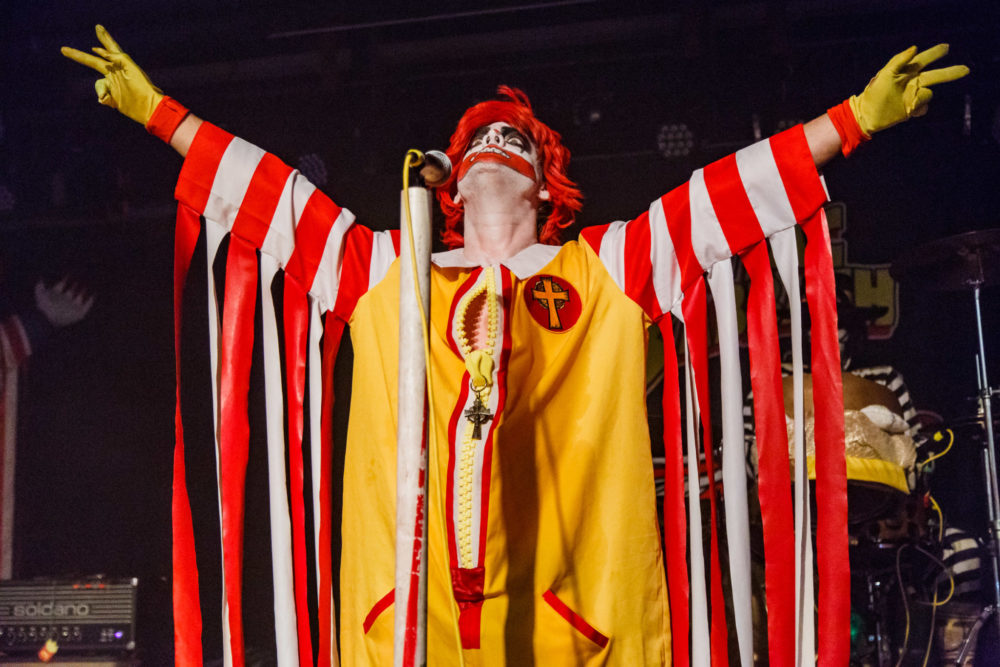 Let’s talk about tribute bands for a minute. I’ve always been pretty cynical about them – for years, my one experience with a tribute band was coming across a random Moody Blues cover band at a street festival in Akron, OH. They were trying (and failing) to look like them, trying (and failing) to sound like them, and just… well, in general, failing. Worse, they were clearly talented musicians (that music isn’t exactly simple) whose talents just seemed wasted playing Moody Blues covers to an overall indifferent crowd at a street festival. Since that experience, my entire attitude toward tribute bands has been one of dismissal. Why would you waste your talents playing somebody else’s music? The only tribute band that I could (mostly) get behind was The Musical Box, the Genesis tribute that puts so much effort into meticulously recreating the band’s classic Peter Gabriel-era tours that it’s almost impossible not to respect them.

That was, of course, until I saw “drive-thru metal” band Mac Sabbath at the Baltimore Soundstage the other night. They’re (amazingly) not the first fast food-themed tribute band out there – that honorific belongs to Pizza Underground, Macaulay Culkin’s bizarre, stoned-out homage to extra cheese. They’re certainly not the first Black Sabbath tribute band (a quick Google search turns up so, so many options if you really want to hear someone play Black Sabbath songs in a bowling alley or at your birthday party). What they are, though, is one of the most original takes on the entire tribute band idea, taking the music of Sabbath and turning it into something else entirely – a tribute band and a cultural critique all rolled up into one.

The band opened the show with “More Ribs” (the band’s take on “War Pigs”) with singer Ronald Osbourne coming on stage straightjacketed, the demented, genetically modified alter ego of a certain fast food figurehead. His voice doesn’t sound much like Ozzy, but that’s a good thing – half of the fun of the band is the lyrical twists on the songs, and he manages to sing in a way that makes it possible to make out most of the words. Guitarist Slayer MacCheeze and bassist Grimalice perform in costumes so large and intricate that it’s amazing that they can even see their instruments or the stage, let alone play the complex metal solos of Tony Iommi and Geezer Butler. Yet they pull it off admirably. Drummer Catburglar has it easier, his Peter Criss-style makeup the only thing between him and his instrument.

While most of Pizza Underground’s lyrics come down to “man… you know what would sound really, really good right now? a pizza,” Mac Sabbath is an entirely different beast. Their songs take topics such as low-wage jobs in “Chicken for the Slaves” (“Children of the Grave”), corporatism in “Brand of Doom” (“Hand of Doom”), and obesity in “Lord of the Swirl” (“Lord of the World”). The band even played a new song, “Organic Funeral” (“Electric Funeral”), which Osbourne explained was “about the death of real food.” Osbourne noted that “Frying Pan,” the band’s take on “Iron Man” that introduced them to the world, has reached nearly a million hits on YouTube. “I don’t know what that means, but the last time I had one million hits, I wandered out into the forest for a week and came up with the idea of this band.”

The band’s set was short at nine songs plus a return for an encore of “Pair-a-Buns” (“Paranoid”), but it was just about the right amount to avoid playing the concept to death. Overall, it was a fun show. Have they changed my mind about tribute bands in general? No, not really. Mac Sabbath is almost certainly a concept with a sell-by date stamped on the bottom, but in the meantime, if it appeals at all, they’re a spectacle well worth an evening of your time.