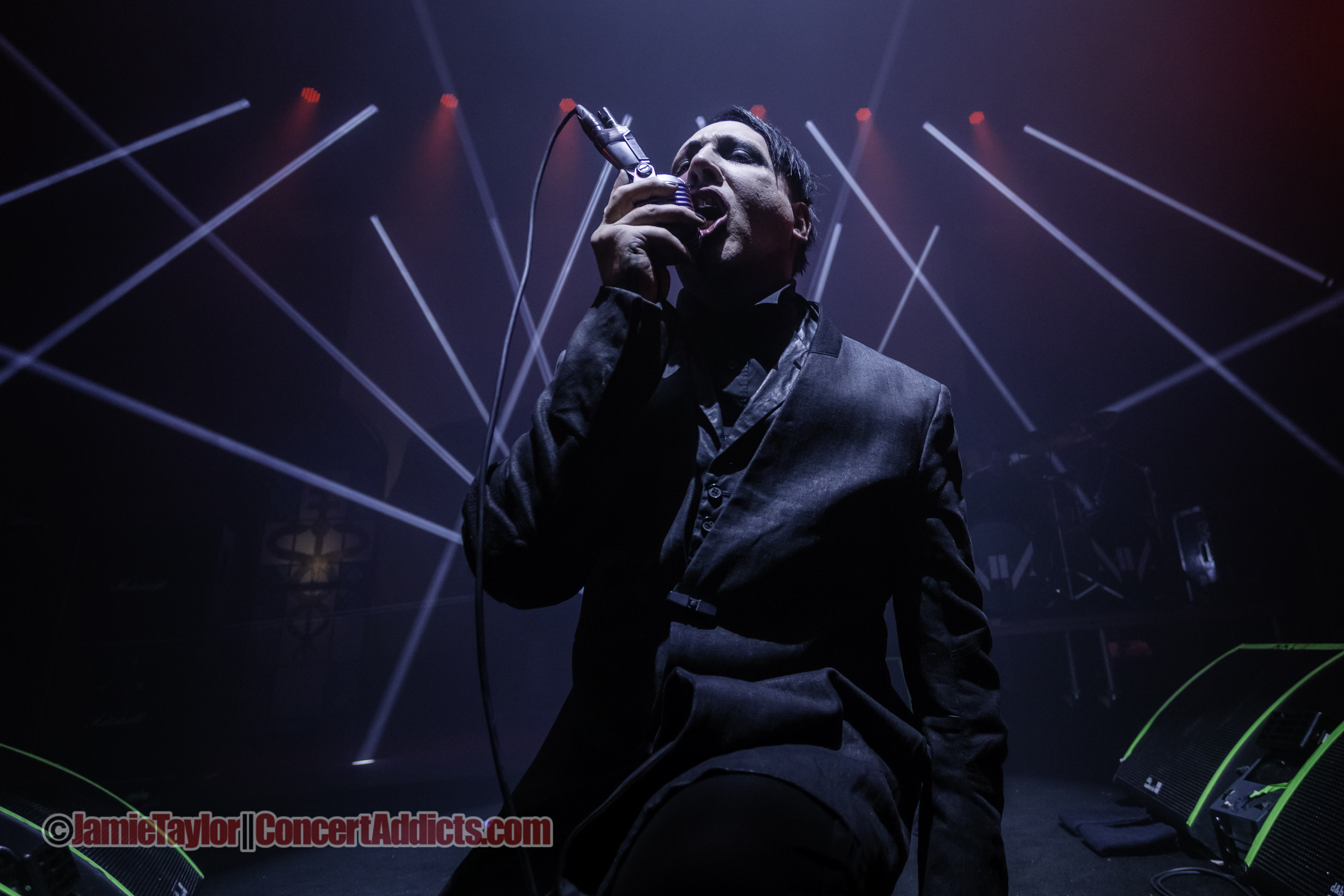 Vancouver’s Queen Elizabeth Theatre played host to the Hell Not Hallelujah tour, a savage and passionate performance by one of the world most controversial musicians, the infamous Marilyn Manson. Brutal and jarring in tone, attire and attitude, Manson and company delivered his uncompromising mix of post punk, goth rock and metal.

From the first notes of a dark reworking of Mozart’s “Requiem”, Manson quickly captured the attentions and imaginations of the audience as a steady drum beat emulated from the darken stage. The fragile atmosphere hung for a calm, illusionary moment before brooding bass and the grim yet succulent guitar riff of the group’s new single, “Deep Six.” Manson himself quickly appeared from the shadows in front of a large backing image. The massive Frankenstien-esque backdrop echoed an image of his new album’s stage persona The Pale Emperor; Manson’s face bore a heavy cover of white make up and blackened, shadowy eyes.

Shifting vocal styles from his signature, glam inspired drone to spine splitting screams, Manson still looks and sounds the part despite subtle effects of age. Melodic, brooding and considerable more dynamic than his previous work, Manson’s new record, the Pale Emperor, displays a surprisingly strong kick. Songs like “Killing Strangers,” “”Cupid Carries A Gun” and “Third Day of A Seven Day Binge” stood out among many tried and tested fan favourites, confirming that Marilyn Manson, the popularly christened Anti-Christ, is anything but washed up.

Performing most of his renowned and celebrated material, Manson’s setlist included many violent fan favourites like “Disposable Teens” and “mOBSCENE;” careful to play his signature standards, Manson appeared a fish in water as he splayed snarling atop his centre stage monitors. The man himself wore the blackened leather and grim makeup that the audience has come to expect and demand; the stage was adorned with personalized stain glass windows framed in gothic styled arches. After bulldozing through the militarized rhythms of several fiery rockers, Manson initiated one of his signature covers, a taunting, gothic take of the Eurythmics‘ “Sweet Dreams (Are Made of This).” Triggering a particularly enthusiastic cheer from the crowd, Manson’s rendition is one of the classic song’s most notable interpretations.

Judging by the audience’s enthusiasm, Manson still commands a formidable cult following and continues to be revered for his staggering tone and his vivid reflections of the often grim human experience. After so many releases, Manson and company have crafted more high grade material than can be played in a single evening’s set. Performing a string of singles, including “The Dope Show”, “This Is the New Shit” and “The Beautiful People,” Manson and company ended their set with a particularly vicious run through of Antichrist Superstar’s “Irresponsible Hate Anthem,” to the coarse delight of the crowd.

Returning to the stage after a brief respite, the group shifted atmospheres with the closer “Coma White;” playing the dreamy and dark-veined finale track ofMechanical Animals’ seminal finale, Manson stood in passioned stance under blue spot lights and a shower of confetti. Manson’s infamous stage presence still riles up his devoted fan base; his image, like his music, displays legendary talent and continued growth in his renewed gothic image. Though many of his contemporary artists have stagnated in their artistic expression, his creativity still circulates. Marilyn Manson puts on a show. The pale emperor still rules.