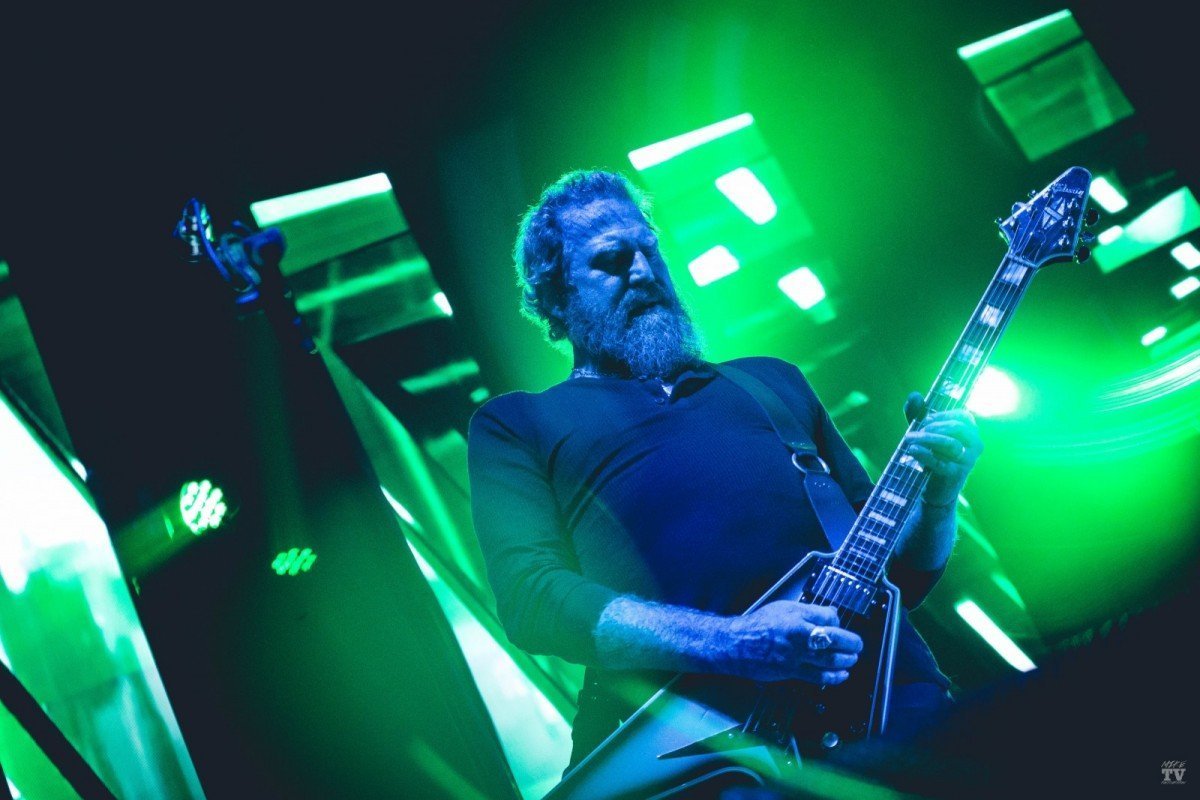 It is a placid Monday evening in Belfast, yet in a flurry of steam, rubble and fluorescent plasmic glow stampedes the prog-metal mammoths Mastodon, here to kick off the opening night of their European tour in the grandiose Ulster Hall.

Mastodon’s history in the city is the stuff of local legend, making frequent and regular returns to a city occasionally ignored on the touring circuit, even solidifying their place amongst hordes of local grizzled, bearded men on the set of locally-shot Game of Thrones on numerous occasions.

Anticipation for this event has been abuzz for months since it’s announcement and certainly shows on the faces of most in attendance tonight. Waiting patiently with bated breath to bear witness to the glory of Mastodon’s latest output – 2017’s Emperor of Sand making it’s Irish debut, it’s not long before we are confronted face to face with the beast, charging into “Iron Tusk” after some obligatory yet sincere ‘hellos’ from the charming and affable members of the band.

Without hesitation, next up we’re submerged head-on into “March of the Fire Ants”, and at this stage it becomes clear, we are in for something really quite special tonight. Indeed what unfolds is a 90-minute dream-like sequence of seldom heard rarities, deep cut gems and psychedelic visual feasts. Connoisseurs rejoice!

Instant classic from Emperor of Sand, “Steambreather” brings us on an astral voyage, with the room beginning to resemble a volcanic alien planet, purple and green gases billowing from the stage. We are guided through this perilous terrain only by drummer/vocalist Brann Dailor’s sea shanty-like cautions, emphasized on parts with incredible harmonies between him and Bassist Troy Sanders.

Closing out the song, guitarist Brent Hinds and Sanders share an immediate and glowing grin – clearly delighted to be back playing with one another.

“Toe to Toes”, a gem from the band’s 2017 EP Cold Dark Place is a track signified by impeccable and extreme time changes, complimented massively by equally mechanical visuals displayed behind the band, whilst they stand locked in sync, bottom lit as if totems set alight. Sanders’ roars are perfectly visualized with maniacal stares and strained gurns, all whilst sporting a new addition to his presumably sizeable Stiff Little Fingers t-shirt collection—local legends he has represented on almost every appearance in the city!

With the audience totally and utterly mesmerized for the duration, it comes as a jump-inducing shock when the voyage of “Toe to Toes” draws to a close, the uproarious applause that the band is met with, with Hinds eager to play it up.

One of the highlights of the night is the reintroduction of “Sleeping Giant” into the mix, from 2006 classic album, Blood Mountain. With Mastodon’s iconic twin lead guitar in perfect synchronicity, co-guitarist Bill Kelliher and Hinds swill along the meandering passages of the climb to summit Blood Mountain. Cheers from the captive audience pick up on such passages. With such ruckus occurring in the Ulster Hall, surely adding in Sanders bone-liquefying bass reverberations on the songs close out is enough to wake up local giant Finn McCool from his slumber. Be afraid!

Dailor, sat behind a modest kit, unusual for a prolific prog drummer, is on point, vocally and percussively, attacking the instrument with Neil Peart-like precision and ferocity. Demonstrated impressively on “Precious Stones”, it is a wonder to behold as he is able to reel off lyrically complex lines, whilst making his way around every nuance of the kit every few seconds like an octopus. Except this “Octopus” has friends…

Along for the ride around Europe is Mastodon’s longtime collaborator and friend, Neurosis front-man Scott Kelly, who contributes irreplaceable vocal additions to the last third of tonight’s set. Many audiences this side of the pond, however familiar with Kelly-featuring songs in a live setting, perhaps have not heard them with such authenticity. A great example of this is on “Crystal Skull”, here utilizing Kelly’s iconic roar on key sections. Whilst being a song regularly included in every set since it’s 2006 premiere, tonight it comes across as if played with every bit as much enthusiasm as the very first time, as Hinds beats his chest after unfurling a banjo-esque solo section to wrap up the sprawling tune-up.

Never ones to end on a low note, Mastodon draw tonight’s proceedings to a close with three off-the-bat epics, beginning with title track from 2009 magnum-opus Crack The Skye. This presents another chance to demonstrate a tightly synchronized unit, moving and playing in tumultuous rhythm, with Kelly now featuring on guitar too. The performance has the audience utterly captivated as if in infernal possession, but Lucifer can’t have this one, this is Mastodon’s home-straight. Following up with a rendition of orchestral proportions of “Diamond in the Witch House”, visuals complement a mood of megalithic construction as if building a monumental shrine, paving the way for set closer…

“we’re going to try something new…not too crazy, but new… let’s give it a go.

Unleashing anarchic frenzy amongst tonight’s spectators, Kelly finally issues Captain Ahab’s orders to the ship’s crew, bringing us the sensation of being on a capsizing vessel, certain doom impending. Smoke billows again from beneath the band. Our voyage suddenly draws to a close, with many short of breath and finding their feet, hugs are exchanged amongst the survivors. Mastodon has laid waste to our city once again.

Catch Mastodon on this thrilling Euro jaunt while you can!