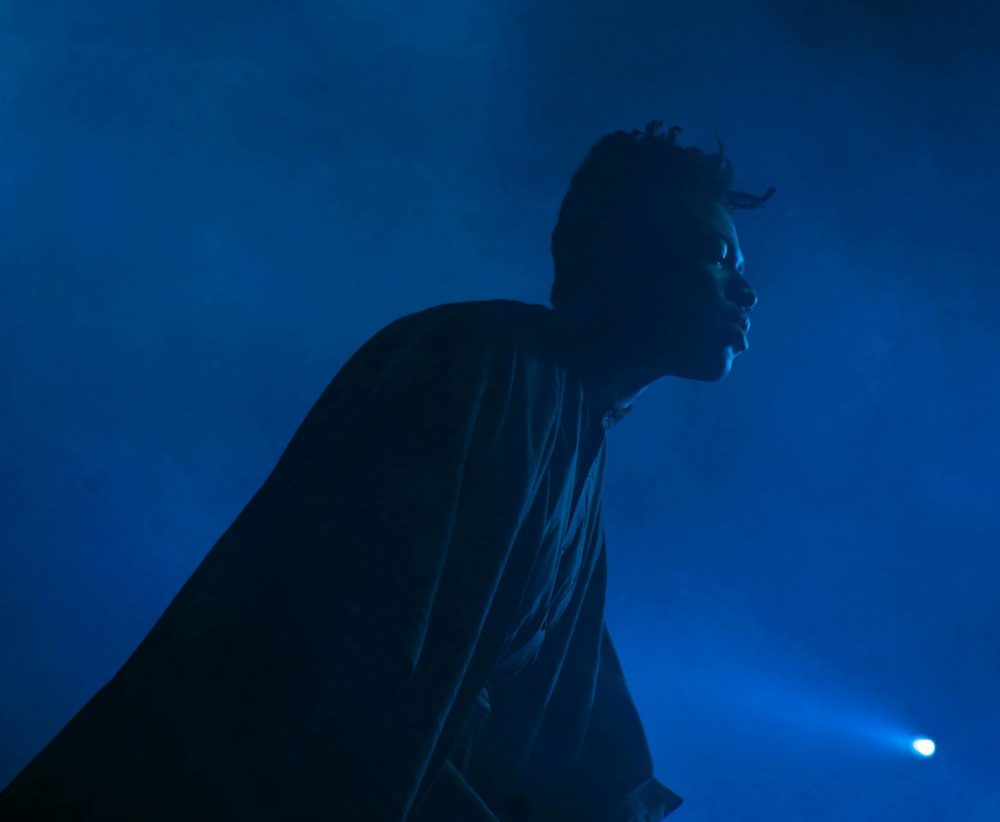 Moses Sumney and opener Angelo De Augustine came through Vancouver this past Saturday, September 30th and made a stop at St. James Hall, a lovely little cathedral nestled amongst the old, wooden houses of Kitsilano. Arriving straight from Portland, this was set to be Sumney’s first ever headlining show in Canada.

Angelo De Augustine, who I was not familiar with before the show, played a 30-minute long, one-man set on his guitar, singing gentle, lovely songs about heartbreak, sentimentality, and existentialism. He played softly and sang in a hushed tone all throughout. Although I prefer my vocals with a bit more timbre, a bit more “oomph”, De Augustine is a talented and measured vocalist with straight-forward, beautifully simple lyricism to match.

Angelo De Augustine finished his set with a palpably bittersweet song that he wrote for his ex-girlfriend, whom he admitted to still being in love with, just days before she broke up with him. It took a lot of bravery for him to play that song, let alone to tell us all the story behind it. It was the strongest part of his set and left the crowd cheering and ready for more.

It took another 20 minutes or so before Moses Sumney et. all took the stage but, once they had, they wasted no time in captivating the crowd.

Sumney began with a rendition of “Incantation”, the final song from his 2016 EP Lamentations. The lyrics of “Incantation” are in Hebrew; despite not knowing the language himself, Sumney learned a Hebrew hymn phonetically and performed it with perfect pronunciation and the breath control of a practised cantor. Sumney stood up on the pulpit at the front of the room, towering over the crowd at six-foot-lots, wearing a black long black cape-suit that stretched down to his feet. He looked like an extraterrestrial being, or something, speaking in some language that, to most people at the show, was likely indistinguishable from if he were speaking in tongues.

Although the crowd was initially hesitant to cheer to raucously – pews are not generally associated with boogying – we all warmed up rather quickly once Sumney nudged us to drop any pretensions. After a long silence following the end of “Incantation,” Sumney scanned the crowd, leaned up to his mic, and casually said, “cool”.

The crowd erupted into cheers.

For the rest of the show, we all happily obliged him. I’m not usually a screamer, but I was hollering throughout the show and even quietly muttered some affirmations to Moses, like, for example: “g*ddam he’s so cool,” and “what the – how’d he even do that?!”

Sumney was working with a mixing board, vocal overlay software, five microphones and a shiny, red, electric guitar. In using so many microphones and the various mixing and overlay software, Sumney was able to create vast percussion sections and complex melodies simply through clapping, breathing, clicking, snapping, hissing, and tapping on his microphone. Furthermore, by being so heavily mic’d, he could get across the subtleties of his vocals in a way that really blew me away: a dry, desperate, crackling wail would be performed once, looped, and then, somehow, become an integral part of the song’s structure. Watching him build up the structure of “Lonely World” from the ground up was one of the most enthralling, otherworldly musical experiences I’ve ever been privy to. Here is a video of Sumney similarly building “Lonely World” from scratch, live in Houston:

Sumney was joined on stage by two other musicians – one a full-time guitarist, and the other doubling as saxophonist and band bassist. I wasn’t sure exactly what type of saxophone was being used, but it sounded unlike anything I’d ever heard before. At some times it reminded me of a clarinet; at other times an organ. Again and again, throughout the set, I was amazed by the gigantic, orchestral sounds that the three men were able to make together.

After the show, Sumney came out to greet the fans who decided to linger about the tiny church hall. I was one such fan, and I told him I was blown away and that I was writing a review of the concert. Then I asked him when he would be back.

I’ve been to hundreds of shows in my lifetime, but I totally agreed with Mr. Sumney. The show he put on for us, with the help of his band and Angelo De Augustine, was easily one of the most moving, experiential, and musically memorable nights of my life. I can confidently say that as long as Moses Sumney keeps bringing his tour around my way, I will keep showing up to see him weave his magic.