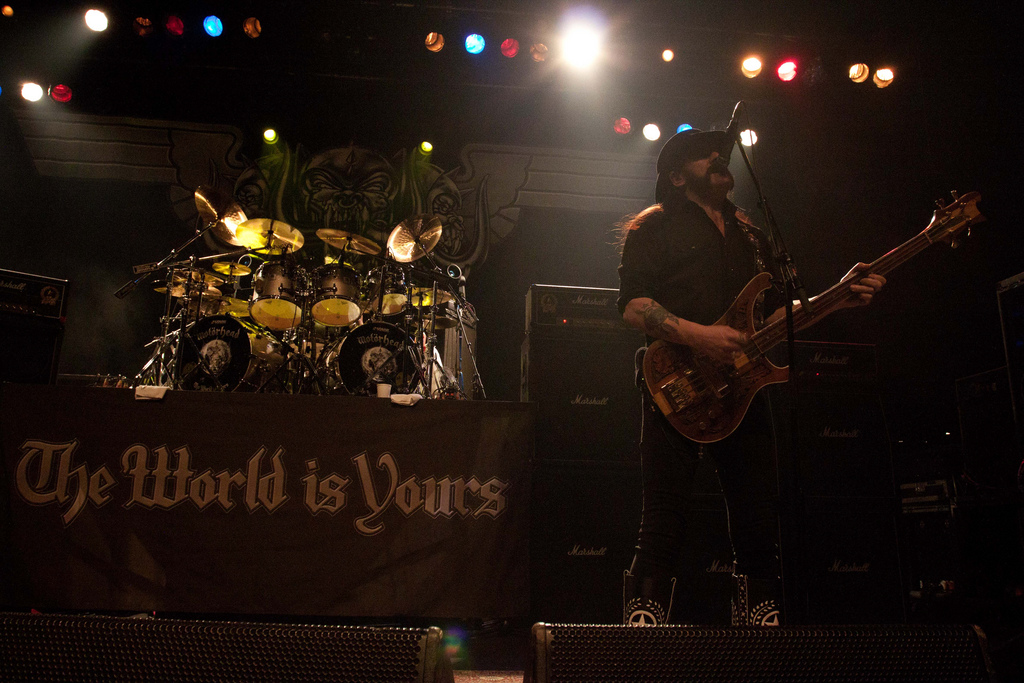 Ian Fraser Kilmister, more commonly known as Lemmy, is the figurehead of metal mayhem. You cannot speak of the genre itself without noting one of its greatest contributors. Last night The Vogue Theater in Vancouver, played host to his band Motorhead, and let me just say they shook the foundation of that rickety old theater. Opening for the legendary act, were Valient Thorr and Clutch, both of whom, set the mood and got those fists pumping early. The night was culminated with an ear pounding presentation but the unkillable cockroach himself, Lemmy.

Reaching the venue, the doors were streaked with condensation. The sweaty bodies of metal heads within, proliferating the air with a distinctly pungent bouquet. You always know when you are at a true heavy metal show, by this fact alone. The crowd was a gathering of denim, leather and ballistic hairstyles. All of them hounding the bartenders for another refill of their constantly vanishing refreshment. With all the excitement electrifying the atmosphere, it was bound to be an intense evening.

I was able to catch the fading moments of Clutch’s set. The lead singer, Neil Fallon, has a certain aggressive charisma on stage that grabs your attention. While Tim and Dan, guitar and bass, rev up the temperature with rock riffs that get your foor stomping and your beer hand bouncing. It was too bad I had not arrived a little earlier to absorb more of their live show, but none the less they were great. I will seek out a future date to really experience them, and gather more of an opinion. For now I will just say they are worth looking into.

The lull between performances was only momentary, or so it felt. It was enough time, to refill your beer, empty your bladder and return to your seat. Given that at a show of this genre, the queues for those two activities are excessively long. It was now time to dig in, and rock to one of the greats. The three Motörhead members all strolled on to the stage, in their usual nonchalant manner. Phil Campbell, guitar, and Mikkey Dee, drums, tested their equipment for a couple of seconds, but Lemmy, with no care just grabbed the mic and pounded into the set.

The one thing you need to know about the almighty Motörhead, is they lock their volume knobs at 12. The shear pressure of those speakers blasting you in the face with that thick, emphatic beat, topped with those crusted vocals, is enough to leave most def for days. When Mr.Campbell, strummed his axe, you could feel the sound waves bashing into your chest. As Mr.Dee rapped to the beat on his multi-component drum set, your heart changed its rhythm to compensate for the rhythmic influence.

The draw back of this venue, is that the acoustics are not that great. Near the front the vocals are washed out and muddy, it all seems to blend together. You do however get a better arrangement close to the back of the house, but then up in the mezzanine it drains the bass. If you were lucky enough to be near the last few rows on the main floor, you got the best seat in the theater. You could clearly here the prose of Lemmy as he crawled his way through track after track of metal nostalgia. Topping it up from time to time with a piece from the new album, The World is Yours.

All in all the show was great, and went off without a hitch. The band was laid back and really rocked the entire crowd, regardless if you could hear it clearly or not. Those in attendance were, for the most part, to in the moment to catch any lyrical mistakes or missed notes. It was a great show and a great night. When it comes to Motörhead you can always expect this level of delivery.