In a country more accustomed to traditional Irish folk, Belfast got a taste on Monday night of the various depart of a folk tradition from across the pond. Stalwart figures on the anti-folk, chamber pop, astral-folk, rain-core (call it what you will or call it just plain awesome) scene Mutual Benefit, challenging every convention of what is possible in this genre, kicked off their UK/North America tour here in Belfast. Although the numbers were few, those in attendance were granted an incredible auditory experience.

With the opening act, the Empire burst out in some cozy, sweater-weather folk for a crisp autumn day as the red glow of space heaters beamed amber on the ballroom plighted with a broken heating system. The snug song-stylings came courtesy of 100 Watt Horse, touring here as the band’s solo iteration that is simply founder George Pettis.

Pettis teased out lush acoustic melodies that stimulated every ion and had me sighing in the nostalgic vibes, my head pouring into my hands as I leaned in to listen. His deep, woodsy voice cast stories over the rich guitar picking and toe tapping tunes, his (Andrew) bird-like whistle ringing out to lift the weary soul. 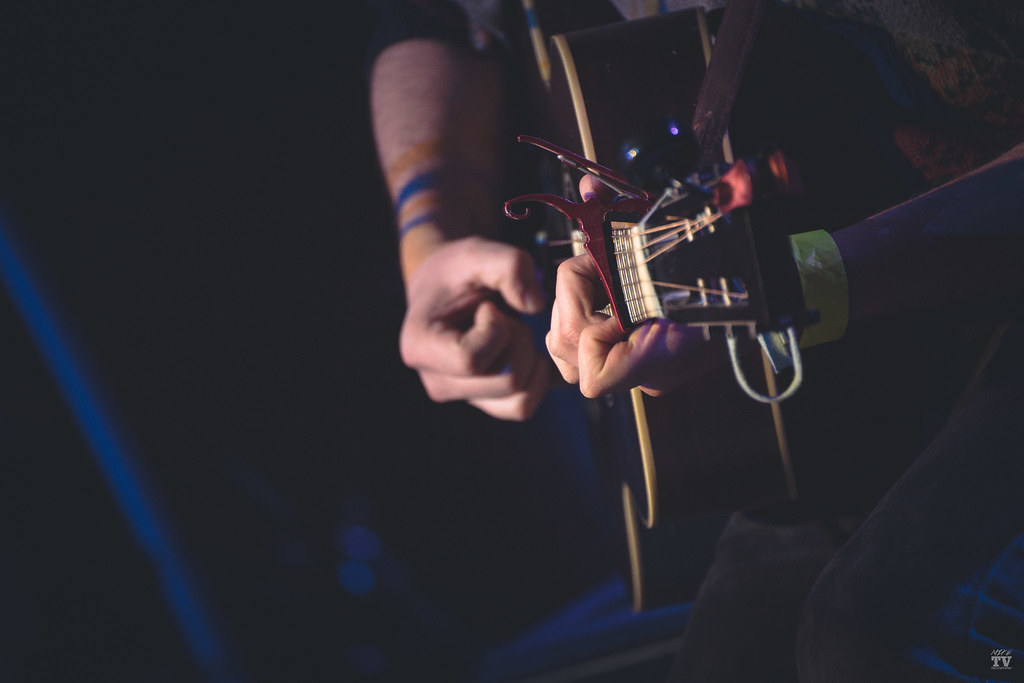 Pulling out classic folk chops from a long American tradition, 100 Watt Horse seemed to step out of a different age in this stripped back performance. Yet Pettis pulled us into the present with his explorative lyrics, addressing not only the mundane qualities of life and idiosyncrasies of relationships, but some of the looming anxieties of our generation. “This is a song about Tennessee. And coming to terms with your own death. But mostly Tennessee,” Pettis chatted affably between tunes with just a hint of gloom.

Seeming to sample some tracks from a semi-unpublished repertoire, certain gems hit a chord, such as “On the Way Down”, a self-professed love song—nerdy and endearing, warm and funny. The overall set reflected a departure from the band’s experimental genre-bending recordings, marking an emerging maturity. Quirky creation “Terrible Life Choices”—part jazz, part poetry—left the audience scratching their heads (in the best way possible) and a final offering “Atlantimals” left everyone feeling warmhearted with lyrics, ‘Home is where you want to, friends are who you need to, life is what you get to, and love is what you’ve been through.’

Mutual Benefit hit the stage, initiating a dream sequence with their opening. Creating sounds like the humming of wine glasses in harmony, the musicians built a soundscape of tranquility as if to lull everyone into the peaceful mindset recommended for taking in their set. As the overwhelming sound fluttered away, front man Jordan Lee paused to simply appreciate the moment, inhaling and exhaling, remarking, ‘Ah, such a good intro,’ and smiling widely. 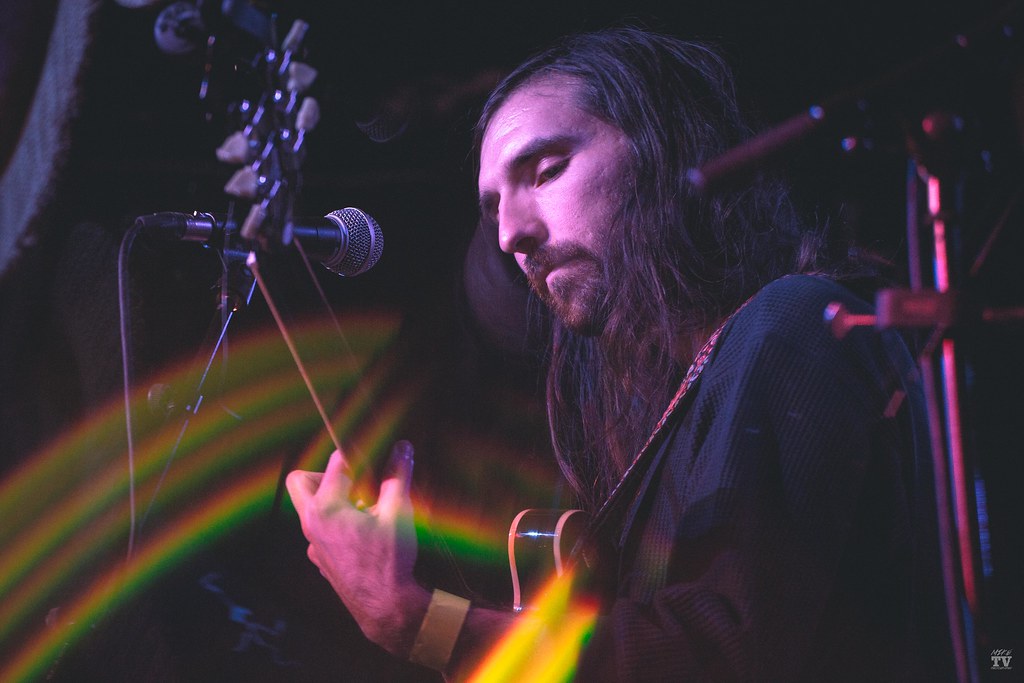 As the band sunk into their set list, the sweet humming of the violin and warm tone of the slide guitar was like painting a picture of a perfect morning, maintaining it perfectly frozen in time with ever-present lyrics. The musical creations were like Buddhist philosophy set to sound. Lee’s tinkering on the keyboard set to loop cast electronic sounds like skipping stones over the calm sea of songs as he delivered powerful vocals as well as guitar.

Immediately I was struck with the magnitude of the sound. A mere three-piece collective was managing to create a string symphonic sound with just one instrument each and some pedals. The accompanying guitarist was like an aural shape-shifter coaxing his apparatus to sound like steel drums one moment and a cello the next. The violinist, in addition to seducing us with silky bowed melodies, matched Lee’s balanced alto with brave harmonies. 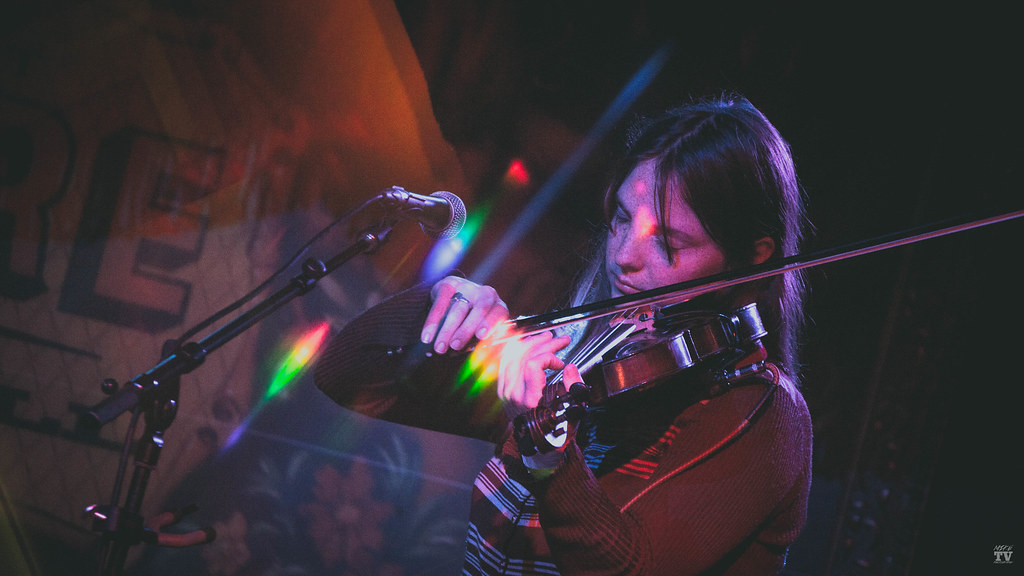 Between all the earthy, nature imagery and pacific hippy sentiments I was reminded of Sufjan Stevens and the Fleet Foxes, but as Mutual Benefit showcased songs off their latest release Thunder Follows the Light, I heard a unique sound with clarity of vision. With lyrics like minimalist poetry, haiku-like even, the new album brings all the best qualities of past endeavours but with ever more sage wisdom and restraint. Steering things back to earlier albums with happy little tune “Not for Nothing”, I could see long-time fans of the band in the audience light up with joy to the feel good strains: ‘And though at times we lose our way, Home is closer every day…’

Lee is a gifted songwriter with a gentle touch, sending melodies sailing out on little paper boats, showing vulnerability as he sings, ‘I’m so afraid to feel this way again’ in “Skipping Stone.” The restrained feedback of guitar and tremelo violin, on the tune created a beautiful marriage on stage. The band closed the formal set with “Strong Swimmer” debut album Love’s Crushing Diamond, a lilting and refined composition integral to the fabric of that seamless album, and equally crucial to a staggering live performance. Open to requests from the crowd, Mutual Benefit spun two final webs of musical intricacy, including “Advanced Falconry”, songs which would continue to resonate long after the band had left the stage in the hearts of those present.