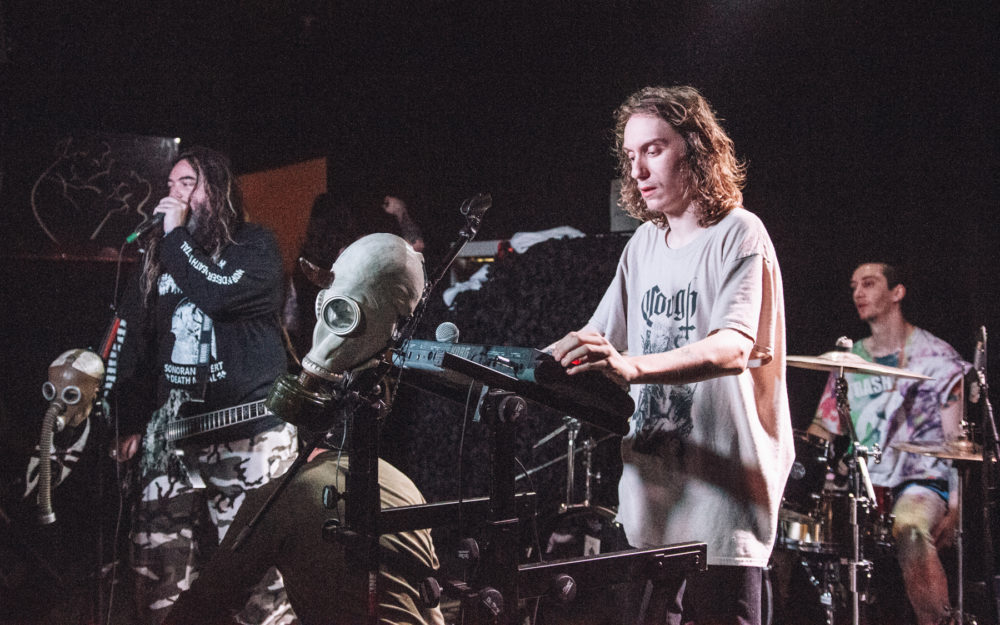 It’s not often you get to see a major signed band play a 200 capacity venue but it is even more rare to see them play a 10+-year-old album from start to finish. One of metals most iconic frontmen Max Cavalera is notorious for several of his bands; Sepultura, Soulfly, Cavalera Conspiracy and one particular side project, Nailbomb. This band had only ever released one studio album called ‘Point Blank’ in 1994. To this day, there are many musicians and fans who swear it is his best work. The Brazilian frontman has also passed down his musical legacy to his kids, two of which perform with him and in the opening act, Lody Kong.

Some musicians’ kids have clearly been spoilt, such as over the top gear, massive tour slots, their own techs and with little actual talent before even writing a first full-length album. However, for brothers Igor Jr. Cavalera (bass/vocals) and Zyon Cavalera (drums), this was not the case. Lody Kong loaded their own gear onto the stage, did their own soundcheck and made sure people knew what was coming…. nothing but an onslaught of American sludge metal. Their pure raw talent instantly created chaotic energy in the crowd and opened up the floor. Travis Stone was leading the guitar for the two brothers.

Main support act Today Is The Day has been around more than 25 years with their extreme metal and noise rock sound. Original frontman and guitarist Steve Austin provided ferocious lows and high pitch screams. A particular highlight of their set was a Black Sabbath cover of ‘Sabbath Bloody Sabbath’ which had the whole venue singing and playing air-guitar.

Now, before Soulfly came on to perform as Nailbomb, several security and road crew came to warn us not to knock the monitors directly on top of the 2-foot high stage. Within a few seconds of the first member coming on stage, the crowd surged forward, crushing everyone at the front (myself included). When Max came on, it was bloody murder, which he clearly wanted. His signature “Un, Dos, Tres, Cua” never fails to make everyone lose their minds. Igor Jr. stood next to him letting rip on the vocals (originally by Alex Newport) and engaging the opening synth for ‘Wasting Away’. Sure enough, the monitors had slid forward and the stage had become even smaller for the musicians. Max smiled and said how much he “loves this underground shit”.

After a couple of songs being bent over the monitors and Max’s guitar pedal, it was time to get some air and move around the tiny sweatbox the venue had now become. Zyon Cavalera was behind the drums again, making it a Cavalera frenzie. It was truly amazing to see 3 family members blasting out some of the heaviest music on the planet. Alongside them was also long lasting Soulfly member Marc Rizzo providing the lead guitar and Mike Leon on bass. Halfway through the set Marc was given the limelight for a guitar solo as the other members left the stage for a much-needed breather.

Towards the end of the set, Max kept up the energy and crowd participation with several callbacks, “Nailbomb” chants and hand gestures. This was truly a unique show and the crowd was left with barely a leg to stand on.