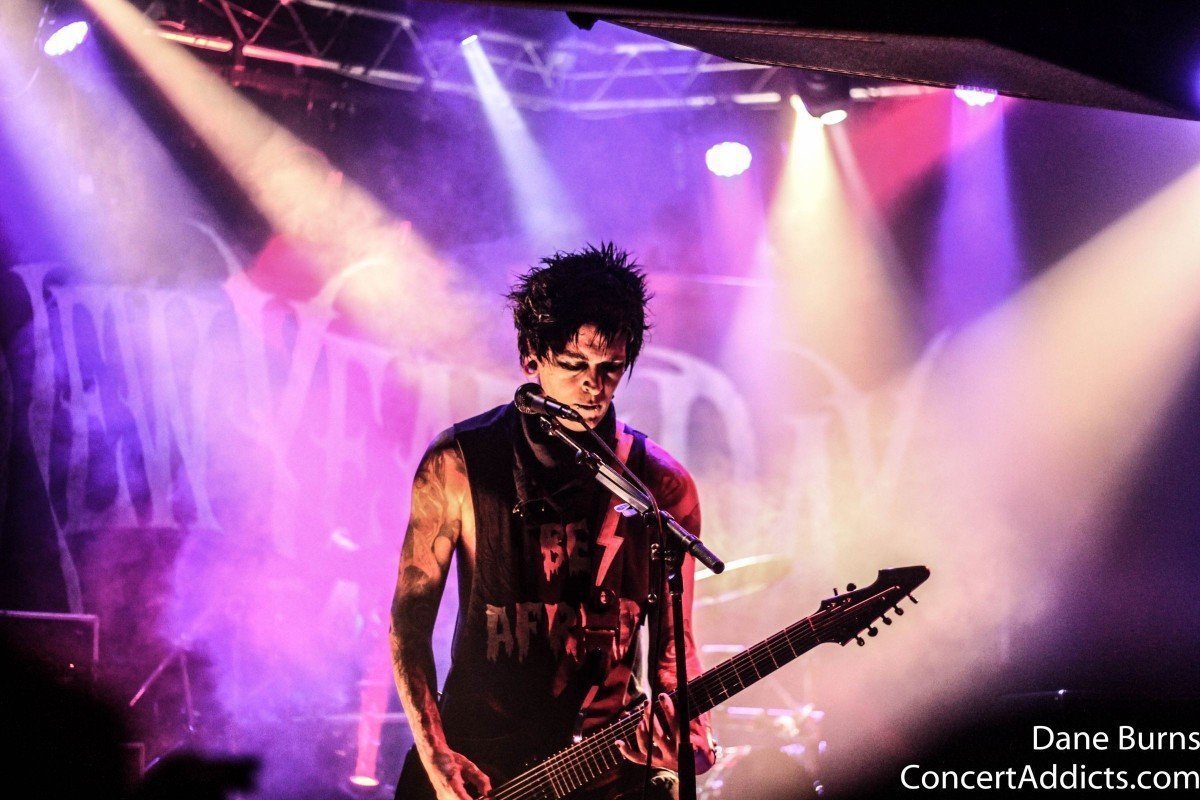 The Whisky A Go Go was buzzing last Sunday with the voices of tweens, teens and adults lining the streets of Sunset Blvd to see a great upcoming rock band: New Years Day.

When the VIP guests were done exiting the venue fans were allowed to begin entering the venue where they crowded against the stage and filled the room to max capacity. As the heat rose and the fans began to raise their voices in chants the first band Heartbreak Hero’s kicked off the show with a great rock/punk style. They did many originals and covered a few songs from the fans favorite bands. Following them were the last two non touring but opening bands Danger Escape & Enter The Paradox. Both bands did a great job at warming up the crowd and getting people to move their feet during multiple songs despite the lack of space and excessive heat.

The Relapse Symphony kicked off the touring bands set with great passion and old punk rock roots. For a young group of guys they put on a show that had fans yelling for more by the end of the set. Fan favorites Eyes Set To Kill followed up TRS’s passion by playing songs such as Where I Want To Be, Little Liar, Darling & Infected that had fans raving and singing along. Despite the bands changing line up and being around since 2003 this band has yet to miss a beat and their vocals still sound great. Get Scared was the final band before the headliner. This band brought in a heavier set with some songs titled Buried Alive, Told Ya So & Sarcasm. This led to a group of three to five guys opening up a mosh pit towards the back of the crowd where bodies began flail in every which way while energizing the band and making Get Scared’s set that much better.

At 10:30pm the Whisky erupted. It was time, New Years Day has arrived and they were about to give their fans whom lined up hours early a show they would not forget for years to come. With a change in the lineup for the tour the official line up was Ash on lead vocals, Nikki and Jeremy on guitar, Brandon on bass, and Trixx on drums (I wonder why they call him Trixx?). The setlist consisted of the following songs: Kill Or Be Killed, I’m No Good, Otherside, Relentless, I’m About To Break You, Bloody Mary, Left Inside, Let Me Down, Death Of The Party, Defame Me & encore songs Hello Darkness & Angel Eyes. The band had fans from left to right jumping, screaming, hands waving, people reaching for Ash Costello’s magical touch and for the sounds of rock n roll Hollywood has been craving. The band did an impressive job by not only selling out The Whisky on their first headlining tour, but also bringing a great stage performance. Fans in the audience remained in awe during the whole performance and walked away happy at the end of the night. I even overheard one girl saying for $15 she would go everyday! This band has the greatest fan base I’ve ever seen from physical appearance of copying the split red and black hair, multiple merch items and VIP laminates to sharing multiple New Years Day photos on social media. Needless to say the band loves their fans and the fans love this band. As Ash mentioned at the show they’re family.

Make sure you catch New Years Day on their first headlining tour & pick up their new album OUT NOW titled Malevolence!